A long time ago, in a far, far away place, some of us used to train wearing ankle weights. This type of resistance training, once thought to be a good idea was eventually abandoned by those trying to improve both strength and stamina as it became apparent that adding unnatural weight to one's stride below the knee caused injury. Does anyone else remember that feeling, though? Sort of felt like the runner was trying to race through a foot of water. Uphills were ridiculous. I was one of the lucky ones. I've only had to have one knee cleaned out one time. Knock wood.

As you rip that ugly melon cradling your intellectual capacity away from that warm pillow on Friday morning, you'll notice a marketplace that seems to be trying to run while wearing ankle weights. This, even though the major indices (as tech once again shows strength) all stand close enough to the apex of their individual mountains. I told you yesterday in this column that now our job would become somewhat more difficult. Remember what we have discussed in the past. I have several rules that serve as code. Two that scream out for attention this morning would be...

1) Never fall in love... emotion is your enemy when markets get sloppy. You show weakness for a name that has served you well in the past, and Mr. Market will rip that lovely face off.

2) Road-map. Is anything more important than knowing where you're willing to go, and where you're not. Target prices, and panic/replenishment points. If you hold shares without mapping these out, then you are still making rookie mistakes. This aids in removing the emotion mentioned in number one. Cold as ice, baby. No Fear.

Could Be Squalls Ahead

Not a surprise. The president has now approved the expected tariffs on $50B worth of Chinese imports. There has been no quantifiable improvement in negotiations on China having forced US businesses to transfer cutting edge technology to their Chinese partners. The US played nice on ZTE (ZTCOY) . China played nice on (QCOM) / (NXPI) . Today, you can expect to hear some detail on just what will face a 25% tariff and what might not. China has threatened to retaliate in kind if the US went ahead with these tariffs. Bah !! Kind of tough to call it retaliation when you're the guy who actually landed the first 30 or 40 punches.

Domestic economic growth is roaring. No doubt. Transitory? Perhaps, maybe even likely. The IMF indicated earlier this year that global synchronized growth was in a good spot. More could be expected this year. You may have noticed... the IMF kind of stinks at their job. Major economies are still growing, but gang... it's getting real sloppy out there. The European Central Bank just downgraded their outlook for Eurozone GDP. The Bank of Japan ratcheted lower their vision for domestic inflation this morning. Both of those central banks are in the midst of tapering asset purchases. Both show no inclination to raise interest rates any time soon. China? Happen to catch the macro released late Wednesday. The Chinese economy badly missed expectations across the board. Retail Sales, Industrial Production, Fixed Asset Investment. O for three. Now, head for the dugout, sport. This puts the Federal Reserve way out in front of the pack on policy, and has placed some unexpected strength in the US dollar versus it's peers. That does not help large cap US stocks. Not one bit.

Shameless Plug Alert. Small Caps could be a place to hide part of your portfolio while the waters get choppy. You could passively invest in an ETF, such as the ishares Russell 2000 ETF (IWM) . My colleague, fellow Real Money contributor Chris Versace and I run TheStreet's "Stocks Under $10" portfolio together. The portfolio ends up, not by rule, but by circumstance... focusing on small caps. Just throwing that out there.

My Friday Plan of Action

Three separate themes keep drumming through my head as I grapple with the environment provided. Another rule... Adapt to what is provided. Force nothing. The retailers took it in the mush yesterday, as did the defense contractors. I have interest across both spaces, and several of you have reached out for help here via Twitter and e-mail.

If you follow me on Twitter, or were in on the Doug Kass Diary on Wednesday, then you know that I took 50% out of Macy's (M) , and roughly 45% off of Kohl's (KSS) that day. Those were nice sales made nicer once Citigroup (C) downgrade KSS yesterday. I still like both, and will look to bring both of those names back to full positions at a discount. They both pay dividends. They both benefited from a short squeeze. This was and is completely tradable.

Now for the defense names where I am far more concerned, especially since I publicly defended the group earlier in the week. Defense budgets we know are going higher everywhere. The North Korea peace dividend is, I believe, already priced in. This most recent weakness is more of a "trade war" thing in my opinion. All of these firms depend to significant degree upon international business. My favorites in the space remain Northrop Grumman (NOC) , and Raytheon (RTN) as I have stated. I will almost certainly add to both of these names today, and where I see value in premiums (at least in NOC), write out of the money puts to raise revenue/reduce basis. As for Lockheed Martin (LMT) , I am not running for the hills, but capital expended, and basis manipulation will be focused on my two favorites.

Now Adobe (ADBE) . The firm went to the tape last night with Q2 earnings. Seemingly all good. Solid beats at both the top and bottom. Year over year revenue growth of a whopping 24%. Even better, Adobe guided the third quarter higher for both EPS and revenue. Both recurring revenue and marketing showed nice growth. Only thing, the shares had been on the run... almost 40% for the year. A visible profit for nearly every shareholder in what looks to be a down tape today. I am long these shares, and my net basis is much, much lower. I bet several of you are in the same boat. What to do? Hmm. 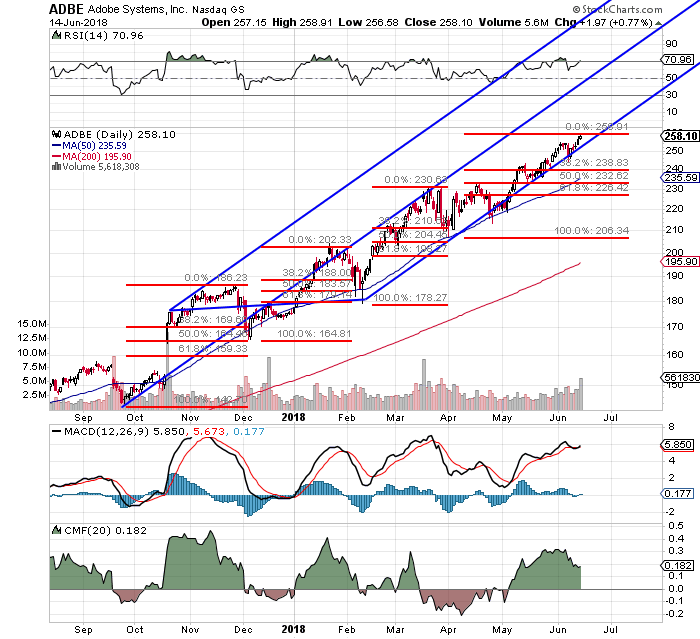 It becomes obvious to the casual chart-watcher that once that opening bell rings at 09:30 ET, these shares will in all likelihood no longer be overbought in terms of Relative Strength. Money Flow will change direction. The daily MACD will no longer be an ally. So, what does the chart actually tell those who are willing to listen?

You can see that since October the name has been a beast. A pitchfork model that has hung in there since then that I have outlined in blue will certainly come under pressure to crack in the early going. What if it does? Where is support?

One also sees that on three separate occasions since last autumn, the shares have been rescued at a 50% retracement of the gain made to the top off of the previous bottom. One also sees that the spot currently stands at 232. The 50 day SMA stands at 235. Somewhere in there is where the panic point lies for me, so at an overnight last sale still trading in the low 250's, I am nowhere near thinking about getting nervous. Q3 earnings will be released in September. September 235 puts went out at 5.85 last night. You will certainly see premiums higher than that for that product this morning. I would be a seller of those puts if anything at all. In the low 250's for the equity. I think seven bucks might get my trigger finger itchy. We'll see.

Adobe (ADBE) No idea if the old targets were public

Fear: Fear is for the wicked.

Get an email alert each time I write an article for Real Money. Click the "+Follow" next to my byline to this article.
TAGS: Investing | U.S. Equity | Transportation | Consumer Discretionary | Technology | ETFs | Funds | China | Markets | Stocks