3M Corp. (MMM) still has one of the best-looking charts in that narrow club of 30 companies that make up the Dow Jones Industrial Average. Prices bottomed out in late 2015/early 2016 around $135 and they look to be headed still higher from here.

However, before we get too far ahead in this bullish story let's check the latest charts and indicators. In this daily bar chart of MMM, below, we can see that prices made a lengthy sideways consolidation patter from June to February. By the middle of February MMM broke out over the chart resistance in the $180-$182 area. Prices are above the rising 50-day moving average line as well as the rising 200-day moving average line. There was a bullish golden cross of these two moving average lines in early January before prices broke out. More often than not moving average signals are late.

The daily On-Balance-Volume (OBV) line turns higher in February, which is a signal that buyers of MMM have become more aggressive with heavier trading volume being seen on days when the stock has closed higher. The trend-following Moving Average Convergence Divergence (MACD) oscillator has been above the zero line since February and is still in a strong bullish mode or configuration.

The weekly bar chart of MMM, below, is also bullish. Prices are above the rising 40-week moving average line. While the trading volume looks to be flat or neutral, the weekly OBV line turned up at the end of January and confirms the rally. The weekly MACD oscillator has been bullish from February 2016 and is still pointed higher. 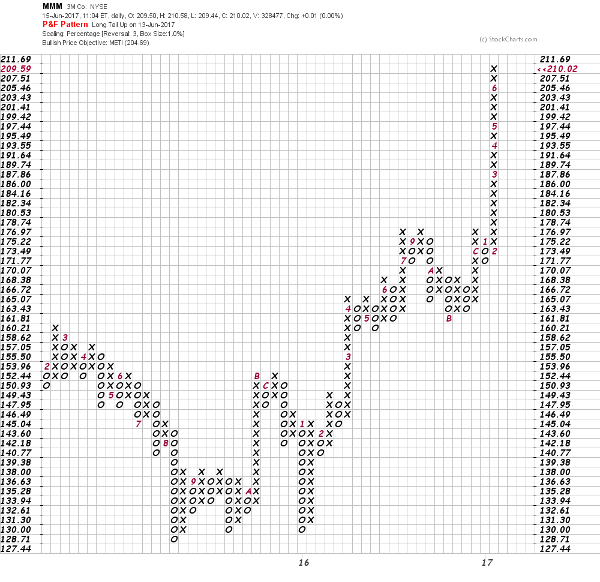 Bottom line: We do not see anything in our favorite technical studies to make us worried about the gains MMM has made over the past five or six months. A decline below $195, if it were to happen, would be a negative as it would mean that MMM broke below the 50-day moving average line and a support level. Investors and traders should use a sell stop below $195 as discipline should never be ignored even with strong uptrends.