Comcast Corp. (CMCSA) has lost about 30% of its price since January but some of the technical indicators now suggest that CMCSA could mount a rally towards the declining 200-day moving average line in the weeks ahead. Let's review the charts and indicators - we'll give you a four-hour window to check them out.

In this daily bar chart of CMCSA, below, we can see that prices made a high in January. The slopes of the 50-day moving average line and the longer 200-day line are bearish. In late March the 50-day line fell below the 200-day line for a bearish dead cross.

The 50-day line has been tested this month and a close around $33 would break the line.

The daily On-Balance-Volume (OBV) line peaked in the month after the price peak and has declined into June. A weak OBV line tells us that sellers of CMCSA have been more aggressive with heavier volume being seen on days when prices have closed lower.

The 12-day momentum study (bottom panel) shows a pattern of higher lows from February. This tells us that the pace of the decline has slowed which indicates that buyers may have been involved on a scale down. This is a bullish divergence when compared to the price action and could be foreshadowing a rally ahead.

In this weekly bar chart of CMCSA, below, we can see that prices are below the declining 40-week moving average line.

The weekly OBV line has declined since January but the weekly Moving Average Convergence Divergence (MACD) oscillator has narrowed and could generate a cover shorts buy signal soon. 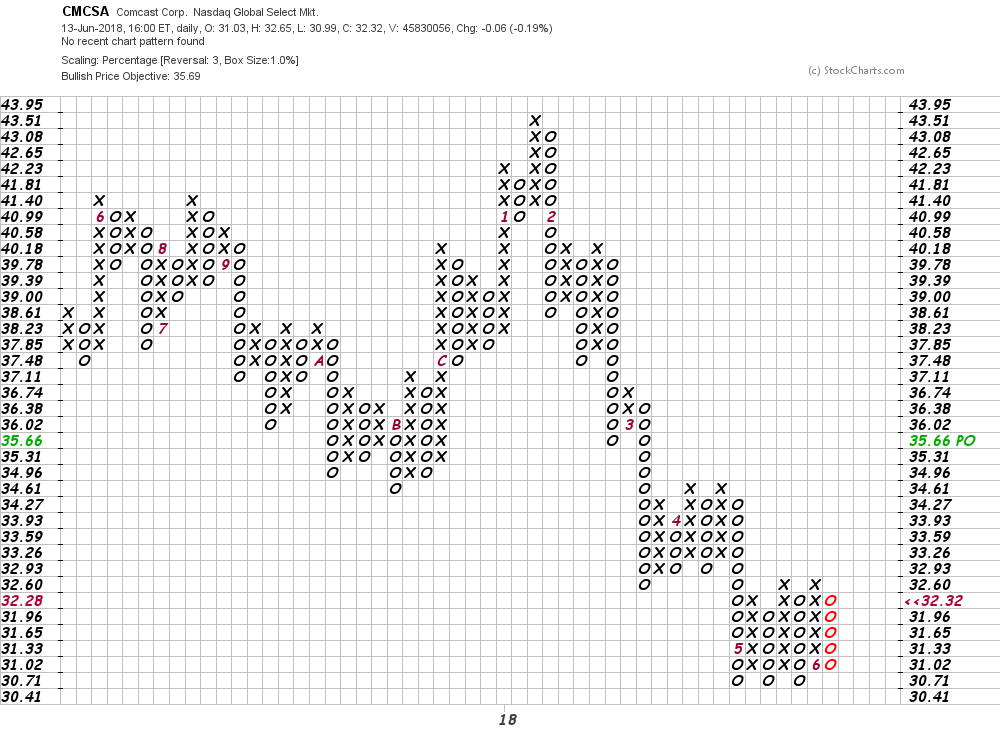 Bottom line: The trend is down but there are enough bullish technical clues on CMCSA to anticipate a rally perhaps into the $36-$37 area in the next few weeks.

Get an email alert each time I write an article for Real Money. Click the "+Follow" next to my byline to this article.
TAGS: Investing | U.S. Equity | Consumer Discretionary | Entertainment | Mad Money | Mergers and Acquisitions | Stocks