All Around The Mulberry Bush

They waited with the anticipation of excited children as the tune ground toward it's own conclusion. The closing bell had sounded the better part of an hour earlier. Pop! The news broke... That can't be right. The reporter on my television just said that the deal was approved with no conditions. Let me check the other channels. Whoa... this must be true. So, it was. The traders were off and running. Who was a pajama trader on Tuesday night? Anyone and everyone. Why? Simply stated... money was moving, and money doesn't sleep. Many were at least mildly unprepared for such a clear cut victory versus the Department of Justice in this antitrust case. Less elegantly, some of us participated because there was movement, there was volume... and it was fun.

So, you thought that after the G-7 rumblings had died down, that after the president's summit with North Korea's Kim in Singapore had simmered, and that after we heard from US District Judge Richard Leon on Tuesday evening that we might start thinking about the Fed Funds Rate, and the dog and pony show that Fed Chair Jay Powell might present. (On that, let me go on the record as saying that my opinion is that there should indeed be a press conference following each and every FOMC policy decision. Finally, a Fed Chair that gets that.)

Well, sport... you will indeed get to focus on the Fed. I promise that within a few hours, that event will become front and center for most of us. That said, the approval of AT&T's (T) merger with Time Warner (TWX) is top dog in financial news right now, and it set off a chain reaction that reverberated across the media and telecom industries.

AT&T and Time Warner announced their intention to merge way back in October of 2016. Now that the road has finally been paved for the two to transform into a distribution, programming, wireless and broadband beast, the speculation immediately turns to the potential for a great land grab in the name of content. Let me remind you that content is king. That is the very reason that the ease with which this ruling passed muster now allows for Comcast (CMCSA) to fearlessly pursue the many assets of 21st Century Fox (FOXA) , including Fox's 39% stake in Sky PLC, that the Walt Disney Company (DIS) had already placed in their sights.

Comcast is now expected to quickly formalize an all-cash bid for those assets that would be of greater value to Fox shareholders than would be the all-stock bid that Disney thought that they had an agreement with Fox on as far back as last November.

In chess, each side has enough time to think out their strategy and move the pieces one step at a time. This board had been set, but there was no time for thoughtful strategy. Down went AT&T. Up went Time Warner. Okay, I think everyone expected those two to move like that as soon as the ruling became public. Makes sense. Now, the expected bidding war. Up goes FOXA, as the obvious chase is on. Down go both CMCSA and DIS as the expectation for a bidding war turns into likely reality. The winner gets to spend much more money than they had anticipated (whomp, whomp), and the loser... well the loser probably gets to watch the suddenly removed discount returned to their share price. Hmm.

Then there's the land grab. The smaller media/content plays. They may add up to less than say... the available assets of a FOXA, but darn it, this business just got more competitive, and what these firms have to offer just got more valuable. Up went CBS (CBS) , up went Discovery Communications (DISCA) Up went Lions Gate (LGF) , and up went Charter Communications (CHTR) . Huzzah. It wasn't just content either, gang. Both Sprint (S) , and T-Mobile (TMUS) , who have already agreed to be dance partners, saw their shares react. Judge Leon's ruling allows their proposed dance to morph from the Lambada into something more realistic.

How I Am Playing These Developments (Guaranteed, Nobody Else Walks You Through These Things in Such Detail) - I am at risk right next to you.

Having come in long some Disney, my first thought is to shore up my game plan in the name, as my position is complex and I would prefer to not have to unwind the darned thing, though even at last night's lows, the position was not yet what I would consider dangerous. It is now obvious that DIS will have to come up with a better bid, or risk losing out to rival CMCSA in pursuit of the content offered by FOXA. There is no short-term win here for Disney. Either they cough up some more treasure, or allow the competition to walk away with what they themselves desire. 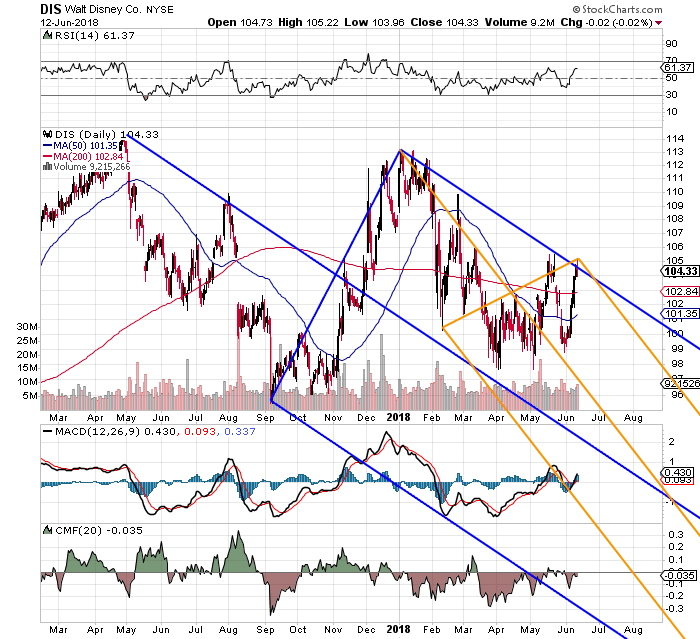 As I have already stated, I come in long (about 25% of what I consider to be a full position in this name). My net basis on the equity alone is 100.02. I also come in short a bevy of put options that when factored in drag that net basis down to 98.63. These puts will expire over a time frame spanning from this July 20th though January 2019, and do not put me at risk of having to add to my equity risk until the shares start trading at $90 and below. BTW, earnings are due on August 7th.

The chart above is now nearly useless, as significant news events always trump short-term technical analysis. ALWAYS. Those news events do not however prevent previously written algorithms from reacting to larger levels in the medium to longer term. What becomes obvious here is the recent double top close to 105, and the double (sort of triple) bottom just below 98. Your 200 day SMA stands at 102.84, and the 50 day SMA lives at 101.35. These moving averages will come into play this morning.

What those long DIS must be alert to today is a break of that 50 day. This would allow for movement as low as the already tested spot below 98. The Pitchforks are displayed here because in my opinion, algos react to them, and there are two possible roadmaps. Both of these models permit for a significant move to the downside (low to mid 90's) should 98 snap. That's why I write puts at unlikely prices when I see premium. Raises revenue while putting one at risk where one sees opportunity if forced. Do I act today? I probably take some profit above par (100), if the 50 day SMA snaps.

Am I afraid? No. Never. Rule to remember... No emotions allowed. Ever.

I Got To Thinking

Maybe (Duh), being I am already in bed with a content pursuer, that I should also throw on set of pajamas and carve out some kind of position in something pursued. I thought, what's cheap enough so that the risk reward would be tilted in favor of a guy just hedging a position. Then it struck me. Discovery is cheap. Eureka. So, your pal infiltrated the world of the pajama traders, and took down a few shares. 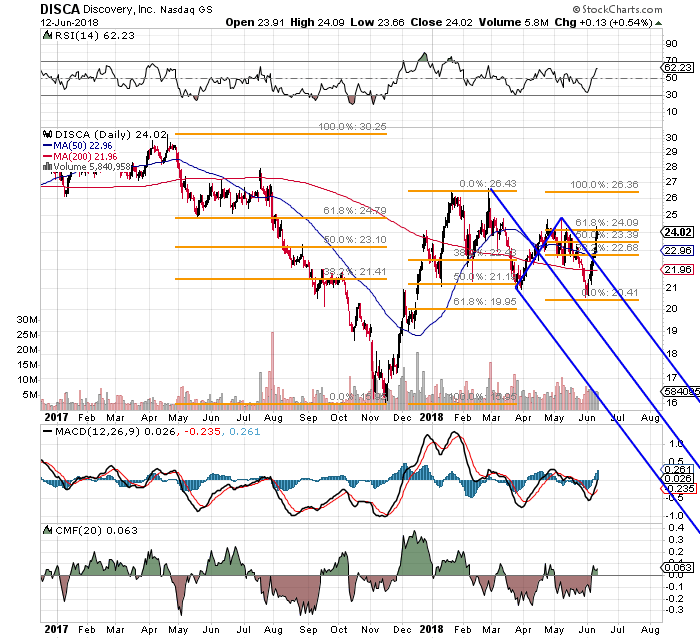 You know these guys, gang. The portfolio of networks offered by this content provider includes not just the Discovery Channel, but Animal Planet, ID, Velocity, and Eurosport. These shares traded as high as 25 this morning. The shares went out last night at less than 7 times forward looking earnings... meaning either that they were dirt cheap or expectations are turning anemic. Sales and Earnings growth have been pedestrian. Cash on hand is rather light, but the firm's assets are more than enough to put it in a comfortable position. The Quick Ratio stands around one and a half, so nobody is going broke anytime soon.

Look, I don't really love this name, but if lions are going to chase gazelles, and I already own a lion, then I better make sure that I also own a gazelle. Heck, that's how Wall Street plays this sport, dudes. This one is cheap enough in both dollar terms, as well as in terms of valuation that I think the risk/reward is worthy of my effort. Rock and roll.

Get an email alert each time I write an article for Real Money. Click the "+Follow" next to my byline to this article.
TAGS: Investing | U.S. Equity | Consumer Discretionary | Telecom Services | Mergers and Acquisitions | Options | Stocks