Jim Cramer created the acronym FANG to represent high-fliers Facebook (FB) , Amazon (AMZN) , Netflix (NFLX) and Google, now Alphabet (GOOGL) . However, in the last five years, with the exception of Netflix, shares of Domino's Pizza (DPZ) have delivered a substantially larger return than any of those names. 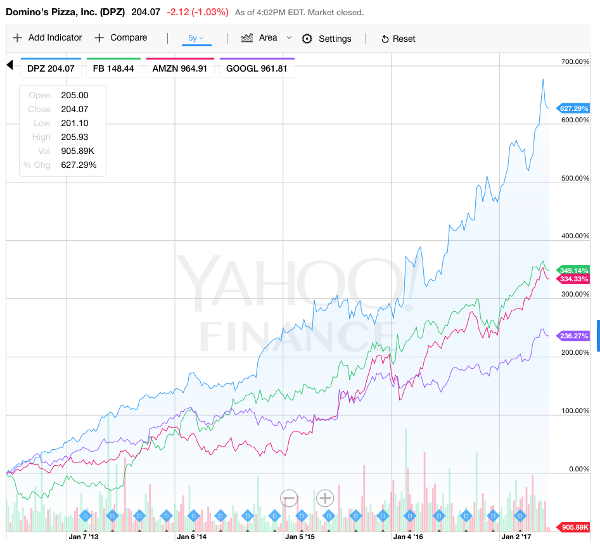 On the call after the earnings release, management said it strongly believes it can squeeze in another 1,000 stores in the U.S. The company ended the quarter with 5,400 locations in the United States. The U.S. pizza market is estimated at $37 billion and expected to grow in the low single digits annually. Over the next three to five years, management believes it can grow domestic same-store sales in the range of 3% to 6% annually and total global retail sales in the range of 8% to 12%

According to NPD Group/CREST research, small independent chains control 42% of the U.S. pizza-delivery business. Independents hold 57% of the quick service restaurant (QSR) pizza business, while Domino's has a 14% QSR market share and a 28% delivery share. So, Domino's management believes there is plenty of share left to take.

NPD/Crest also said it believes the international market for pizza is expected to grow at a consolidated annualized  rate of 3% to 4%, or from $85 billion to $103 billion by 2020.

Domino's is taking share because it reinvented its core product in 2010, improved food quality and used technology to drive sales.

At the current quote, Domino's is trading at 38x this year's earnings estimate and 32x next year's estimate, which is a huge premium in the quick service restaurant (QSR) segment. Typically the QSR group trades at 16x to 20x estimates, which makes me want to wait for a correction in Domino's share price. While I still like the company, I would take an opportunistic approach to Domino's and build a position on weakness.

Get an email alert each time I write an article for Real Money. Click the "+Follow" next to my byline to this article.
TAGS: Investing | U.S. Equity | Consumer Staples | Earnings | How-to | Risk Management | Stocks

The grocery and drug retailer is still in an uptrend, but this technical analyst doesn't like the bearish divergences and a shrinking volume pattern.

With the shares stuck in a tight range, IV for WBA is cheap.

The charts of the maker of snack foods aren't looking as tasty as they did a few months back.

The company behind a diverse roster of shelf and frozen foods sports a big dividend, but that payout may not last because of its large debt.