We last checked in on Snap-on Inc.  (SNA) in late April after a rally. We concluded, "After the recent rapid run-up for SNA, a period of consolidation would be in order. After some sideways price action, traders could probe the long side of SNA and add on a move above $182. Our price target is $210 and I would risk $167."

With hindsight we would assume traders bought SNA around $170 perhaps in May and got stopped out with a small loss at $167. We never got a rally to $182 to add. Prices have continued to slip lower. Do the indicators give us any promise for a rally now? Let's check in again on this Action Alerts PLUS holding.

In this daily bar chart of SNA, above, we find little for the bulls to cheer about. Prices have been in a downtrend since early February and the indicators have weakened. SNA is below the rising 200-day moving average line after a retest and failure from below the line. The 50-day moving average line is bearish and is very close to declining below the 200-day line for a dead cross sell signal. There is some potential chart support in the $155-$145 area from September/October but I don't have a lot of faith in the area.

The On-Balance-Volume (OBV) line has been weak since early February and suggests that sellers of SNA have been more aggressive than buyers. Recently the momentum indicator has indicated a small bullish divergence versus the price action from May to June but it probably won't give us a meaningful rebound.

In this weekly bar chart of SNA, above, we can see that pries are below the rising 40-week moving average line. The weekly OBV line has been pointed down from early February and suggests several months of aggressive selling and liquidation. The weekly MACD oscillator is in a sell mode below the zero line. 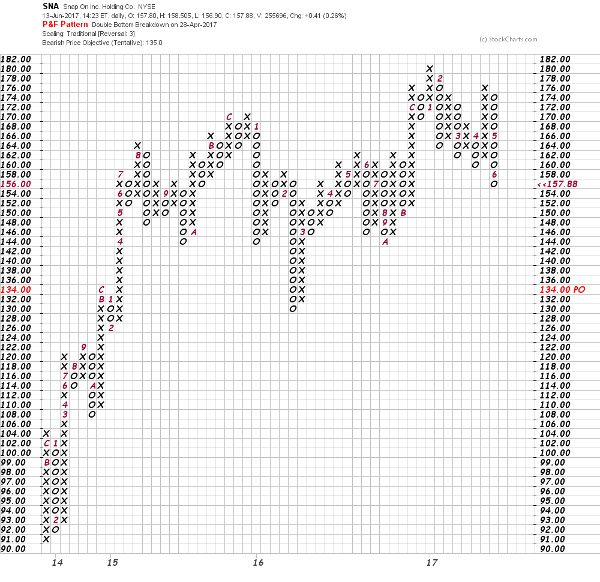 In this Point and Figure chart of SNA, above, we can see a downside breakout at $158. This turns the price action bearish and yields a possible or potential price target of around $134.

Bottom line: SNA is pointed down but we could see prices hold in the lower $150s. We don't have any strong signs of a bottom or reversal so traders should be patient and keep their powder dry.

Get an email alert each time I write an article for Real Money. Click the "+Follow" next to my byline to this article.
TAGS: Investing | U.S. Equity | Industrials | Technology