This is what stands out. President Donald Trump of the United States, and North Korean leader Kim Jong-Un met last night in Singapore. Both men appeared with a backdrop brilliant in the red, white and blue colors illustrated by the flags of both nations. The men agreed to commit their nations to build a lasting and stable peace. North Korea committed to work toward complete de-nuclearization. The nations also agreed to the recovery and repatriation of POW/MIA remains from the war that took place on the Korean peninsula more than 65 years ago.

I mentioned in Monday's column the peace dividend that had been building in equity markets over several weeks. That said, this news could be met with a lackluster market response, or even some profit-taking as in "buy the rumor, sell the news."

There is for sure, a lack of detail in the document that both men signed. Is that alarming? Not at all. Let me explain. Anyone who understands negotiation, also understands that both sides have to be able to explain to their side the benefits of what has been agreed to.

The most important part of the document for planet Earth is the re-affirmation of the Panmunjom Declaration. It is there that North Korea agreed to work toward de-nuclearization. It is this bullet-point that now forces a time-table to be worked out, and ultimately a process for verification to be agreed upon. This will take more meetings, and potentially many months.

Today. most likely we'll hear a ruling on the Justice Department's anti-trust case against the proposed merger of AT&T (T) , and Time Warner (TWX) . This outcome will have obvious implications for Action Alerts PLUS holding Comcast (CMCSA) , Twenty-First Century Fox (FOXA) , and the Walt Disney Company (DIS) .

Market participants still have the FOMC policy decision to get through Wednesday afternoon. Futures markets trading in Chicago are now pricing a 94% probability of a rate hike at that time, but only a 46% chance that there will be a fourth 2018 rate increase in December. The economic projections, and the press conference will impact markets more so than the expected change in immediate policy. That will be followed by decisions as well as statements by both the European Central Bank and the Bank of Japan as the week plays out. Domestically, Americans will grapple with some high-profile macro-economic data points.

Let's not forget soccer. Soccer? Of course. The World Cup "kicks off" on Thursday in Russia with the host nation squaring off with Saudi Arabia. The expectation is that Crown Prince Mohammed bin Salman will observe the match with Russian President Vladimir Putin. OPEC meets in Vienna just eight days later. Soccer may not be the only game played out this week in Moscow.

How do the events of this night impact the importance of defense stocks in one's portfolio? I can only answer that question from my point of view. Obviously, one might expect some movement away from safe-haven assets Tuesday morning. Then again, these moves will not overwhelm as dollar valuations are high, and there are many other factors at play here. Throw in markets that are still focused in many directions.

As for the defense stocks in my portfolio, while there is virtually no threat of any hostility involving the two Koreas in the immediate future, the development of what has been agreed to in general will continue to present a headline risk.

Defense budgets continue to grow around the planet -- $716 billion defense authorization bill in the U.S. alone; China with its "One Road" plans. What does that mean? Simply put, China continues on the path toward regional dominance, both economically and militarily.

Something close to 50% of the world's trade moves through the Bay of Bengal, the Gulf of Thailand, the South China Sea and nearby waters. This is clearly China's neighborhood. Therefore, in order to protect and defend American interests abroad, there will be a continued need to spend on high-tech aviation, naval, and amphibious capabilities.

If you follow me, then you know that I have long been a fan of Raytheon (RTN) and Northrop Grumman (NOC) . My absolute favorite had been Raytheon, but of late that has morphed into Northrop, largely due to the approval of the firm's acquisition of Orbital ATK, as well as the firm's subsequently increased guidance.

Don't get me wrong. I still like Raytheon. I still like the Patriot missile. I still like the potential for "drone swarm Technology." I believe that to judge the major defense names, one must consider the entire time frame since the election of this president, as he has been a friend to the industry. 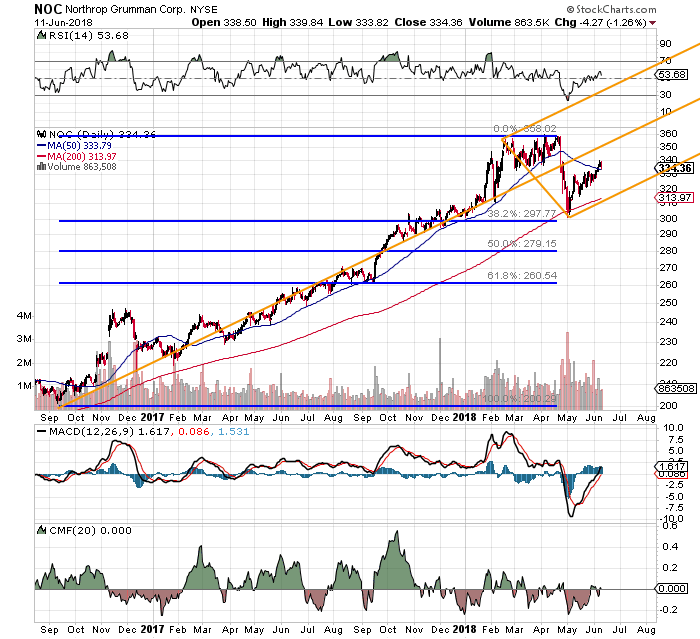 In the chart above, one quickly sees the sudden improvement of late for NOC in the condition of the daily Moving Average Convergence Divergence (MACD), Relative Strength, and Money Flow. Fibonacci support showed up in early May precisely where it was supposed to, suggesting algorithmic control at the point of sale.

What I see is the convergence of a return to the April highs, and the central line of the Pitchfork just under the $360 level. I do not think that I am willing to experience another decline like the one we did see in early May, therefore I will increase my panic point to the 200-day simple moving average line from the $280 level where it was.

Before you ask, I am hanging onto my Lockheed Martin (LMT) position, I am hanging on to my Kratos Defense & Security (KTOS) holdings based on the potential for the drone swarm, and I have become somewhat less enamored with General Dynamics (GD) .

(Raytheon and Lockheed Martin are holdings in Action Alerts PLUS.)

Optional: The July 20 NOC 310 puts went out at $1.38 last night. If on weakness, we see that price approach $2 today, my thought is that at this point, these become attractive for a sale.

Get an email alert each time I write an article for Real Money. Click the "+Follow" next to my byline to this article.
TAGS: Investing | U.S. Equity | Transportation | China | Markets | How-to | Newsletter | Politics | Stocks