This commentary originally appeared on Real Money Pro at 11:30 a.m. on June 12. Click here to learn about this dynamic market information service for active traders.

Traditional "value" investing used to mean buying near the bottom of a stock's yearly price range and when its price/earnings multiple was depressed. It often also went along with collecting a nice yield.

"Growth" investors were more focused on rapidly rising sales and profits. They were usually willing to pay above-average multiples while chasing shares at or near the top of their recent annual peaks.

Neither technique is always best. There are occasional periods when both do well, or badly. However, traders most of the time seem focused on one style to the detriment of the other. The graph below illustrates the mood swings in place from near the top of 2000's Internet/tech bubble through last Friday, June 9. 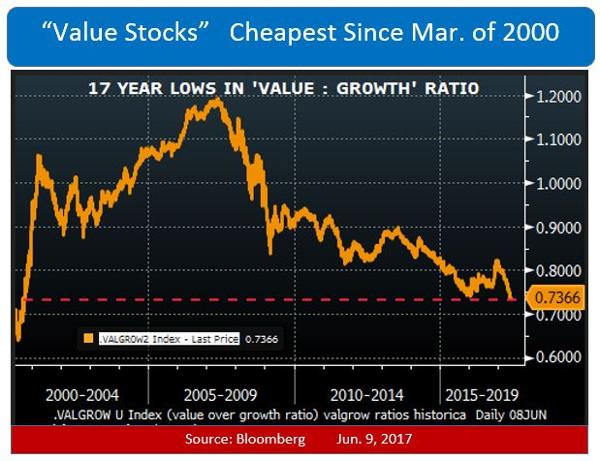 Tech stocks imploded after March 2000, triggering around a seven-year pivot toward more mundane issues. Lots of money was made in value-priced stocks even as technology shares were contracting.

Last week saw the value/growth relationship fall to near its lowest level in 17 years. Contrarian thinkers with reasonable time horizons should take it as a signal to be shunning high-fliers and loading up on out-of-favor names.

The FANG stocks -- Facebook (FB) , Amazon (AMZN) , Netflix (NFLX) and Alphabet (GOOGL) -- epitomized the recent action. Since March 2015 they were up huge while non-FANG stocks took a 15-month round trip to nowhere. 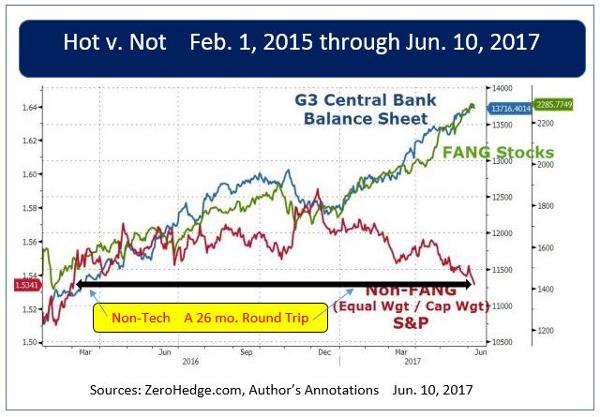 Momentum chasers near the start of 2000 paid dearly by ignoring valuations. This week's Barron's featured an article reminiscent of that era. Columnist Johanna Bennett highlighted five stocks related to cloud computing to buy under the title "Value Hunting."

The prices shown were as of Thursday, June 8. 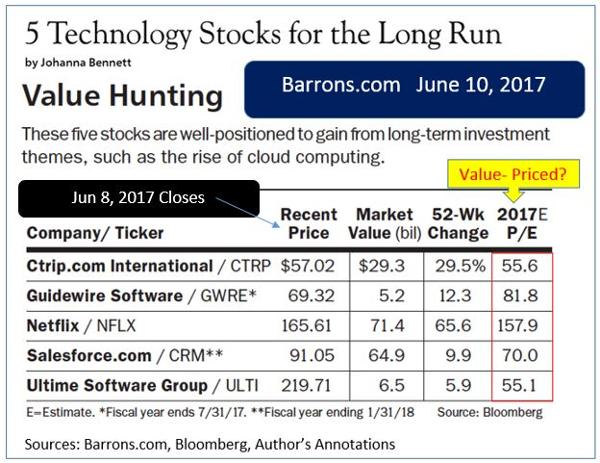 I'm guessing Ms. Bennett is too young to have been investing at the top of the previous tech bubble. Calling stocks at P/Es ranging from 55x to 158x "values" seems pretty scary to me. She referred to these high-multiple stocks as "under-the-radar" gems.

I'm not sure how you could say that about any of them. That's especially true of Ctrip.com (CTRP) and Netflix after 52-week gains of 29.5% and 65.6%, respectively.

By the time Barron's readers were seeing the article on June 10, all five stocks had suffered one-day plunges averaging more than 4%. 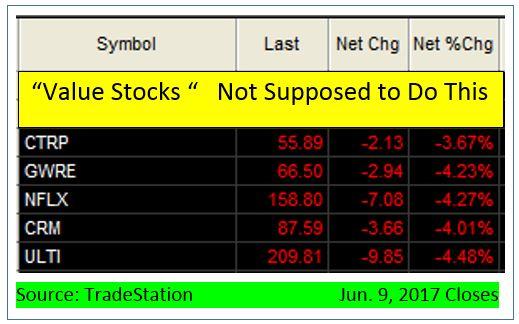 Last Friday was a great day to own the non-tech stocks, which had been down the most for the year to date. This kind of action often is seen near critical turning points. 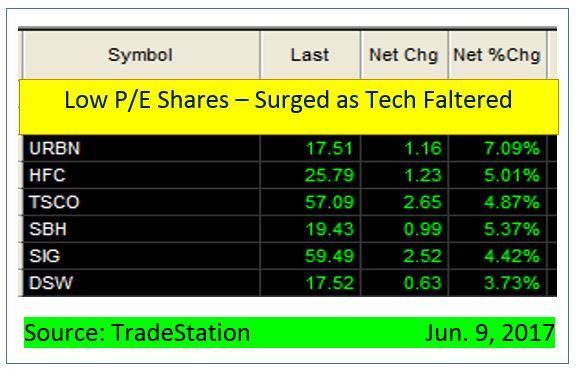 Knowing which industry groups have gone up the most or declined by a lot over the last month or two can be very valuable. Looking backward, here were the best and worst groups as of the end of May. 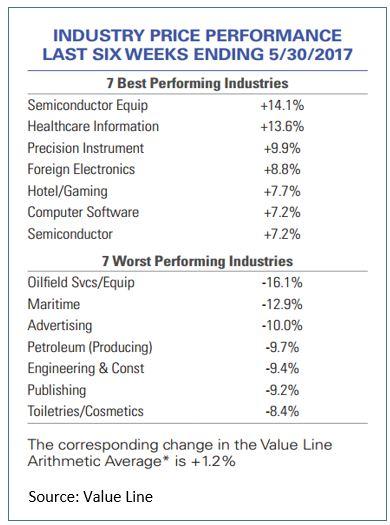 I like to use the worst-performing list to start screening for names and sectors that may have been irrationally beaten up. Combine due diligence on fundamentals with a list of heavy insider buying and you have a very good shot at some attractive gains.

It appears to be time for value stocks to shine again. The trend reversal is likely to last for years, rather than weeks or months.

Facebook and Google is a holding in Jim Cramer's Action Alerts PLUS Charitable Trust Portfolio. Want to be alerted before Cramer buys or sells FB and GOOGL? Learn more now

Get an email alert each time I write an article for Real Money. Click the "+Follow" next to my byline to this article.
TAGS: Investing | U.S. Equity | Technology | How-to | Markets | Stocks

Jim Cramer: These Companies Are Here to Thrive, Now and Post-Pandemic

And here's how they can do it, too: with lots of ingenuity and some good luck.