Abbott Laboratories (ABT) broke out above resistance around $46 in the past two weeks. The stock closed strong on Friday, when some saw that the "sky is falling" in the over-owned tech sector.

Let's drill down in the charts and indicators to see if ABT can plot its own course higher or be caught up in the sell-off.

The daily On-Balance-Volume (OBV) line moved up with the price action from early December and again from mid-April. The OBV line has made a new high along with the price action and tells us that the rally has good and growing support and that buyers have been aggressive. The lower panel is the momentum study, which does not show any bearish divergences to indicate that the rally is slowing.

In this weekly chart of ABT, above, we can see that prices also stalled around $46 back in 2015. Now prices are above $46 and above the rising 40-week moving average line. The weekly OBV line is positive and the weekly Moving Average Convergence Divergence (MACD) oscillator is turning up to a fresh outright go long signal. 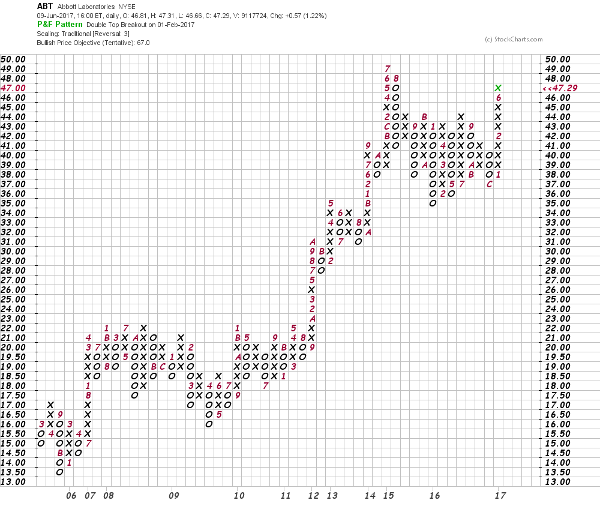 In this Point and Figure chart, above, we can see a breakout at $45 on this chart. $50 will be another breakout. Support starts at $44 and we see a potential price target of $67.

Bottom line: because of general market weakness, ABT might pull back into the $47-$46 area for a while, but barring a close below $46 we are likely to see ABT remain firm and work higher. Longs or new buyers should risk below $43 for now.

These charts are not pretty.