Think G-7 was a circus? That was mere child's play.

Even as President Donald Trump prepares in Singapore to meet North Korean leader Kim Jong-Un, The Donald was on Twitter overnight complaining about Canada's sky-high tariffs on U.S. dairy products. He also complained about much of Europe's reluctance to contribute proportionately to its own defense while enjoying a large trade surplus with America. Then, he tweeted: "Sorry, we cannot let our friends, or enemies, take advantage of us on trade anymore. We must put the American worker first!"

The truth is that the global trade situation has been unfair to the United States for many years, but no nation is going to surrender its advantages on these matters all that easily. So, this will go on for a while.

The point is that as one event passes, another will begin. So, Trump will clearly be pulled in more than one direction -- as you, the investor, will also be.

Market participants will sort of catch a break on Monday, as there's very little in the way of U.S. economic data coming out. And as economic reports start to flow in later this week, at least quarterly earnings releases will be light (with the notable exception of Adobe (ADBE) on Thursday evening).

Anybody out there remember the old (pre-night vision) nighttime booby-trap course at Camp Lejeune? The chaos ahead for markets this week might be akin to that. Things that we'll face will include:

How should we trade such a week? The truth is that for the most part, you'd be crazy to try to trade the newsflow on a week such as this. These events will create both opportunity and hazard, but high-speed algorithms will be much quicker than any human trader could ever hope to be.

So, the best way to handle this is to know ahead of time which stocks you like and which you don't. Then, know where you like them and where you don't. You don't win this game without a plan, gang.

I believe that in all likelihood, there are three industry groups that could see a significant reaction to this week's events:

Given the right opportunity, I look to add to (or take profits from) two names that could be impacted by this week's newsflow.

First up is Goldman Sachs. Goldman is my least successful position in the financial space and one of the worst on my entire book not related to a hedge of some kind. I'm down 1.9% on the name.

However, the stock has recently shown some signs of life, breaking out of a horrendously downward sloping pitchfork pattern so far in June: 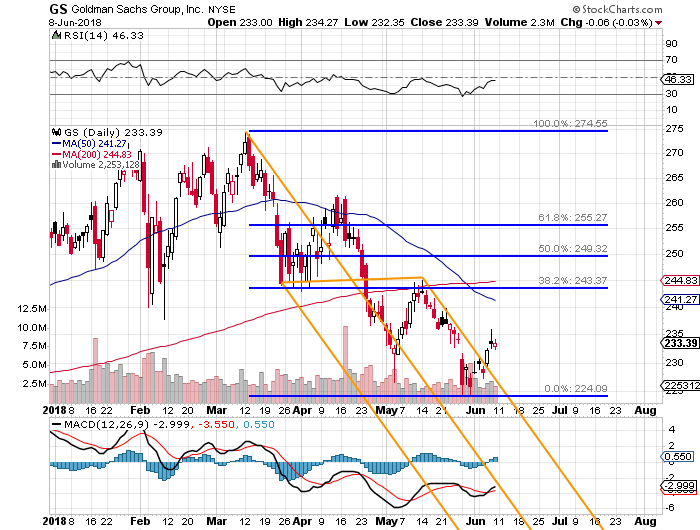 Not only is this stock likely to benefit from a rising-interest-rate environment and a more volatile trading arena, but this is a stress-test story as well.

Goldman sold off as the firm decided over the past quarter to invest in places other than its own shares, but should Goldman come out of the upcoming CCAR stress tests in position to return more capital to shareholders, its chart should change significantly ... for the better. So, here's my recommended trade:

Ubisoft is seeing a seemingly sustainable condition, as this chart shows: 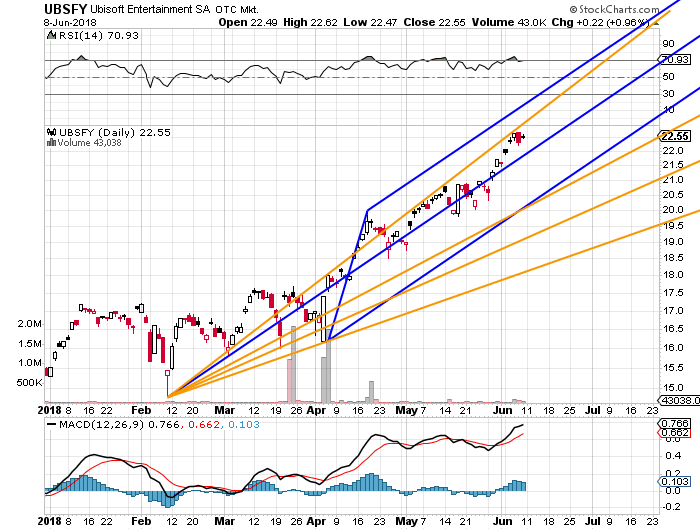 You can see that the name remains on trend and has been so for multiple years now. You can also see where both the pitchfork model's lower trendline and the first line of Fibonacci Fan support run side by side for about a week in mid-June.

I intend to add to my UBSFY position on any selloff related to the E3 event, even though that'd be well above my current net basis for the name. My recommended trade: