Risk-off? At least that's what traders around the globe seem to be thinking in early Friday morning trade. We have been expounding on the potential for some profit taking after what has been a nice run ahead of the G-7 meetings up north and ahead of next week's summit between President Trump and North Korean leader Kim Jong Un in Singapore. Here we are.

News came that President Trump planned to leave Canada on Saturday morning for Asia. The president had always planned to leave the G-7 meetings by lunch, and is really only skipping out on what were planned meetings on climate change and a photo session, but the media immediately took the early departure as a negative, as did the marketplace. The truth is that if any investor/trader came into week's end unprepared for some headline risk, then this sport probably is not that trader's cup of tea.

On Thursday, President Macron of France was plainspoken "The six countries of the G-7 without the United States are a bigger market taken together than the American market." Canadian Prime Minister Trudeau has also been making noise as this "get together" approaches. In all honesty, one can not blame these gentlemen. They are defending the interests of those whom they have been elected to represent. The truth is that in many cases these and other nations have already been placing tariffs on US exports far larger than what the US does to imports from these nations. They threaten retaliation. Could not President Trump's actions not truly be referred to as retaliatory?

The US president has also been elected to represent his people, and is obviously trying to do so. Like him or not, and I do see your reasons for both, the man is doing exactly what he said he would do, and was elected to do. Much of the world has had their way with the US for so long, if a better trade condition results from the rattling of a few cages, perhaps this effort will be well worth it. Only the passage of time will clue us in as to the results of the president's efforts. I will be slow to judge, as a fairer playing field is obviously desirable in the end.

Charge of the Retailers (Managing Gains That Came Very Quickly)

Redoubt number 10 is mostly gone now, in the process of being claimed by the James River. It was there, at Yorktown, Virginia that a very long time ago, a young Lt. Colonel by the name of Alexander Hamilton led his famous bayonet charge against British fortifications. Last night, the Federal Reserve Bank, whose origins can loosely be traced back to Hamilton, released their April data on consumer credit. For revolving credit....not very impressive. A soft increase of $2.3B was seen in that space, which was actually an improvement from March's decline of $2.6B.

Fortunately for our nation's retailers, the late March into early April period now appears to be a shrinking image in the rear view mirror as the group aggressively charges ahead into technically overbought territory here in early June. What changed for this group? You might recall that just Wednesday, that I increased my target prices for both Macy's (M) and Kohl's (KSS) right here in this column. Amazingly, both of these names have already approached those new targets. Fortunately, I am indeed long both of these names. I have taken some profits in KSS over the past two days on basic principal, but have left Macy's untouched as it is the smaller position of the two.

Earlier this week, JP Morgan (JPM) increased their target price for the stock to 41. My "new" target is 42. The stock did trade above 41 on Thursday but failed to reach my target. My thesis for the name had a lot to do with short interest, which until recently represented 23% of the float. No telling where that level stands this morning as there has obviously been a squeeze in effect not just for Macy's but across much of the brick and mortar retail space. Just in case some of you are playing this game with me, I am going to tell you, and show you just what I am going to do. 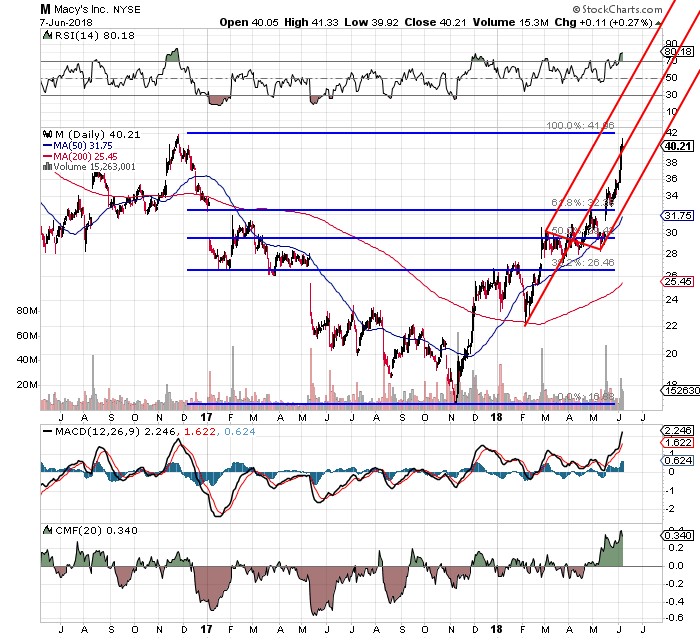 Look familiar? It should. I showed you this chart just 48 hours ago. See that poke above the Pitchfork's central trend line. A break of that line on this morning's equity market weakness forces me to take 30% off of this position just to protect these gains that came so quickly. See the lower bound of the same Pitchfork. It's not so hard to imagine a return to the 34 level within two week's time. Should that happen, my plan would be to buy back the portion that I sell today. However, we don't know if portfolio managers are done chasing this space, and we don't know who still needs to cover their shorts. If I see any sign of support at 40, I am not selling a share.

(Kohl's and JP Morgan are holdings in Jim Cramer's Action Alerts PLUS member club. Want to be alerted before Jim Cramer buys or sells KSS or JPM? Learn more now.)

Won't You Please Take a Pass on the Jelly?

So... where do you catch a falling knife? Do you even want to try? JM Smucker (SJM) closed at $100.80 last night, down a brutal 5.4% on the day. In fact, the shares are off nearly 24% since just mid-March. Staggering. In the name of relentlessly pursuing potential profit... SJM, you now have my attention. So, what gives? Simply put, the firm posted an awful fourth quarter.

Prior to Thursday's opening bell at 11 Wall Street, SJM put quarterly EPS of $1.93 to the tape, missing expectations by a quarter of a dollar. Revenue, which also fell short of projections was flat year over year. Flat...as in growth of zero point zero percent. Have you ever held a job where you occasionally had to mop up things like spilled jelly, or shortening? I have. Gross.

Where Are The Trouble Spots?

Well, everywhere. Coffee was flat. Pet Foods were flat. US Consumer Foods were negative. We were not expecting miracles. We know it's been tough for the food companies. We know it's been tough for the Staples in general. We know uncertain trade outcomes can weigh on stocks like this, but obviously... we were not expecting this. Is there good news? Both Pablo Zuniac of Susquehanna (PT of $159) and Akshay Jagdale of Jefferies (PT of $135) have come out and maintained "buy" ratings on the stock. Both analysts in their notes acknowledge below expected profitability in the coffee space. Higher interest costs associated with the acquisition of Ainsworth Pet Nutrition also seems to be a theme. Due to this, and increased costs for transport, operating margins though higher year over year, also seem to have hit the tape below what investors were looking for. 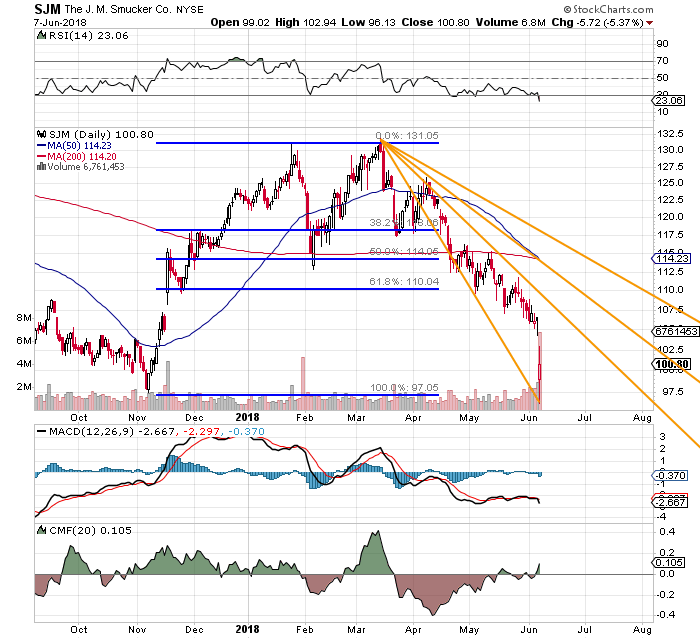 The name appears to be poised for what is known as a "death cross" with only three cents left between the 50 and 200 day simple moving averages. To me that means that some more technical selling could pile into this name before it gets better. That same obvious break really came when the 110 level snapped in late May, and should there be any rally in the name, I see the potential for resistance building not just there, but also on a declining first fan line that allows room for possibly a short-term trader to profit, but not much in the way for an investor. Before committing capital, my thought is to see where the name is trading next Tuesday or Wednesday when I revisit. I do not, even at this price, find SJM attractive.

As of last night, you could still sell October 85 puts for $1.20. That might be an interesting entry. I won't be making that sale just yet, keeping in mind that I have enough on my plate, and this stock sports more than a $35 range over the past three months. Pass the jelly? More like take a pass on the jelly. Sarge out.

Get an email alert each time I write an article for Real Money. Click the "+Follow" next to my byline to this article.
TAGS: Investing | U.S. Equity | Consumer Discretionary | Markets | Economy | Politics | Stocks