Not exactly the same as being the first to run a four-minute mile, but the Dow Jones Industrial Average closed Wednesday at nearly three-month highs. The Nasdaq Composite did put a record close to the tape -- for the third consecutive day. Hmm. Do investors anticipate a favorable outcome on trade? Or a serious resolution regarding the imposition of tariffs on allies, and frenemies alike?

Tech leads the way, it seems. Yes, the information technology sector leads over a month, year to date, and on any lengthy time line as well. Even this week, tech has been strong. Broader markets go nowhere without the financials, and without tech, yet broader markets certainly seem to be going somewhere.

Did you see the Bureau of Economic Analysis' (BEA) significantly improved Trade Balance for April, as well as the positive revision to the March data? True, cell-phone imports made up more than 75% of the decline in the Consumer Goods deficit, so the improvement seen in the headline print, while real, was centric to one slice of the data.

On to the G-7, we push. You can bet that the focus of this weekend's meetings will be the United States' decision to impose tariffs on steel and aluminum on the other nations present.

Is there headline risk associated with these meetings? Simply put... yes. While markets do seem to have become more comfortable with the ongoing idea of trade disputes, there seems to be an underlying tone that in the end, favorable outcomes will be reached.

The possibility of negative headlines coming out of a G-7 meeting where several leaders are likely to be offended by a U.S. leader that aggressively defends domestic priorities would, I think, be increased. Maybe some risk-off ahead of the weekend.

Though I will trade in and out, like the market itself, as a man held responsible for the performance of his P&L I am almost always more exposed to information technology than I am to any other sector.

I think this seems obvious. This is a demand story. Big data. Machine learning. The data center. The what? Cloud computing, gang. It's still in its infancy, particularly from a global perspective. So much data is now being created by so many gadgets. It all has to go somewhere. It all has to be compartmentalized, analyzed, and then drive the ability to make decisions, which leads to both the internet of things and ultimately artificial intelligence. Perhaps humankind's last great invention.

Laugh if you want. Talk to your family and friends. As machines take on more and more, people you know are placing less and less demands upon their own intellect. You can't stop this. There are two things that you can do about it.

1) Don't be that person. Get on a treadmill? Read a book. Figure out something difficult.

2) Invest in where we seem to be going. That means software (cloud computing), and semiconductors in the medium to long term.

Not all semiconductor firms are valued equally. Some are walking point on the data center, on autonomous driving, on blockchain technology. Some ride the wave with memory, and some do cellphones, as if telecommunications were not so worthy of our attention.

Year to date, the Nasdaq Composite is now up more than 11%. Micron Technology (MU) has run 44%, and Action Alerts PLUS holding Nvidia (NVDA) some 37% over that time. Compare those numbers to the Philadelphia Semiconductor Index in Philadelphia (+14%), and to Qualcomm (QCOM) . QCOM is down around 7% this year. Down? Yes, down.

I am flat QCOM. This is my actual homework. By the end of this article, I (we) will make a decision, and perhaps act upon it.

Former CEO Paul Jacobs has been clear. He has stated that he is starting his own 5G company even while pursuing continued efforts to take QCOM private. There. I have told you why not to get long this stock. Now, let's flip this coin.

Qualcomm is behind most of the chips used by most cell phones. Qualcomm and Apple (AAPL) have a legal beef between them regarding the licensing of chips being used in Apple's phones and tablets. Then there's the not-quite-clinched effort to acquire NXP Semiconductor (NXPI) that comes in the wake of the now-failed attempt made by Broadcom (AVGO) to acquire Qualcomm. Complexity. Awesome. NXPI was a good trade for us, by the way.

Think the trade situation with China reaches a favorable outcome? Think the rhetoric continues to mellow? (They do want to buy $70 billion worth of stuff just to make nice.) If you think a deal is close that permits Chinese communications behemoth ZTE to save its business, then it also becomes likely that the QCOM / NXPI deal happens.

Bet you knew that Qualcomm has a dividend yield of 4.1%. Bet you did not know just how strong the firm's balance sheet is. The debt-to-capital ratio is just 0.49. The quick ratio is an amazingly strong 3.4. Read that again, friends: 3.4. That means these guys can deal with a lot of pain before they're in trouble should a crisis arise.

Oh, there's a future too. Ever hear of Snapdragon 5G? You will, as 5G communications become normal, and thus faster. Did you hear current CEO Steven Mollenkopf last night with Jim Cramer on Mad Money? Backlog of $4 billion alone in the automotive space. You also heard the man say that there is a clear path to earnings in a range of $6.75 to $7.50 per share for 2019. If that happens, or if anything even close to that happens, then guess what? This stock is dirt cheap, friends. Don't trust the guidance? Fine.

1) I have already told you about the 4.1% dividend yield.

2) On top of that, on May 9, the firm announced a new $10 billion stock repurchase program, effective immediately that replaced the old plan. That plan had room left of just $1.2 billion, so this is an $8.8 billion increase. How significant is this? Let me put it to you this way. Qualcomm's market cap is $89 billion. Huzzah.

3) Think they can't hack it? Did I not already mention the $39.5 billion in cash and equivalents in hand as well as the strength of the balance sheet. 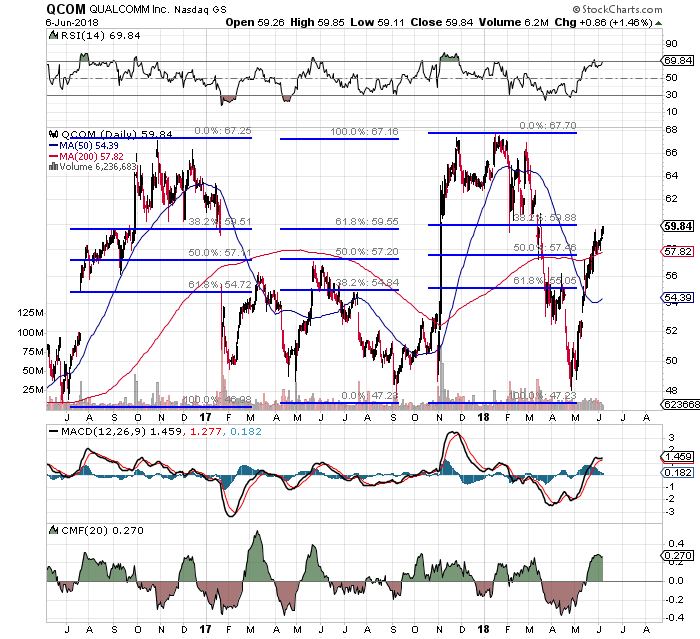 A two-year chart of QCOM displays an incredible sideways range over that time frame just littered with repetitive 100% re-tracements. Did we miss the bottom? I am afraid so. Can this name bring home a few clams for the bold? I sure think so. There has been some support above $52 in the past, with the obvious level down around $48. It does not take a genius to see that to the upside, the $68 level will be an obstacle. Quarterly earnings are due on Wednesday, July 25 after the closing bell.

-Purchase 12.5% of intended long position (in dollar terms, not share size) right here (last $59.84) with the intent to add in equal increments should there be negative trade news, or negative headlines regarding the firm's fight with Apple.

A) By making these sales, a trader would be exposed to buying 300 shares in the event of a collapse in the price of QCOM shares. In the event that the shares rise over this time frame, the same trader has decreased his or her net basis assuming a long position of 100 shares by $2.15.

B) Should the shares collapse, and the trader be forced to eat all of the equity committed to by selling these contracts, that trader (if starting out with a purchase of 100 shares) would end up long 400 shares with a net basis of $51.30 plus commissions paid. In my opinion, not bad. Also in my opinion, this is how portfolio building is done while raising revenue in the meantime.

Get an email alert each time I write an article for Real Money. Click the "+Follow" next to my byline to this article.
TAGS: Investing | U.S. Equity | Technology | How-to | Options

The charts of the big chipmaker are sending largely bearish signals.