We wake up every day in the middle of the night. We work from well before sun up until well past sun down. There are few TV shows that we have ever heard of. Famous people? Don't care. We wade into the economy every day, trying to carve out a living. No guarantees. Others toil away working for others. We rely on our creativity, our cunning, and a bit of luck. If we fail to kill, then we fail to eat. For traders, it really is that simple. Still, we are a very long way from tough. Once upon a time, there were giants roaming the earth.

Overlord. Seventy-four years ago today, 06:30 in the morning, 156 thousand American, British, and Canadian soldiers... primarily infantry, landed at five beaches along a 50 mile stretch of the French coastline. The heaviest resistance was met at Omaha Beach. The US Army would take more than 2,000 casualties on that beach on June 6th alone. In all... 9,300 Americans would never leave Omaha Beach. Within five days. 326k allied troops, 50k vehicles. and 100k tons of equipment had landed at those five beaches. A second front in the Europe theater had been established through tremendous personal sacrifice. By the following May, much further east... Nazi Germany would surrender to allied forces.

Why You Need To Learn Your Stuff

No Soup For You

This year, for the first time since 1982, Social Security will have to tap into it's own $3T trust fund in order to meet the program's obligations. This was indeed expected to happen... three years from now. The annual report released on Tuesday afternoon by the trustees of Social Security and Medicare shows that without action being taken by the US Congress to improve this situation, that Social Security will be unable to pay full benefits to people who have paid into the program by the year 2034. Medicare's hospital insurance fund will likely be depleted by 2026... that's eight years, gang.

Know someone on disability? Yeah, that money runs out in 2032. All of these obligations are paid through tax revenue and interest earned by the trust fund. What is working against us? Demographics for one. The population is aging. Retired workers are living longer, and labor force participation has dwindled over the years. Tax cuts, while generating economic growth, are slowing the income side of the ledger for programs such as these. Why worry? They'll think of something. Right? Maybe if I close my eyes, these problems will go away.

Unless US economic growth actually hits some unquantifiable level once vaguely referred to as "breakaway speed" we will be left with only two choices. Either we, as a people will be forced to harm the retired and disabled or we will have to harm the labor force. Some choice. Maybe folks need to learn how to play this sport. (Yes, that means working your tail off.) Depend on yourself. Carry those you love on your back. In the end, you ARE the only one you can count on. That choice is easy... Fix Bayonets.

Global Uncertainty. European Central Bank chief economist Peter Praet spoke of next week's ECB policy meeting. You've seen the gut wrenching moves in Italy and Spain over the last week. You've seen European datapoints such as manufacturing surveys, retail sales and industrial production all print at disappointing levels in recent weeks as well. Yet, inflation across the Euro Zone does seem to be gaining momentum. Potentially, the pace of growth slows, while inflation heats up. We used to have a word for that.

The point is that Praet said, "It's clear that next week the Governing Council will have to make this assessment, the assessment on whether the progress so far has been sufficient to warrant a gradual unwinding of our net asset purchases." For those a little dense, the policy meeting next week is live and will impact global markets as the ECB attempts to plan it's exit from the existing quantitative easing program. That program is set to keep buying roughly $35B of assets per month on into September. The expectation in place is that the program would then taper down to zero over a number of months.

The punch-bowl dries? Rising rates become a headwind for equities? Perhaps. Initially... it would seem so. Yet, if the ECB (and other central banks) fall in line with the Fed going forward due to inflationary concerns, then value held in cash would not be a viable alternative. Fortunate ones would hold hard assets such as real estate, works of art, and physical gold. Equities however are convenient, and despite the apparent headwind, might see some benefit from funds fleeing debt securities until yields themselves reach levels that attract those funds back into the space. Complex? What isn't? You can do this.

Yes, I would love to address China's offer to buy $70B worth of US products in order to avoid the president's planned tariffs. I would also love to address the fact that in April for the first time this millennium (when we started keeping track) that job openings in the US on a seasonally adjusted basis actually outnumbered available participants. I would have also liked to have written about Nasdaq's tech dependent record close. These topics will be covered up, down and sideways across the financial media today.

If you follow me closely, then you know that we had two retailers simply blow right through our upside price targets this week. Our personal discipline demands that we address this. First let's look at Macy's (M) . Our price target had been $38. The shares closed last night at $40.05, and will likely face some profit taking this morning. 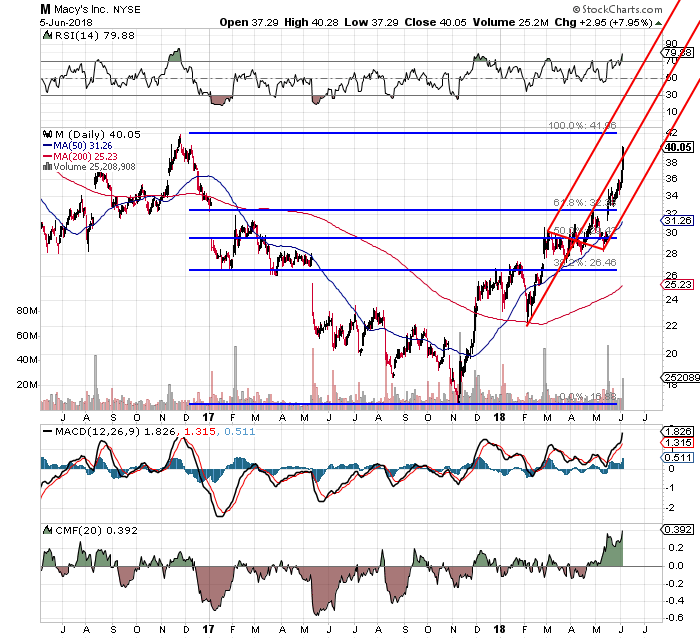 Some Pitchfork. Relentless. Thinking about taking a profit? I am too. One thing slows me down. The shares go ex-dividend on June 14th, payable July 2nd. Oh, another thing in addition to the recent plethora of kind words coming from analysts... I don't know how many shorts covered yesterday, but my data shows 23% of the entire float being held in short positions. That's some serious depth on the bid side, kids. 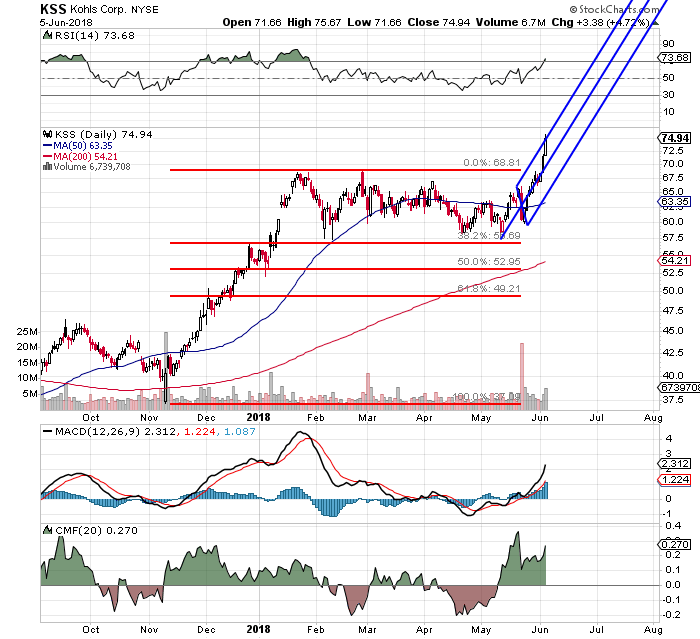 I took a small profit yesterday in Kohl's (KSS) . I mean, my price target was $68, and discipline demanded that I do something 10% above target!! You can easily see the breakout above old highs for this one. Buy zone? No kidding. However, to be realistic, the developing Pitchfork is unsustainable. Again here, 19% of this float was held short, and I have no idea how much of yesterday's action was related to a squeeze. Don't forget that KSS cooperates well with Amazon (AMZN) . That's important.

What's plain to see is that both of these names, and much of the retail space, are now technically overbought. What investors must understand is that the industry was left for dead, and mangers woke up one day realizing that they had left themselves unexposed (or under exposed) to a sub-sector sporting 40% to 60% gains on the year. Doh !! Yes,kids, the chase was on, and modern investment methods of passive investment exacerbate every move. If KSS runs further before stopping for air, I will sell another 20% of my stake in here.

New Target Price: $80 up from $68 (This will likely change again when I see where resistance lives)

Get an email alert each time I write an article for Real Money. Click the "+Follow" next to my byline to this article.
TAGS: Investing | U.S. Equity | Consumer Discretionary | E-Commerce | Options | Stocks