When we reviewed Kohl's Corp. (KSS)  just a few days ago, we noted that, "KSS looks like it wants to break out to the upside to continue the advance but just in case there is a downside reversal I suggest raising stop protection to just below $60 now."

Now that KSS has broken out above the January and February highs we need to review the charts for targets and stop loss levels.

In the updated daily bar chart, below, we can see how Action Alerts PLUS holding KSS broke out on the upside from its five-month consolidation pattern. Prices are now firmly above the rising 50-day moving average line. The slope of the 200-day line is also positive. The volume of trading did not diminish from January to May, which is typical for consolidation pattern.

The daily On-Balance-Volume (OBV) line was pretty steady during the consolidation pattern telling us that traders largely stayed with their positions. Over the past two weeks the OBV line has started to strengthen and it should make a new high soon. The Moving Average Convergence Divergence (MACD) crossed above the zero line in late May generating a new outright buy signal.

In the weekly bar chart of KSS, below, we went back five years to see the 2015 zenith. In this chart we can see that prices are above the rising 40-week moving average line. The price pattern from late 2017 to now looks like a measured move or an A/B move. This longer-term and relatively rare price pattern is a large rally followed by a correction for a number of months followed by another rally of the same length as the first rally. This pattern would measure to $90 on the upside.

The weekly OBV line has been strong and confirms the advance. The weekly MACD oscillator is crossing to the upside for a fresh outright go long signal.

In this Point and Figure chart of KSS, below, we can see an upside price projection of $85.06. 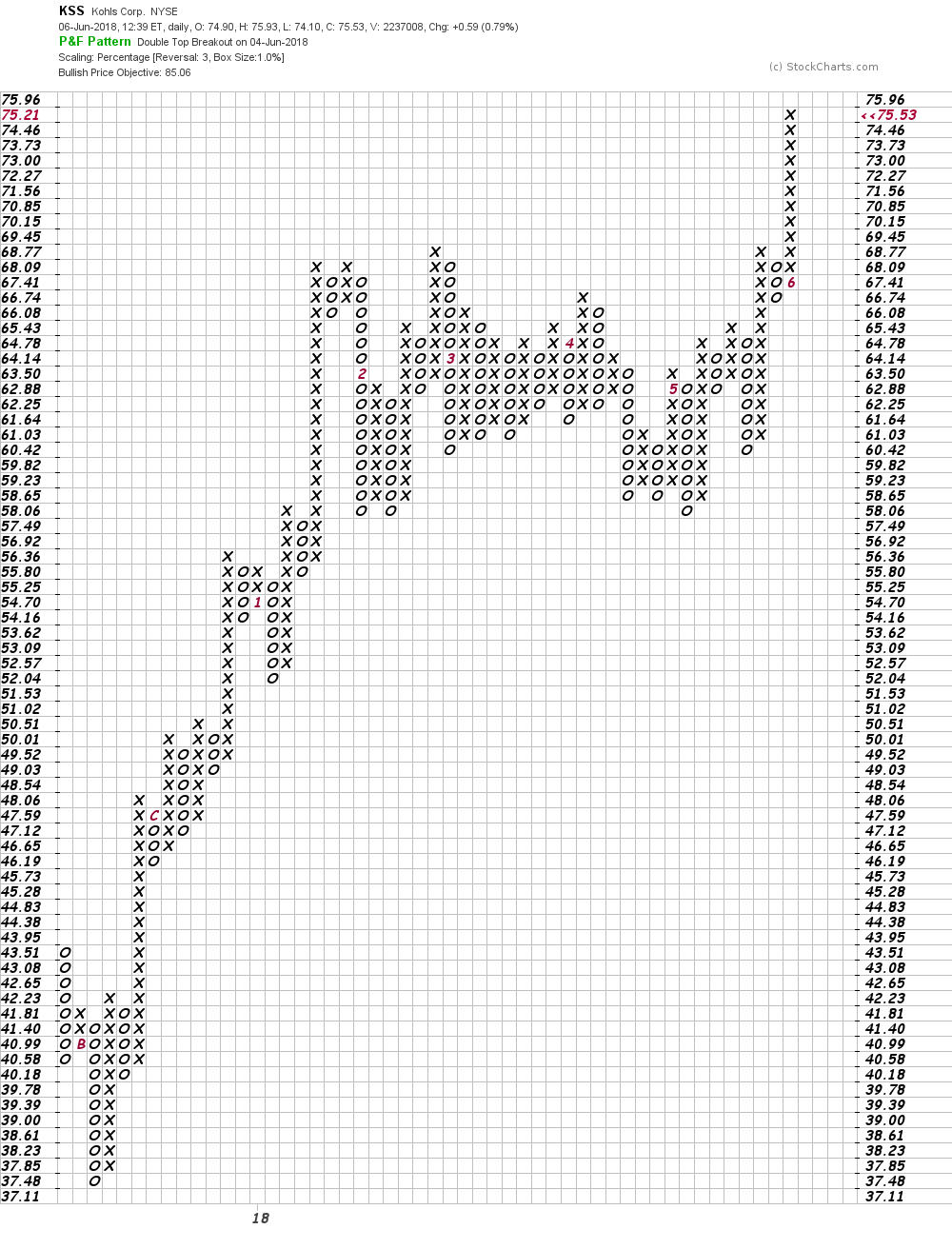 Bottom line: We have upside targets of $85 and $90 for KSS so the burning question is where should we consider buying more and what should we risk now? Traders could try to add to longs on a dip to around $74 if available. Stops could be raised to $66.

Get an email alert each time I write an article for Real Money. Click the "+Follow" next to my byline to this article.
TAGS: Investing | U.S. Equity | Consumer Discretionary | Dividends | How-to | Jim Cramer | Mad Money