Phillips 66  (PSX) was downgraded today by TheStreet's quantitative service, which comes on top of some weakening charts and indicators.

In this daily bar chart of PSX, above, we can see prices peaked in December and lost a lot of ground to an April low. Prices bounced into May but have pulled back down toward the April low. PSX has traded above and below the falling 50-day moving average line. Prices also failed at the underside of the 200-day moving average line last month. The daily On-Balance-Volume (OBV) line has moved up and down with the price action, but oddly is above its October low. The Moving Average Convergence Divergence (MACD) oscillator is in a bearish mode below the zero line.

In this weekly bar chart of PSX, above, we can see prices are below the flat 40-week moving average line. Notice the $75 level on this chart and how many times this level has held in the past two years. The weekly OBV line peaked in December and has moved lower, signaling that sellers have been more aggressive. The weekly MACD oscillator turned bearish in March when it moved below the zero line. 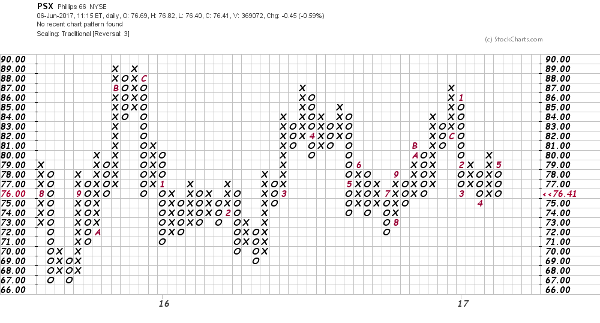 In this Point and Figure chart of PSX, above, we can see $75 is a key level and that a decline to $74 will represent a bearish breakdown.

Bottom line: With the charts and indicators for PSX looking weak, I would avoid the long side.