Citrix Systems (CTXS) has nearly doubled in the past three years, but a shift appears to be underway on the charts. The shift is pointing to a period of consolidation, or even some modest weakness in the weeks ahead.

The shift in CTXS has been evolving in the past few months. Let's dig into the daily and weekly charts to see how the price action is changing.

In this daily chart of CTXS, above, we can see that prices were in an uptrend from November to March, but the trend has turned to neutral or sideways since March. CTXS tested the rising 50-day moving average line four times since early December. Each time until now, the test only lasted a few days. But the last test has gone on for two weeks, and the slope of the 50-day average line has turned flat.

The daily On-Balance-Volume (OBV) line peaked in late April before the May price peak, and the subsequent decline in the OBV line suggests that sellers of CTXS have turned more aggressive.

In the lower panel is the 12-day momentum study, which shows a pattern of lower highs since February, while prices made higher highs. This bearish divergence told us the pace of the advance was slowing and looks to be foreshadowing weaker prices ahead.

In this weekly bar chart of CTXS, above, we can see that prices are still above the rising 40-week moving average line. The weekly OBV line turned up in early 2016, but has moved to a neutral trend in the past four months. The weekly Moving Average Convergence Divergence (MACD) oscillator has crossed, signaling a take profits sell. 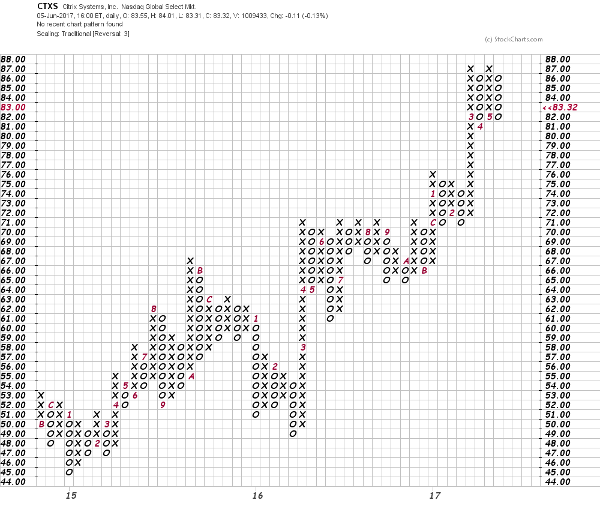 In this Point and Figure chart of CTXS, above, we can see a consolidation pattern playing out since March (the number 3 on the chart). $81 is a support level, but if we saw prices weaken to $80 we could see further weakness to around $76.

Bottom line: unless prices sprint above $88, we are likely to see a period of sideways price action between $80 and $86. Weakness below $80 could precipitate further declines towards next around $74.

Get an email alert each time I write an article for Real Money. Click the "+Follow" next to my byline to this article.
TAGS: Investing | U.S. Equity | Technology | How-to

The Tactical vs. Strategic Approach to Markets, Game on for the Semis