Elon Musk's SpaceX launched a Falcon 9 rocket from Cape Canaveral just after midnight Monday to place a communications satellite owned by a Luxembourg company into orbit. Will SpaceX someday achieve Musk's goal of reaching Mars, or will someone else beat it to the punch? How can investors play this?

Muilenburg rattled off a few data points for such a mission: "38 stories tall ... 9.2 million pounds of thrust ... the biggest rocket ever." Oh, and then there's the small matter of requiring cooperation with NASA. Muilenburg also indicated that test flights would begin next year.

But then Musk saw TheStreet's coverage and tweeted back to Muilenburg: "Do it." Musk has stated in the past that he expects SpaceX to start testing a rocket that would reach Mars some time early next year, and that manned flight to the red planet could come as soon as 2024.

Take Me to Your (Market) Leader, Earthling

Why bother racing to Mars, and why bother investing in the space of space at all?

Well, while there's obviously no mass of potential consumers to reach on the red planet, President Trump has made reaching Mars one of his priorities. And according to The New York Times, the U.S. government's fiscal 2019 budget calls for a $370 million increase in NASA funding.

Now, a more realistic goal based on planned spending would be a return to the Moon rather than a trip to Mars. But either way, are SpaceX and Boeing now rivals in a new space race to Mars? How should investors play this? Let's check it out.

Reasons to Bet on Musk

Monday's SpaceX launch wasn't the only one on the company's schedule, as the firm plans to launch a resupply mission to the International Space Station (ISS) later this month.

Sound like a business? Maybe. SpaceX has successfully produced the first privately funded, liquid-fueled rocket to reach orbit, and revenues could surpass $2 billion this year. The company has also already launched the first non-government spacecraft to reach the ISS.

Reasons to Bet on Boeing

Anyone who follows Tesla (TSLA) , Musk's money-losing electric-vehicle company, can answer this one. After all, Musk has consistently overpromised and then underdelivered on Tesla's production.

That's made TSLA the most-shorted stock that I personally own. The fact that an incredible 33% of the entire float is now sold short is the primary reason I have a long position on the name.

Now, the race to Mars is a cool technological story, but it's demand that drives revenue and revenue that should drive your investment decision-making. But unfortunately, Musk's track record there isn't so great. For example, Tesla currently runs with negative numbers for both operating and levered free-cash flow.

Needham analyst Rajvindra Gill last week initiated TSLA with a "Hold" rating, writing: "We don't foresee Tesla reaching full production until 12 months from now. [And] if the company does manage to hit its production targets, we suspect it will be by sacrificing margins and profitability." Ouch!

On the other hand, Boeing had more than $8.5 billion in levered free-cash flow on a trailing-twelve-month basis. What that means is that BA can more easily afford to spend on research and development than Musk can.

A Better Way to Play This

Now, where is the kind of progress that's needed for space travel often made? Answer: The defense sector.

So overall, I like investing in space travel not via a dangerous world full of bad actors, but via projected global defense spending. Boeing is one name that I've repeatedly missed owning, but my other longs in the defense/space sector have for the most part treated me well.

Is it too late to play Boeing? Let's look at the stock's chart: 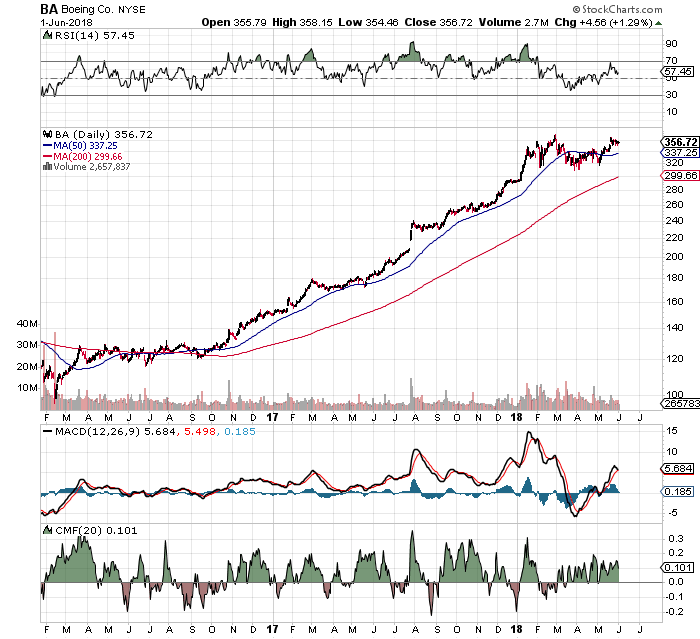 It's difficult to pick a starting point when looking at Boeing's chart. However, the stock did run sideways from late July through mid-September, which is why I chose that price level to begin the following snapshot: 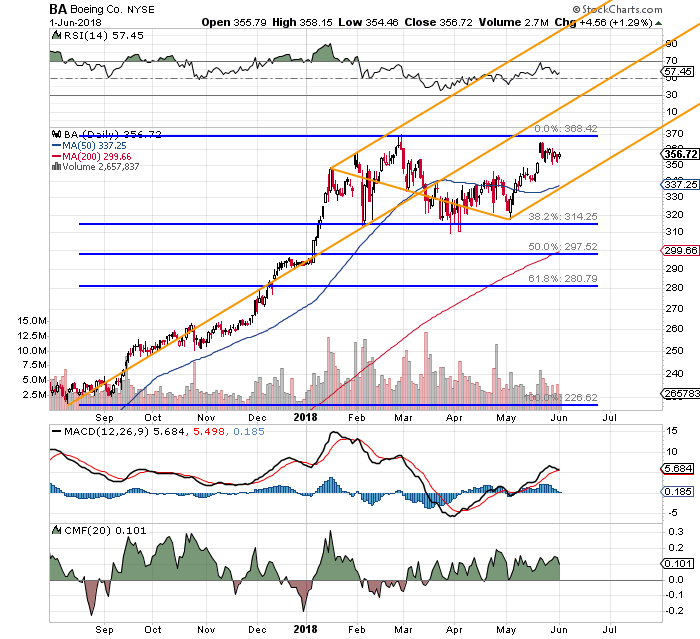 Using this timeline allows us to see how Boeing has stalled somewhat from its incredible ascent. That said, BA did better than its rivals in withstanding an April sell-off that hit the aerospace sector, and also recovered despite ongoing threats of a global trade war.

Still, the $370 level has obviously provided an upside roadblock for Boeing, which closed Friday at $356.72. But based on the model above, any upward breakage of this level could allow BA to get close to $410 within six weeks or so.

This rising potential for pitchfork-provided support appears to be lining up with the stock's 50-day simple moving average, although that line hasn't shown any ability in the semi-recent past to impact Boeing's market price. Instead, true support might be as distant as the already tested $315 level.

But if you're afraid to risk as much capital as investing in a $356 stock would require, here's a so-called "straddle trade" that might work ahead of Boeing's next earnings report (expected before the bell on July 25).

As a reminder, a straddle trade involves the simultaneous purchase of both a call and put on a stock with the same strike price and same expiration date. In this case, you would:

What that does is open you up to some equity risk, but at more than a 10% discount from Friday's close if you're "put" the stock (forced to buy it). This second trade would also reduce your net outlay for your straddle play by two bucks, which in turn narrows the zone for your potential net loss by four bucks.

If you're forced to ultimately pay $320 for Boeing, you already brought in $2 a share from your put, while your straddle would have earned you roughly $16 a share. This means your net basis for Boeing would fall to around $302 a share rather than $320. That's well below the stock's apparent support level on the chart above.

(An earlier version of this column incorrectly put NASA's proposed fiscal 2019 budget increase at $370 billion instead of the correct $370 million.)