Job gains in May were not as strong as the market hoped, coming in at just 138,000 vs. expectations of 182,000. On top of the miss, the prior two months were revised down by a total of 66,000. Does this put a June Fed hike in jeopardy? Here are my thoughts.

Job gains mediocre all around

In terms of the raw hiring numbers, there isn't much to like here. As I said above, the most often quoted nonfarm payrolls missed by 44,000 from survey. If we add in the downside revisions, we are 110,000 total jobs off where we thought we'd be. That's meaningful.

The household survey (which is used to calculate the unemployment rate) was also poor, showing a 233,000 loss of jobs. You shouldn't panic about this as the household survey is notoriously volatile. Last month it printed at 472,000. But even if we look at the six-month rolling average, we're now adding just 146,000/month in new jobs.

These ugly numbers are definitely cause for concern. I wrote on Wednesday that historically slowing job gains are often a sign that the economy is hitting a stall speed, i.e., the economy isn't growing enough to encourage firms to expand. When that happens, they neither hire new workers, nor invest in new physical capital.

The drop off in investment results in a further decline in growth, and suddenly we're in a recession. Specifically, my research suggests that job gains around 160,000 is a threshold to watch. Falling below that suggests we're in the danger zone. Hence, printing at just 138,000 worries me. The six-month rolling average is now just 161,000. Again, no reason to panic, but we should be watching carefully.

Despite the negative household survey job gains, the unemployment rate dipped down to 4.3% vs. 4.4% last month. That's because the labor force contracted by 429,000, which pushed the labor force participation (LFP) rate down to 62.7%. LFP is calculated by adding those who are employed plus those actively looking for work and dividing that sum by the total non-incarcerated adult population. In other words, what percentage of the total potential labor force is an active part of the job market. 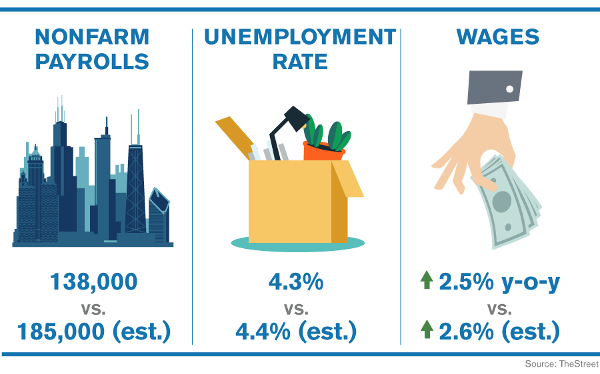 LFP is an important statistic, but it has been strangely volatile over the last 18 months, bouncing from as high as 63.0% to 62.6%. That might not sound like a lot, but it represents a fluctuation of over one million workers. I don't believe that there are a million workers drifting in and out of the labor force over this time period. I think what is more likely is that something is happening that is contributing to statistical noise. That leaves me putting less weight in the exact unemployment rate than I might otherwise.

Wages rose 0.2% month over month and 2.5% year-over-year, both in-line with the previous month. That's ever so slightly below survey, but not a game changer. There is ample anecdotal evidence that wage pressure is building, especially on the lower-end of the wage scale. The lack of headline wage growth might have something to do with the mix, as job gains recently have come more on the lower-skill end.

What does this mean for the Fed?

My bet is that the Fed still hikes in June. I don't think the Fed as a group buys this idea of stall speed that I mentioned above. I also think the Fed collectively puts more weight on the unemployment rate than I am. I also think it is appropriate for policy rates to be a bit higher anyway. The timing might seem weird, to hike immediately after a soft jobs report, but I still think it's the right move.

The impact is probably more long-term. If job growth is already slowing, it suggests that the Fed is closer to neutral than we might have assumed. I've been of this mind for a while now, that neutral is probably 2% and might be even lower. With the Fed already at a 0.75% -- 1.00% range, that might mean that we are closer to the end of this rate-hiking cycle than many presume. And if that's true, longer-term interest rates don't have to rise much, if at all.

In the short-term, I think there will be choppiness over the next six months around the Fed's hiking plans. I am fairly sure we'll get two more hikes this year, and if so, I suspect the 10-year Treasury will trade higher. But as I've been saying, view this as a trade to make a small amount of money. I don't think longer-term rates are going much higher over the intermediate-term.

Get an email alert each time I write an article for Real Money. Click the "+Follow" next to my byline to this article.
TAGS: Fixed income | Investing | Financial Services | Economic Data | Markets | Economy | How-to | Jobs | Risk Management

Will Western Union Come Through?

Here's how to play WU as it heads into earnings later Tuesday -- and why I'd buy based on the chart if it weren't the 'big' day.

The big insurer's technical indicators aren't conclusive as to the direction its shares will take in the coming weeks.

New York Community Bancorp hides under the radar when compared to major players, but offers a high yield to investors.