As we mark the eighth anniversary of the Great Recession's end, "late cycle" seems to be the term that many are using to describe today's stock market, broad economy and the likelihood of a new recession's start. But here are five reasons why that doesn't seem correct.

We've Moved to a Services Economy, So Business Cycles Are Lengthening
It's true that the National Bureau of Economic Research, which officially determines when recessions begin and end, says the average business cycle between recession and recovery has lasted about six years since World War II.

However, the period that the NBER bases this assumption on is a time when the U.S. economy made a significant transition from a manufacturing-and-exports base to a services-and-consumption one. It's also an era where we saw the dramatic growth of U.S. services employment, as this chart shows: 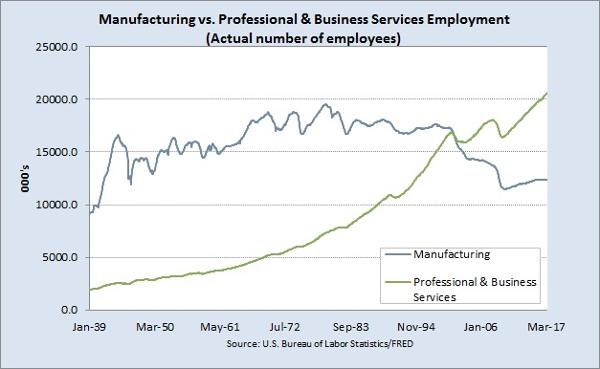 These factors have allowed U.S. expansions to become more sustainable, as internally driven consumption is less susceptible to exogenous economic shocks. If we group the data to reflect this transition, we can see how the average business cycle has significantly lengthened. As this chart shows, the average cycle's length has more than doubled -- and is set to get even longer as the economy becomes more services-and-consumption based:

The key takeaway here is to stay focused on the actual data. After all, it's the data -- not the calendar -- that determine when recessions happen.

U.S. Unemployment Is Low
The latest jobs data also support the notion that today's expansion isn't over yet. While economists can debate whether we're at full employment or not (my view is that we are), the fact remains that U.S. joblessness remains historically low.

For example, weekly unemployment claims -- which are an excellent proxy for the abundance or lack of cyclical work -- are down at levels not seen since the 1970s. As this chart shows, there's been no significant, prolonged uptick in unemployment claims so far in this cycle: 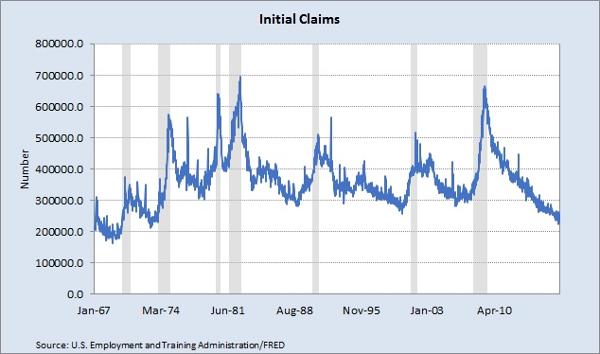 To project where unemployment claims might be heading, let's compare them to the U.S. Labor Department's Job Openings and Labor Turnover Survey, or "JOLTS." (JOLTS is also known as one of Federal Reserve chair Janet Yellen's favorite labor-market metric, so it certainly warrants attention.)

By plotting job openings against claims data, we can see how the two series have fed off of each other in past cycles -- and how record-high job openings are allowing claims to keep grinding lower: 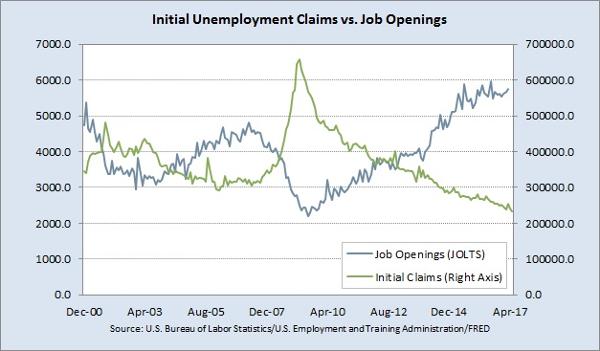 If we were truly late in the cycle and business conditions were softening, I would expect to see the spread between these two series collapse, as we saw in previous recessions (2000-2002, 2007-2009, etc.). But as the chart above shows, there's still quite a bit of territory to cover before these two data points reverse.

Services Look Good
With labor-market health not a concern, business activity takes on added importance at this point in the business cycle. After all, it's healthy business activity that supports employment -- and in turn, a continued expansion.

The Institute for Supply Management's 20-year-old Non-Manufacturing ISM Report On Business survey provides the best metric for measuring the services industry's health (a key factor in a services-based economy like ours). As this table shows, three of the NMI's four components have during 2017 been outperforming the report's lifetime average, as well as beating readings from comparable expansionary/bull markets:

The only lagging component is supplier delivery times -- but that's a questionable data point these days, as advances in shipping logistics have sped up supply-chain processes.

Manufacturing Is Healthy, Too
Not only do we have strength in services, but the manufacturing side of both the U.S. and European economies has also picked up in 2017.

Markit Manufacturing PMI data show that both regions remain well in expansionary territory. The most recent May readings had the Eurozone Flash Manufacturing PMI at 58.4 -- a six-year high -- while U.S. activity came in at 52.5 (much improved from May 2016's 50.5 reading).

The Bottom Line
All of the above show me that the U.S. economy is on solid ground -- not teetering on the brink of recession, as the "late-cycle" thesis implies.

Now, that's not to say that you couldn't interpret the figures above as reaching an "exhausted" stage or a "topping out," which would be a characteristic of a late-cycle scenario. You clearly could. However, when we take all the data above in the context of the new Trump administration and its significant pivot towards business-friendly policies, I believe that we've laid a solid foundation for continued future U.S. economic expansion.

Get an email alert each time I write an article for Real Money. Click the "+Follow" next to my byline to this article.
TAGS: Investing | U.S. Equity | Economic Data | Economy | Markets | Stocks | Trading Strategies

Kass: 5 Big Surprises That Could Impact Markets in 2020

Surprises in the political arena and in corporate profitability are my most important deviations from the consensus.

A crucial question going forward is what will trend employment growth be?

What We Learned From the December FOMC Minutes

The Committee members seem to be cautiously optimistic, and this fits well with their decision to keep rates on hold.

What we have learned is that the holiday season outweighed the last weekly options expiration event of the decade for most investors/trader types. More of the same this week?

Some signs show Japan and Europe are hitting bumps as the year winds down.