Was it really just two weeks ago when the 10-year Treasury yield rose to 3.11%? Three weeks ago that Jamie Dimon said bond yields were headed to 4%? It feels like a long time ago now, after a sharp rally that saw the 10-year rate fall as low as 2.79% before rebounding a bit over the last three days. The political crisis in Italy was of course, the proximate cause of the big move on Tuesday, but to blame this rally just on risk-off would be a mistake. Just as the calls for a 4% yield on the 10-year note represented surface-level analysis, the view that rates should just revert back to 3.1% now that Italy has a government is also surface-level. Here are my thoughts bringing together Friday's jobs report, where things stand in Europe, what that means for the Fed, and then ultimately for the U.S. bond market.

I've been saying for a while that there is enough anecdotal evidence of wage pressure (including from the beige book, company earnings reports, survey data, etc.) that it would eventually show up in the government statistics. Today's release had Average Hourly Earnings up 2.7% year-over-year and 0.3% for the month, both 0.1% better than Bloomberg's survey. While that's OK, it is still in the same range it has been in for the last two years. Nothing about the chart below looks like an upside breakout to me. 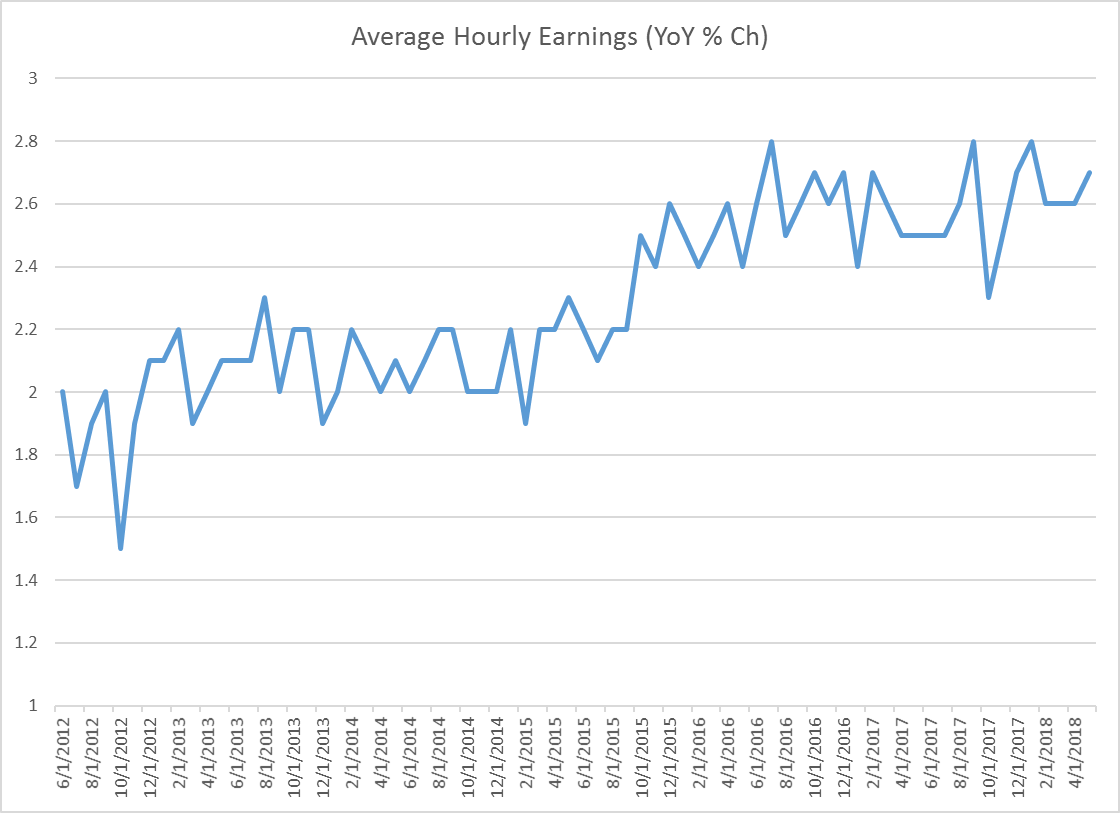 A new, and very credible, theory about why the macro wage figures aren't fitting with the micro-level evidence of wage pressure is as follows: while companies are having a hard time filling jobs at the advertised wage, they are also hesitant to raise wages for new hires because it would necessitate raising wages for everyone. Time will tell if that turns out to be correct, but if true it would suggest companies are just going to live with tight labor, either not expand their output or find ways to do it without additional labor.

Global Reflation: Not So Much

Don't look now, but the much ballyhooed global reflation story is petering out. The U.S. core PCE inflation measure ticked down this last month to 1.8% year-over-year. Eurozone inflation has leveled off. The Eurozone version of a "core" measure is up just 1.1%, in-line with where its been for the last two years. I know, you are saying "what about Germany?", which got people's attention with an above-survey inflation print on Wednesday. Look beneath the surface and you see the whole beat was energy. The "core" year-over-year was +1.7%, right in the middle of the range of the last two years.

There is a big mental mistake I think people are making related to rates: the idea that if the status quo holds with the economy, long-term interest rates will keep rising. I think this view is related to the idea that rates are just artificially low and the natural state of being is that rates should rise.

Pressure on Rates is Flagging

With that point in mind, now consider the fact that if Eurozone inflation is plateauing, if U.S. wage pressure is middling, if inflation pressure isn't necessarily building, then there isn't any pressure on the Fed to hike faster or ultimately get to a higher terminal rate. If that doesn't happen, long-term rates won't go any higher.

And notice I haven't even mentioned Italy, trade wars, etc., that could derail the overall recovery. To me this creates a situation where the pressures on long-term rates are at least balanced if not tilted toward rates falling.

What are the Trading Consequences?

Get an email alert each time I write an article for Real Money. Click the "+Follow" next to my byline to this article.
TAGS: Fixed income | Investing | Rates and Bonds | Markets | Financial Services | How-to | Stocks

Here's why I'm watching the banks -- and Wells Fargo -- in particular right now.

This Action Can Be Challenging to Trade as It's Rotational

I'm staying selective with new trades and am keeping stops quite tight.

Let's review the charts and indicators, and see what's happened since late April.

Here's how to play the stock right now.