When we took a look at Dollar General Corp. (DG)  in the middle of April, we wrote that, "DG could trade sideways around $100 before taking a run at the January highs. Traders should stay long risking below $90 now. $120 is our price target and aggressive traders could add to longs above $106."

Thursday's gap to the downside and big decline would have stopped out longs. DG made a lower high in April and failed to trade sideways. All weaker than anticipated. What could be in store for DG now?

In the daily bar chart of DG, below, we can see that prices sold off sharply to close below the rising 200-day moving average line. Volume was heavy Thursday telling us that traders and investors voted with their feet or their mouse. DG could rally back above the 200-day line and longs from lower levels will be able to exhale. But there is a bear case and it would be if the underside of the 200-day line became resistance. It is too soon to say for sure right now so let's look at some other indicators.

The daily On-Balance-Volume (OBV) line has been neutral since late January. The Moving Average Convergence Divergence (MACD) has been hugging the zero line recently but Thursday's weakness could generate a sell signal.

In this weekly bar chart of DG, below, we can see that prices have broken the rising 40-week moving average line. Prices would need to close back above $90 today to not close below this indicator. The weekly OBV line has been stuck in a range all year while the weekly MACD oscillator is pointed down in a bearish mode.

In this Point and Figure chart of DG, below, we can see a downside price target of $84, which if reached, would break the $85.59 low on the chart. 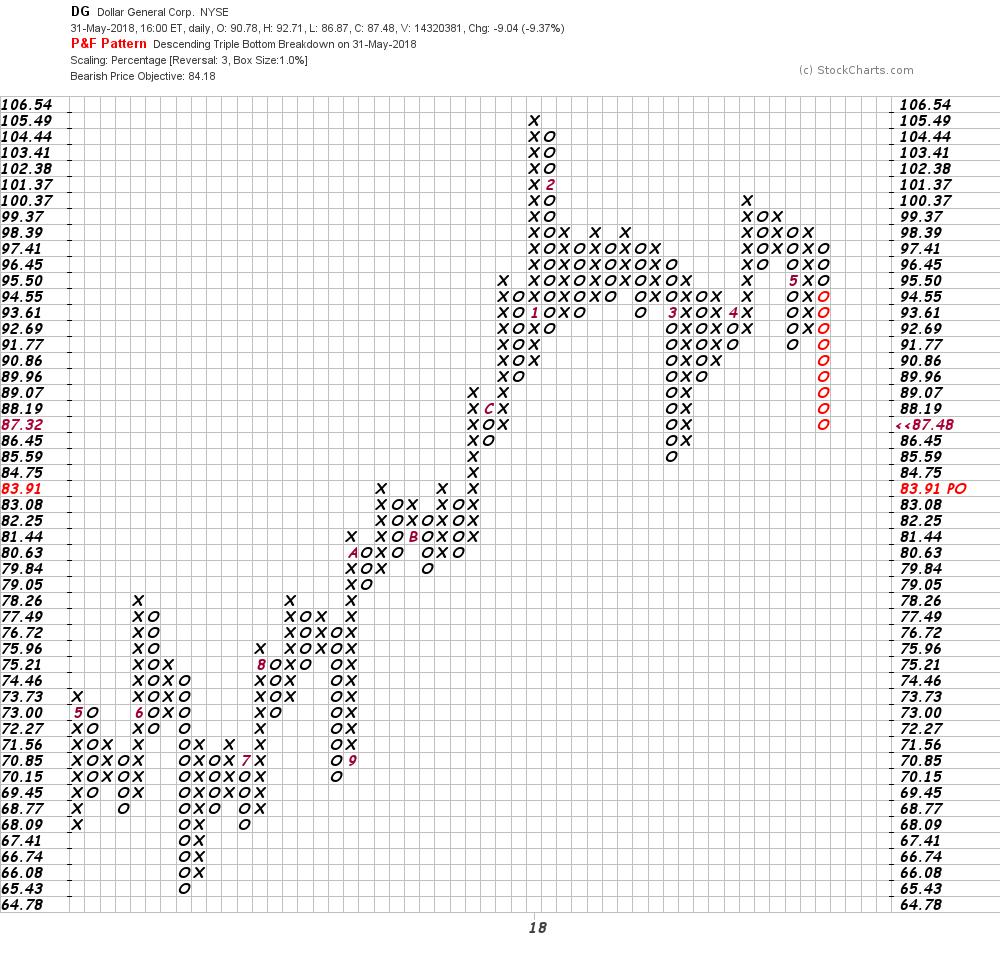 Bottom line: The chart of DG has become precarious with the close below the 200-day line. A close below the March low around $85 will be another strike against the bull case.

Get an email alert each time I write an article for Real Money. Click the "+Follow" next to my byline to this article.
TAGS: Investing | U.S. Equity | Consumer Discretionary | Earnings | How-to | Stocks