Optical fiber maker Corning (GLW) has benefited from billions of devices using its products, and its share price has responded on the upside recently. The bigger picture is that this name has only gotten to the top end of a more than a decade-long consolidation pattern.

Can GLW make an historic breakout on the upside or should we reduce our long exposure? Let's dig into the charts and indicators for some guidance.

In this long-term chart of GLW, above, we can see that prices have more than doubled from their lows in late 2008 and 2012, but GLW has not broken above the highs of 2006 and 2008. Will prices fail again or will we see a breakout that could propel prices to the $55 region in the months ahead? Let's look further.

The daily On-Balance-Volume (OBV) line has risen in the past 12 months, confirming the advance and telling us that buyers of the stock have been more aggressive, with heavier volume being traded on days when GLW has closed higher.

The daily Moving Average Convergence Divergence (MACD) oscillator is above the zero line in bullish territory, but earlier this month crossed to a take profits sell signal.

In this weekly bar chart of GLW, above, we can see that prices are above the rising 40-week moving average line. Trading volume over the past year has declined, even though we can also see the steady rise in the weekly OBV line.

Declining volume in a rally tells us that fewer people are involved and the advance is shaky, but the OBV line tells us a different story. In the lower panel is the 12-week momentum study, which shows that momentum has slowed this year. A mixed picture. 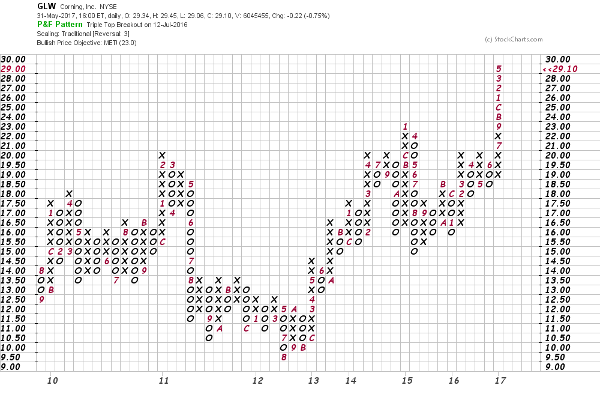 In this long-term Point and Figure chart of GLW, above, we can see that prices made a major upside breakout in September/November (the "9" and the "B" on the chart). The $23 level was a long-term price target that was met, but prices have obviously traded higher.

Bottom line: while there are some signs that the rally could be running out of steam, the price of GLW is still pointed up. What is an investor to do? The last price low on the daily chart is around $26.50, so I would suggest raising sell stops to a close below $26.50.

Get an email alert each time I write an article for Real Money. Click the "+Follow" next to my byline to this article.
TAGS: Investing | U.S. Equity | Basic Materials | How-to | Stocks