Goodyear Tire & Rubber (GT) opened sharply higher this morning. Is this a rally to join or a rally to sell? Ummm. With talk of "peak auto" recently let's see what the charts and indicators suggest.

In this updated daily bar chart of GT, below, we can see that prices gaped above the rising 200-day moving average line but have so far stopped short of the declining 50-day moving average line. A neutral zone. Heading into today GT sold off from $35 to near $31 and then stabilized above $32. The volume of trading in the past week was not light which might have made the chart pattern look like a bear flag. The volume was steady and the On-Balance-Volume (OBV) line inched up which signaled that buyers were being more aggressive. In the bottom panel of the chart the daily Moving Average Convergence Divergence (MACD) oscillator crossed to a cover shorts buy signal.

In this weekly chart of GT, below, we have a very mixed picture of price action and indicators. First we can see how prices broke out above the 2015 peak around $35 and rally to $37 or so. Prices traded above $36 for about three months and turned back down to retest the $32 area. $32 +/- was a resistance zone for much of 2015 and 2016. A retest of a previous area of resistance is not unusual but we need to look deeper. Volume did not expand when prices moved above the 2015 zenith -- it should have but it didn't. The weekly OBV line did rise from June 2016 but it has leveled off the past four months. If the OBV line continued to show strength I would be more encouraged. In the lower panel the weekly MACD oscillator shows a bearish crossover.

In this Point and Figure chart of GT, below, we can see that GT has made an impressive rally over the past five years. Prices are in a down column ("O's"). A rally to $38 would be a fresh upside breakout and open the way to a rally to $49 but a decline to $30 would be bearish, in my opinion. 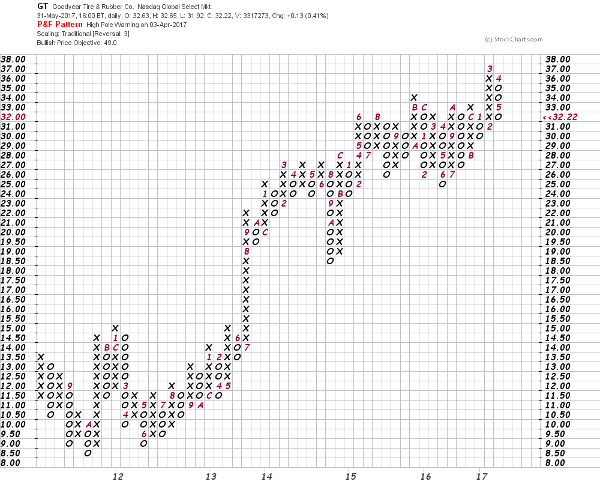 Bottom line -- GT needs to prove itself. The gap today is not huge and could be filled or partially filled. Either way if you want to probe the long side I would risk a close below $31 however I would rather buy strength above $36 and $38.

Get an email alert each time I write an article for Real Money. Click the "+Follow" next to my byline to this article.
TAGS: Investing | U.S. Equity | Industrials | Transportation | Stocks

The charts of U.S. Steel, Freeport-McMoRan and DuPont suggest that the surge in their shares may have just begun.

I will have to give some of my favorite tech names a haircut in the name of balance. Hopefully everyone gained some exposure to gold.