General Mills (GIS) , a true household name, has been declining since last July. This decline has gone on long enough and deep enough that it has weakened the weekly bar chart and the Point and Figure chart.

Further declines seem to be in the near-term future for General Mills, but let me show you the charts and you can think about it over breakfast tomorrow.

The daily On-Balance-Volume (OBV) line has been in a downtrend since early September and while it has improved a little since mid-April it hasn't shown an extended period of accumulation. The 12-day momentum study does show a bullish divergence between the lower price lows in March, April and May but improving momentum levels. This bullish divergence and a slightly improved OBV line may not be enough to reverse an 11-month downtrend.

In this weekly bar chart of GIS, below, we can see that prices have been below the declining 40-week moving average line for a number of months. There is a level or area of support from $54 to $50 but it is on the left side of the chart so we don't know how reliable it will be. The weekly OBV line is still pointed down while the Moving Average Convergence Divergence (MACD) oscillator might signal a cover shorts buy signal in the weeks ahead.

In this Point and Figure chart, below, we can see that if GIS trades at $55 it is likely to precipitate further declines to around $49. 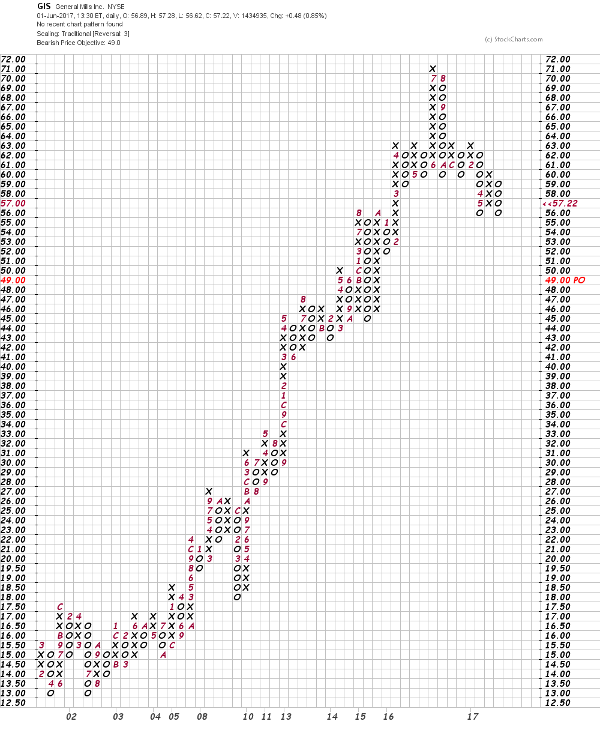 Bottom line: I find there are more reasons to avoid GIS than to buy it.