The key to trading APU has always required knowing the MLP's average yield and then selling when the payout was relatively skimpy and buying back when distributions were historically generous. The more extreme periods offered the most predictability for future price movement.

What could be easier?

Seasonal weather factors and petroleum price fluctuations tend to make short-term traders overreact. Year after year APU has topped out between $46 and $52. During seven of the previous nine years APU bottomed between $35 and $42.

Meanwhile, from 2010 through 2018, APU's annual dividend rate gradually increased from $2.79 to $3.80. There were zero dividend cuts during the last fifteen years. 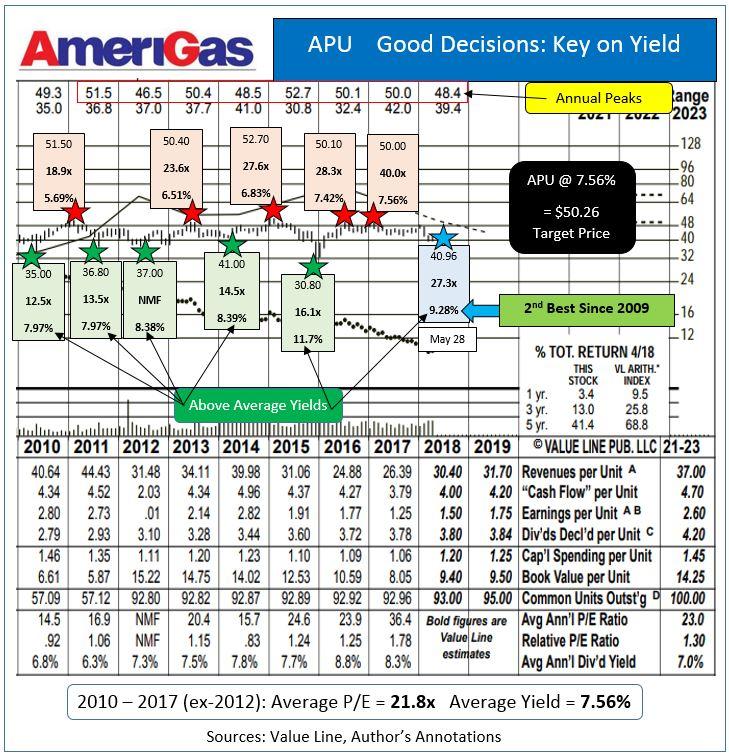 AmeriGas, at its May 25, 2018, closing quote, is relatively cheap right now. The MLP's 9.28% yield is the second best dating all the way back to 2002. Every previous better than average yield entry point (green-starred above) proved to offer a decent rally within months.

Reverse engineering a simple regression-to-the-mean yield of 7.56% on today's $3.80 annual distribution rate suggests a 12-month target price of $50.26 as reasonable. Trading out at the level would represent better than 30% in total return if it takes a full year to achieve.

That goal is not farfetched. APU topped out above $50 during five of the previous seven years. It exceeded $48 in eight of the nine years from 2010 right through 2018 YTD.

Independent analysis from Morningstar seconds my opinion. Morningstar does not give 12-month price targets. It does, however, indicate APU's present day fair value as $46 per unit. 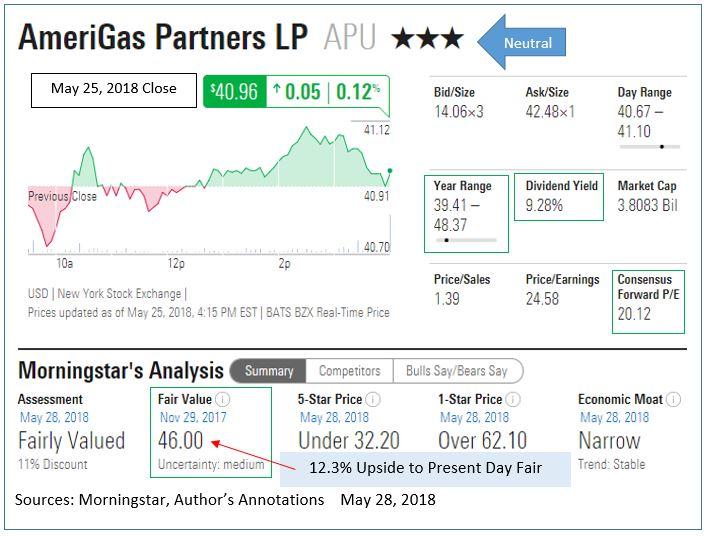 Their very conservative total return projection thus sits at 21.58% if AmeriGas reverts back to normal over the coming year. Compare that to bank CDs, T-bills or shot-term bonds and APU starts to look pretty sexy.

The key to playing securities like this is not to get enamored of them when they run up in price. Once their yields reach below average annual rates they need to be sold to avoid riding the elevator back down.

APU is no higher today than it was in the second half of 2010. It was eminently tradable, though, since then for fine gains along with its generous quarterly payouts.

Income oriented accounts should consider owning APU now with an eye towards exiting in the $48 - $50 range when the next run up occurs.

This column originally appeared earlier today on Real Money Pro, our premium site for active traders and Wall Street professionals. Click here to get great columns like this even earlier in the trading day.

Get an email alert each time I write an article for Real Money. Click the "+Follow" next to my byline to this article.
TAGS: Investing | U.S. Equity | Energy | MLPs | Stocks