Moreover, between Epyc's competitive strengths and Intel's  (INTC)  latest manufacturing process delays, AMD has a golden opportunity to significantly add to its share gains. And this opportunity might not still be fully baked into AMD's stock.

A new server launch from Cisco Systems  (CSCO)  shines a lot on both Epyc's OEM traction and competitive strengths. The server, known as the C125 M5, supports up to two AMD Epyc CPUs (including AMD's top-of-the-line 32-core CPU), 2TB of memory and six storage drives. It also packs a slew of I/O connectivity options for Ethernet adapters, accelerator cards and accessing external storage.

Notably, four of these servers can be placed within Cisco's C4200 server chassis, which is just 3.5 inches tall. Cisco claims the C125 and C4200 deliver a 128% improvement in server CPU core density relative to its existing Intel-powered offerings. "[F]or a high-density play, [AMD] was a great choice," a Cisco exec noted.

All of this fits with remarks made during a February Morgan Stanley conference about how Epyc's flexibility -- in terms of delivering "the right mix" of processing power, memory and I/O connectivity -- is a big competitive strength. In Cisco's case, the company wanted to optimize for processing power density, and found AMD to be a useful partner. 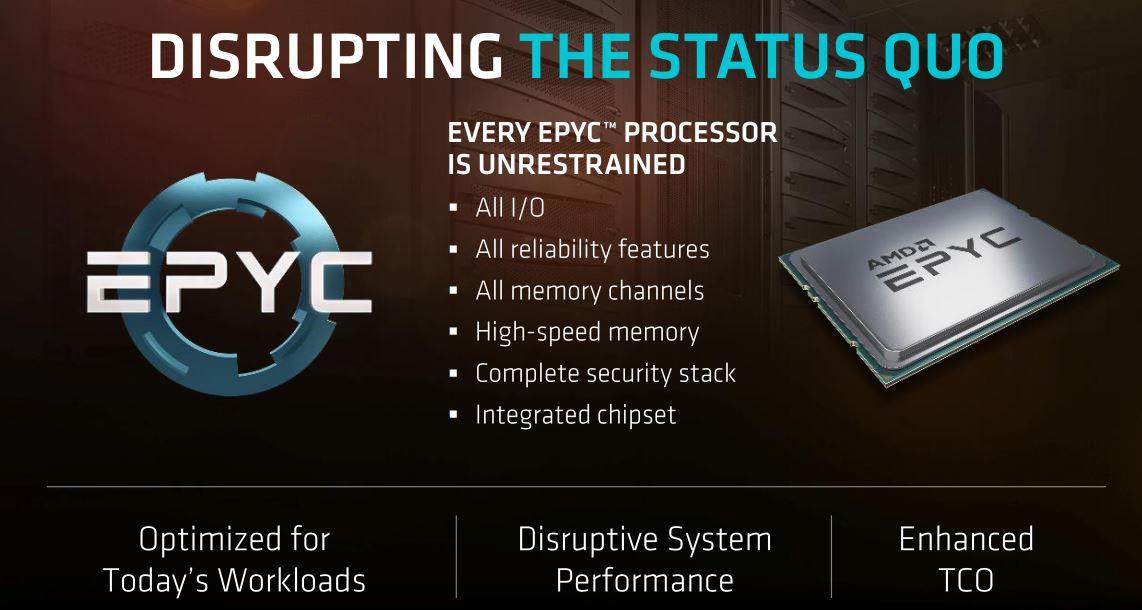 In addition to Cisco, AMD has landed Epyc design wins with the likes of Dell, HP Enterprise  (HPE) , and Lenovo. It has also disclosed a handful of notable enterprise Epyc clients, including Dropbox (DBX) and Bloomberg, along with deals with Microsoft  (MSFT) , Baidu  (BIDU)  and Tencent (TCEHY) through which the companies offer access to Epyc-powered servers via their public cloud infrastructures.

Along with its platform flexibility, the Epyc line's aggressive pricing relative to comparable Intel Xeon CPUs has been a big selling point. Other ones include advanced memory encryption options and the ability of single-CPU Epyc servers to support a variety of features that Intel reserves for servers featuring two or more CPUs. Going forward, Epyc's modularity -- individual Epyc CPUs feature multiple chip dies connected through a high-speed interconnected, rather than one giant chip die -- could also prove a strength, making it easier for Epyc CPUs to scale to higher core counts.

And based on the way things look today, AMD's second-gen Epyc CPUs, which are set to begin sampling by year's end ahead of 2019 launches, could have an edge against Intel's Xeon line that was unthinkable a few years ago: The use of a superior manufacturing process.

During its April 26 earnings call, Intel disclosed a fresh delay for its much-delayed 10-nanometer (10nm) manufacturing process, stating volume production of chips based on the process (previously set to start during the second half of 2018) won't begin until some point in 2019. That means Intel's most advanced PC and server CPUs will rely on its 14nm process node for some time longer.

This is music to the ears of AMD. Whereas its first-gen Epyc chips rely on a 14nm process from manufacturing partner Globalfoundries that's seen as inferior to Intel's 14nm process, AMD's second-gen Epyc CPUs will rely on a 7nm process that's seen as competitive with Intel's 10nm process. Other Intel server CPU rivals such as Cavium  (CAVM)  and IBM  (IBM)  also have to be pleased.

Throw in the fact that the second-gen Epyc parts will use a revamped CPU core architecture known as Zen 2, and it's quite likely that many firms will take a close look at the parts. Cloud giants, who on the whole have been much more aggressive than enterprises when it comes to developing and adopting cutting-edge data center technologies, could especially show interest.

Intel, to be fair, still has a lot of competitive strengths in this fight. Intel's Xeon lineup remains far broader than AMD's Epyc lineup, and there's no shortage of enterprises and cloud providers that are still very loyal to it. Also, Intel's large investments in developing complementary solutions for its Xeon line -- they include as co-processors, high-speed interconnects and next-gen memory modules, as well as programmable chips (FPGAs) that are put inside the same chip package as a CPU -- serve as a big selling point.

However, AMD, which is aiming for a mid-single digit server CPU share by year's end, only needs to take a moderate amount of share from Intel to see a major top-line boost. Intel's Data Center Group (DCG), which gets a very large percentage of its sales from the server CPU market, produced 2017 revenue of $19.1 billion and is forecast on average by analysts to see 2018 revenue of $21.9 billion (cloud demand is providing a lift).

AMD, by contrast, is expected to see total 2018 revenue of $6.7 billion and would only say that Epyc accounted for a "strong double-digit" percentage of its first-quarter sales. If Epyc's revenue can eventually amount to just 10% of Intel's DCG revenue, the impact would be enormous.

With AMD's stock still only trading for about two times its expected 2018 revenue per share, and with the company also well-positioned to add some more PC CPU share, this growth opportunity arguably hasn't been fully priced in yet.