Under Armour  (UA) has been in retreat since August with two large downside gaps helping to define the downtrend. Prices have made a bearish line formation the past four months and we are likely to see prices work still lower in the weeks ahead.

Let's examine the charts and indicators to see how low UA can go.

In this daily bar chart of UA, below, we can see the failed upside probe in August marking the peak. Prices quickly started lower and broke below the declining 50-day moving average line. A downside price gap in late October did not have a lot of volume behind the move but it was still very bearish. Prices tried to bounce in December and made a little movement into the gap but were quickly rejected. Prices gaped again in late January but this time volume was very heavy. The stock tried to stabilize in February-May but buyers of UA never became aggressive.

The daily On-Balance-Volume (OBV) line has been weak since last June and tells us that despite the price weakness sellers are still more aggressive. The trend-following Moving Average Convergence Divergence (MACD) oscillator has slipped below the zero line again for an outright sell signal.

In this Point and Figure chart of UA, below, we can see that prices have been in a $17-$20 trading range since February (the red "2") but with more activity in the upper half of this range. More action in the upper half means more failures to move higher, which is bearish. A break of $17.08 is likely to open the way to further declines to $15.47 according to this chart. 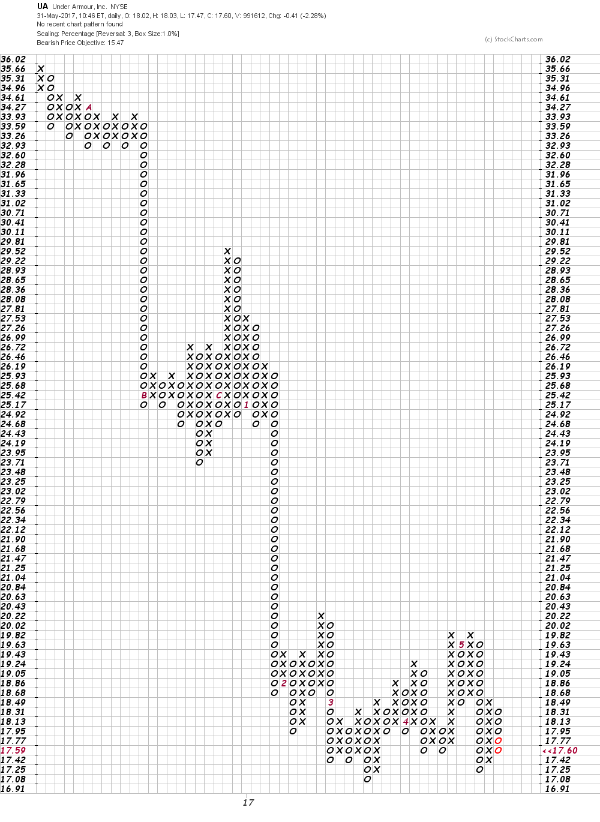 Bottom line: Without any technical clues that UA could be bottoming, we look for further price weakness in the weeks ahead.