No one really ever saw him. Some folks did say the air cooled significantly, almost violently. Other folks, well those folks just hid at the first sign of trouble. It started early. The arc of a swinging curved, horrible blade atop that long handle held by those grotesque fingers. The brave people tried to rally. An attempt to make a stand maybe a half hour into the day did not last. The less brave among them broke into a run. The crowd thinned. Whoever was left found themselves trampled.

A multitude of changing market conditions bring about fears of the next significant decline. Are we merely the last members of the once proud Usher family? Will anyone stand and defend this house?

Italy struggles to form a government. Yields ran much higher for Italian government debt. A crowded trade no doubt.

Are fears that Italy, Europe's largest debt market, might actually re-denominate the nation's sovereign obligations into a devalued version of the old lira realistic? Is Italy "too big to fail", or is Italy "too big to save?" Someone else asked that question, and I do not have an easy answer. What we do know is that the bid side disappeared on Tuesday for this product, and that a rough 11% of the aggregate balance sheet of the Italian banking sector is comprised of Italian government debt. Obviously, these banks led the banking beat-down across Europe that even spread across the Atlantic on Tuesday.

For U.S. banks, it was not simply a fear of contagion, or a fear of the impact of one leaking dike's impact on a complex system (We have spoken on this), but also the surge in safe-haven assets that caused a spike in U.S. Treasuries that allowed the U.S. 2/10 curve to near just 40 basis points at the session's worst moments. This also put a premium on U.S. dollar valuations. That particular issue would be likely to persist, in my opinion.

Italian markets might be showing some relief Wednesday morning, but the expectation that there will be snap elections held in that country sometime in July should suppress euro valuations enough over the next two months for the greenback to sustain at least some of this recent price action.

As for the futures markets, the probability that the FOMC will increase the fed funds rate in June is back up to roughly 82% after falling to 76% Tuesday, and the odds of a fourth 2018 rate hike in December are back above 20% after falling to 14%. The 2/10 spread has "steepened" to more than 44 basis points Wednesday morning.

Obviously, I cannot speak for everyone, but here's what I did Tuesday. I added to long positions on Tuesday in both Goldman Sachs (GS) , and JPMorgan Chase (JPM) . I also hold Citigroup (C) , but stayed firm on that one. In fact, come to think of it, I did not sell a share of any stock at all on Tuesday. The only sales that I did make were short sales of put options. Hmm, didn't realize that I was that bullish? Perhaps, I'm not. Perhaps, I understand that one way to turn a buck technically is to recognize when a name has traveled too far in one direction and to try to take the other side at an appropriate level. Easy? No. Gut-wrenching? Only if your gut wrenches. Mine does not.

You see, before we get to any snap election in Italy in July that might even result in an increase in international business for U.S. banks, we will run into the Fed's CCAR (Comprehensive Capital Analysis and Review) results in June.

You kids have heard of the Fed's stress tests haven't you? What does CCAR mean to me? Well, for one it means that there could be an increased likelihood that these banks will return more dough to people like us in the form of both dividends and share repurchases. Forward-looking P/Es are low, and justification for a jazzed up repurchase program should be easily made for any of these banking giants.

Don't forget, that Congress just voted to ease Dodd-Frank regulations regarding just who's "too big to fail." That is a tail wind for regional banks that could free up some dough for activities such as mergers and acquisitions. Then the Fed will, today, take the first step in easing the Volcker Rule (prohibiting prop trading among banks) by commencing with an open board meeting to discuss the topic.

Fear the banks? No, I'll save my fears for the creatures of the night, and that inevitable day when the reaper (and he better bring more than that sickle) and I do actually meet. The banks I will trade.

5 Reasons That I Bought JPMorgan Tuesday

The five reasons that I bought JPMorgan Chase when the stock sold off yesterday have nothing to do with a low forward-looking valuation, the coming CCAR results or the easing of banking regulations. 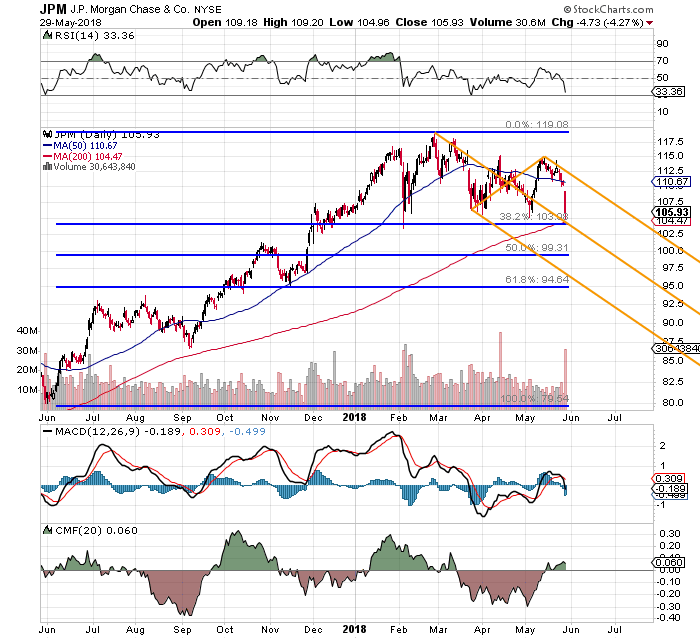 Technical support should have, and did at least for the day show up as the stock approached:

1) A 38.2% Fibonacci re-tracement of the June through February move higher.

3) The central trend line provided by an Andrews' Pitchfork model beginning with that same February high.

4) JPM has shown remarkable resiliency every time that Relative Strength has even come close to 30.

5) Chaikin Money Flow has finally turned green after two months in the red.

My Plan (Think anyone else will give you detail like this?)

Is it too late to get in on this trade? I don't think so. Obviously, entry as close to the 200-day simple moving average (SMA) as possible would be more desirable, but my price target for the shares that I tacked on Tuesday would be $111 with a two-week timeline. My larger position is longer term. My target for those is the $119 year-to-date highs.

I am already short June 15 $100 puts, which is obviously where I add more shares if need be. Those still paid $0.45 as of last night. My point of capitulation would be the $98 level as that would represent a break of the 50% Fib line. Should that happen, I would like to buy back the shares at $90 in a worst-case scenario. I am already short those puts with a January expiration, and those puts still pay $2.45.

Get an email alert each time I write an article for Real Money. Click the "+Follow" next to my byline to this article.
TAGS: Investing | U.S. Equity | Regulation | Markets | Financial Services | Futures | How-to | Politics | Stocks