There are few guarantees in the business of financial speculation, which is the business the crowd is in when justifying the reasons not to reduce exposure into all-time highs. Typically, bull markets end with a focus on a narrow sector of stocks, or in some cases assets. Remember the Nifty 50's, Dotcom's, and Mortgage Lenders?

While there are several assets to choose from in the current environment of fearless certainty that markets can only rise, few are as thin as the blow-off in Bitcoin. That said, while this asset has entered the parabolic portion of its mania, where prices move vertically, there is a recognizable pattern of the crowd's behavior that is able to be forecast. Let's look. 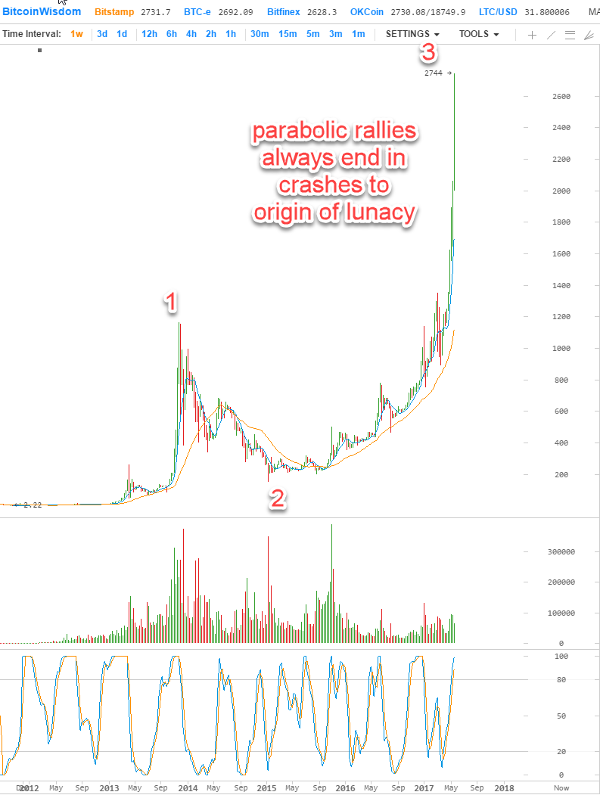 This is a chart of Bitcoin, represented by the Bitstamp exchange prices, using weekly bars. It shows the labeling of a map toward the $3,500 +/-$500 target zone, which should be seen in this calendar year, as long as $1,400 is broken below. Until then, our DSE's (decision support engine) pattern recognition algorithms strongly suggest this labeling.

If we take the liberty to forecast what a historically orthodox finale might look like, chart two, below, anticipates the path with DSE's red arrow. Then, the goal is to track where prices are within the decline in order to position for the final thrust to new all-time highs. While the rally will be profitable for those with the stomach to ride it, the exit into wave 5's maturity will be key to make the ride worthwhile. If profits can't be captured, the aftermath of a parabolic rally will be very painful. 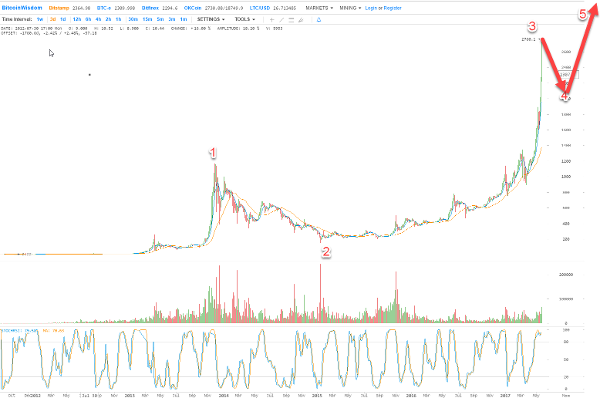 Chart three, below, zooms in on the forecast of wave 4's structure, which is likely two-thirds complete. The pattern of decline should be down/up/down, and the labeling in this third chart shows the down/up pattern has taken classic form, according to Elliott Wave Theory. 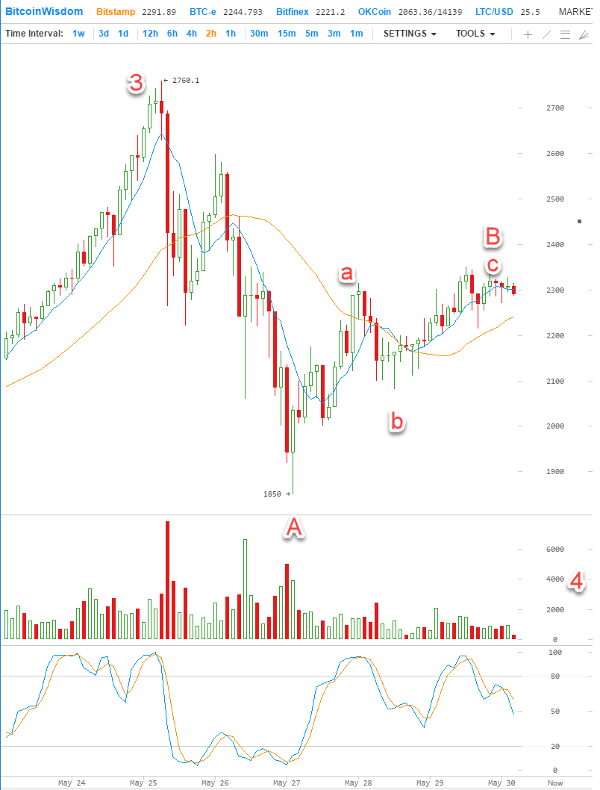 Members of our live-market Trading Room and DSE Alerts services have been well informed of these gyrations, which now suggest awaiting the coming decline's target before adding to any long exposure. Then, after $2,800 is exceeded, DSE will go on red alert for the big exit, and trail protective sell-stop orders behind rising prices as wave 5 burns itself out in a blaze of glory.

Historically, news will arrive from somewhere in the $3,000 area to justify the largest decline in Bitcoins since their birth. But we will address that when needed.

For updates on this analysis, as well as other trading opportunities, try Ken Goldberg's DSE Alerts service for free for a couple of weeks, or contact him at support@dsetrading.com

Get an email alert each time I write an article for Real Money. Click the "+Follow" next to my byline to this article.
TAGS: Currencies | Markets | Investing

Oh, Dollar, Where Do You Go From Here?

It is only a matter of time until the Federal Reserve will need to pull back from its constant balance sheet expansion and quantitative easing.

Take the Pedal Off the Metals?

A deep dive into gold, silver and copper.

Silver has taken a hit of late, but we should see buyers start to step in.

As a Curve Ball Whops the Market, I See a Golden Opportunity

How does one navigate markets as the quarter unwinds with so much drama? Here's how.