There's a little trick that folks use when forced to spend time out in the middle of nowhere. Nobody really likes spiders, snakes, and scorpions. Well, some kids do, but nobody enjoys being bit or stung. Before moving or putting on clothing in the darkness of early morning, it's the smart ones that start out real slow. Never know what crawled into your bag for warmth. Those same folks will shake out their clothing, and their boots fairly vigorously as well. You learn these things by watching the older guys. We used to have a saying on Wall Street. "Short weeks are always long." A four day work week might seem harmless enough at the outset. That is until you shake it out, and all the gnarly creatures of the night start hitting the ground.

This week is no different. For one, this Friday brings the month of June. That means that another "Jobs Day" is upon us, not to mention that before we get there, we'll run through data on home prices, consumer level inflation, and a revision to Q2 economic growth. There's a lot more than that. Tomorrow will be a busy day as far as the Federal Reserve Bank is concerned. Not only will the central bank bestow upon us the collection of anecdotal economic evidence from across the 12 districts known as the Beige Book (meaning that a policy decision is two weeks out.), but the Fed is also planning to hold an open board meeting to discuss changes being made to the Volcker Rule. This potentially will have an overt impact on just how prohibitive the rules surrounding proprietary trading by the banks will be going forward.

The Financial sector will move on this news, particularly bigger institutions, such as Goldman Sachs (GS) , JP Morgan (JPM) , and Morgan Stanley (MS) . Last week, financials underperformed the broader equity market as bank stocks seems to react more to compressing yields and a flattening 10/2 curve than to the fact that the House of Representatives voted to ease Dodd-Frank regulations covering "Too Big to Fail" institutions.

"Solo: A Star Wars Story" opened this weekend. The results were unimpressive, at least when measured against both expectations, as well as the past results of the "Star Wars" series. The new movie badly under-performed "Rogue One", which was released in 2015. That might be the best comparison as these two offerings are stand alone movies that offer a backstory, and are not part of the "Star Wars" series of epics. This movie is said to have produced a gate that missed expectations not just domestically, but also in China, South Korea, Brazil and the UK.

Has the Walt Disney Co. (DIS) killed the golden goose? Have they gone to the well too many times too quickly since they paid $4B clams for Lucasfilms in 2012? Has the Disney magic run dry? It's easy to point out that recent Disney releases, particularly from the Marvel studios have done very well. Movies such as "Black Panther" and "Avengers: Infinity War" among others have opened very successfully. Fortunately for Disney fans, and for fans of the "Star Wars" series, the next sequel in the epic series is not due for release until 2019, that is December of 2019. If there was a touch of overkill here, the wait of a year and half for the next movie should be enough to wither that feeling among fans. Let's not forget that "The Last Jedi" was just released in December of last year, only putting six months between offerings under the "Star Wars" franchise. There really is a chance that Disney was trying to define just where the line was as far as maximizing, and monetizing this product?

Am I worried as a shareholder? Well. I would have rather seen a robust gate for this movie, but I don't think this is especially harmful for the company, unless interest in the franchise is really starting to wane. As a kid of the 1970's, that would surprise me. I find the headline risk surrounding the developing bidding war with Comcast (CMCSA) for several key assets of Twentieth Century Fox (FOXA) as a greater danger. Personally, I do not add to my DIS long unless I see market prices below par ($100).

What's worse? Plummeting oil prices or spiking Italian bond yields. How about I let you know after the European close today? Bottom line here gang, is this: European markets are trading in the hole this morning. Italian markets are obviously being hit the hardest. Italy will likely face new national elections. Things are nor so rosy in Spain either, where Rajoy could face a no-confidence vote this week. Who's looking to take control? Populists in Italy? Socialists in Spain? Free market pricing in European bond markets? That's right. I said it. As you can clearly see, the action is putting pressure on banks in the region this morning. The banks own these bonds, and while uncertainty reigns, the ECB is no longer as sure a thing as it once was. Lions. Tigers and BEARS. Oh my.

As for crude, we all know that Russia and several OPEC nations would like to ramp up production now that market prices for the commodity had reached the highest levels since 2014. Buried under that news was Friday's Baker Hughes report on active US oil rigs. That number printed at 859, up 15, the largest single weekly spike in more than three months despite known bottlenecks in moving the stuff out of the Permian Basin. If the supply side of this market persists in threatening recent gains made by the sector, where to go? My thought is, and my dollars support the idea that oil services and refiners will outperform explorers and producers going forward.

You've Got My Attention

Did you happen to noticed the oddity of Splunk's (SPLK) performance last Friday? I'm flat this name gang, despite my fondness for the cloud. I remain long Adobe (ADBE) , and Salesforce (CRM) as well as Microsoft (MSFT) , and Amazon (AMZN) for their innovation in the space and for their leadership.

SPLK gave up 5.2% on Friday to close at 110.26 in response to Q1 earnings that hit the tape on Thursday afternoon. The firm beat expectations for both EPS (still negative), and revenue where they also raised full year guidance. So... where's the beef? Operating margins were still negative, but better than they were a year ago, so that's not it. Billings. I'm told that was the problem. Growth in billings slowed significantly due to new guidelines on when billings are recorded. In what might be considered a paradox considering how the share price fared on Friday, multiple analysts increased their target prices for this name into the mid to high 120's. Maybe I buy some equity... small, but that's not really the play. 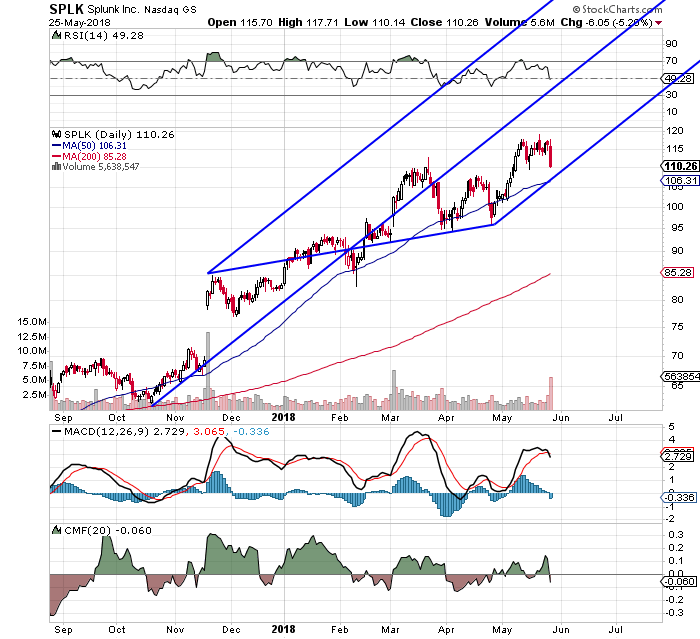 So, now SPLK... You have my attention. Where is my point of entry? Do I even want to enter? The shares at this lower price still trade at 75 times forward looking earnings. There certainly is risk. Operating margins need to catch up to gross profit margins. Debt, thankfully is not an overwhelming problem.

The bottom line is that this is a growth story. A sustained growth story. Three year EPS growth rates stand at 66%, and three year revenue growth stands at 39%. Both of these rates are lofty, yet both are showing some signs of slowing down a bit. It's plain for us to see that support in May, and resistance in March were both found at the 110 level. Yet in order to take on the risk, I think I need a larger discount. April resistance showed up at 108, and the 50 day simple moving average closed on Friday at 106.31. Perhaps somewhere in there is where I will find my risk/reward proposition more adequate.

A sale of 107 SPLK puts expiring this Friday (just four days away) still paid 80 cents on Friday night. If one dares, one could push out expiration another two weeks to the fifteenth, and get paid, as of Friday more than $2 to do so. That way, even if forced to eat the shares, the trader's net basis is below 105. The timid (no offense, this is how you turn a buck at significantly reduced risk of injury.) could look at June 15 $100 puts. Those went out at 62 cents. Boring? Making money using your brain is never boring, gang. Neither is feeding the family.