This week we are going to take a look at investing opportunities outside the U.S., giving Hawkins a much needed break from her usual head-banging over the markets' obsession with Fed speak and focus instead on events that could have a massive impact on the stock markets for the world's third largest economy.

Last week at the Corner of Wall and Main we mentioned that one of Hawkins favorite global investors, Louis-Vincent Gave, had warned investors at the Altegris Strategic Investment Conference that they were likely all unknowing participants in the world's single largest crowded trade, the absence of China in their portfolios.

The past year, China's two main stock markets, Shanghai and Shenzhen, experienced an enormous bull run with their A shares indices up over 140% and nearly 180% respectively versus the S&P 500 and NASDAQ which have returned 10.7% and 20.2% respectively. The average Price-to-Earnings ratio for A shares on the Shanghai stock exchange is currently just shy of 30, (according to the Shanghai Stock Exchange) while on the much smaller Shenzhen stock exchange the average P/E is nearly 65, (according to the Shenzhen Stock Exchange.) 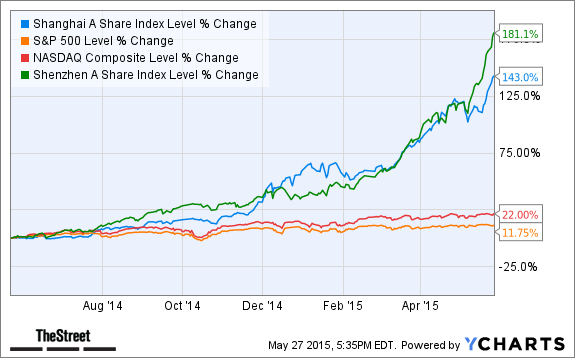 Much of this run up can be attributed to an increase in domestic demand for investment vehicles, rather than improving fundamentals. According to The Economist, almost eight million new trading accounts were opened in the first three months of 2015 alone.

In April, regulators increased the number of accounts an individual can hold from one to 20, which led to a whopping four million accounts being opened on average every week since then! This increasing demand is driven by the emergence of the middle class, the relaxing of restrictions on investing, the slowly maturing capital markets and the material impact of Chinese culture which is more likely to believe that a directional move is to be jumped on such as, "black is hot tonight" at a roulette table.

During the last Chinese market crash of 2007, investors were unable to buy shares on credit. Now they can and the outstanding volume for share financing has reached about 3% of GDP, further expanding the demand base. To put the total market capitalization into perspective, however, it accounts for less than 50% of GDP in China, versus the U.S., which is well over 150% according to the World Federation of Exchanges. The recent jaw-dropping stumbles of two of Hong Kong's best-performing stocks, Hanergy Thin Film Power Group and Goldin Financial Holdings/Golding Property Holdings, haven't put much of a damper on the markets' uptrends. They also did not stop FTSE Russell from announcing the launch of two emerging market indices in which Chinese A shares will have a 5% weighting, versus no presence previously, giving Chinese shares a larger weighting than Russia.

MSCI is due to announce its own decision on the inclusion of Chinese A shares on June 9. The expansion of Chinese presence in indices means increased demand for the shares, lending further credence to Mr. Gave's comments in San Diego that boils down to you're missing out if you're not involved. According to FTSE estimates, China would account for more than half of a typical emerging market portfolio if it were to meet all nine of FTSE's criteria for inclusion in emerging market indices. According to The Financial Times, the Chief Executive of FTSE Russell thinks that Chinese stocks are likely to meet the full nine criteria versus only seven today within the next two years.

Yesterday, the International Monetary Fund declared that China's currency is no longer undervalued, a milestone for the nation after more than a decade of criticism over Beijing's rigid control over the renminbi. Outside of putting the IMF at loggerheads with the U.S., which still claims the renminbi is significantly undervalued, this is an extremely meaningful step as we approach the IMF's review of Special Drawing Rights in October, a review that occurs only once every five years. Click here for details on just what the SDR is all about.

What matters to investors is that China wants to be included in the basket of currencies, which today consists of just the U.S. dollar, the Japanese Yen, the Pound Sterling and the Euro. If the IMF accepts it as part of the SDR, there are estimates that at least $1 trillion of global reserves could flood into Chinese assets. The 187 central banks in the IMF would have to hold China's currency in reserve and even more powerful, the weighting for Chinese stocks in the MSCI All Country World index could quadruple.

So while yes, the rise in Chinese stock indices over the past year has benefited dramatically from the increased demand due to the explosion in Chinese trading accounts, that jump in demand is nothing compared to what could happen if the IMF grants the nation's request to be included in its SDR.

Yesterday's move by the IMF lends credence to the belief that China will get its wish. Keep in mind that the renminbi is currently the fifth most used currency for global transactions and is the second most used in trade-related finance, surpassing the euro. China is the world's third largest economy, after the Eurozone and the U.S. and it reasonably is arguing that the inclusion of its currency would improve global liquidity in times of crisis.

For a nation focused on getting accepted into the SDR, last week Hanergy and Goldin were a bit like having the much-loved family dog track the unpleasant consequence of his morning's counter-surfing sausage raid through the house moments before dinner guests arrive; an unpleasant situation, but one that is unlikely to cancel the evening's affair.

For those who'd like to get involved on the equity side, the iShares China Large-Cap ETF (FXI) has an over 50% weighting in financials while Market Vectors China A Share ETF (PEK) has more moderate exposure to that sector at just under 40% with nearly 20% in industrials. For something more on the currency side, PowerShares Chinese Yuan Dim Sum Bond Portfolio (DSUM) give exposure to bonds denominated in yuan but traded outside of mainland China. In 2014, issuance of dim sum bonds reached nearly 600 billion RMB. As of last week's close, the fund had an effective duration of about two years with a yield-to-maturity of just over 4% and a weighted average coupon of 3.74%.

Get an email alert each time I write an article for Real Money. Click the "+Follow" next to my byline to this article.
TAGS: Investing | U.S. Equity | ETFs | Funds | China | Markets