Old Dominion Freight Line  (ODFL) rallied until early December, but then a nominal new high in early March was not confirmed by our indicators.

ODFL now looks vulnerable and could back up below its April low.

In this daily chart of ODFL, above, we can see a weakening pattern to our indicators since early March. When ODFL rallied in February, the trading volume did not expand and the daily On-Balance-Volume (OBV) line failed to turn up with the price action, suggesting that traders and investors sold the rally. The OBV line has continued to decline and suggests further aggressive selling.

The Moving Average Convergence Divergence (MACD) oscillator moved below the zero line in March for an outright sell signal. Prices are above the rising 50-day and 200-day average lines, but the two lines have narrowed and we could see a dead cross in the weeks ahead.

In this weekly bar chart of ODFL, above, we can see prices are above the rising 40-week moving average line, but the line could be tested in the near term. The weekly OBV line has been weak for several months and the weekly MACD oscillator is still pointed down. 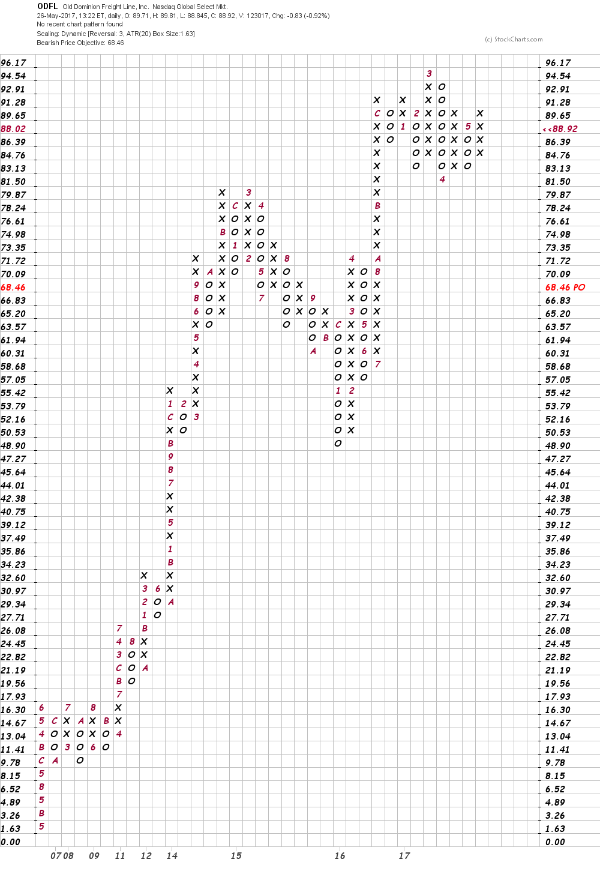 In this Point and Figure chart of ODFL, above, we can see a downside price target is suggested.

Bottom line: The charts and indicators on ODFL are not screaming "sell," but they have weakened and caution is warranted. If long, I would suggest raising sell stops to a close below $83.