A Face From The Ancient Gallery

Thursday. Not quite mid-day. It was probably a little before you stuffed that pie-hole of yours with whatever deep fried goodness passed for your lunch. The President of the United Sates spoke to the nation. He spoke of a military that was at the ready if need be. My defense names rejoiced. This came after first notifying North Korean leader Kim Jong Un in writing that there would be no June 12 meeting between the two in Singapore.

The End? Not even close. Stocks rallied around midday, and though closing lower on the day, did manage to reach that second bell trading at levels far closer to the highs than the lows of the session. The president had taken offense to North Korea's open hostility over the past week or so, as the summit neared. Late yesterday, President Trump, while addressing military preparedness, as well as the continuation of economic sanctions did indicate that once the North Korean leader was willing to "engage in constructive dialogue" that he would be waiting. North Korea too, was quite conciliatory in response. That nation's state media echoed that sentiment back toward the US in a published statement.

What's obvious is that the bigger picture is still really US/Chinese trade, and the protection of US intellectual property rights. North Korea would appear to simply be the side show, being used as a prized chip by both President Xi and President Trump. A dangerous chip? Any of you kids remember the Cold War? This could be every day. In fact, in the age of the aggressive algorithm, headline risk is something that hits markets in a fast and furious way. We have discussed that. What if a new Cold war is around the corner, a new "Cold Trade War"? Better grow some callouses. I use the strength in defense to liquidate my long in Lockheed Martin (LMT) , while enhancing my focus on Raytheon (RTN) and Northrop Grumman (NOC) .

I sat in my office. The clock approached 4 am. That's when the financial news shows finally wake up. Those of us who rise early are pretty much on our own every day until then. I gaze around the office, doing battle with a slight case of writer's cramp. I focus on one of my bookcases. There are several bottles atop that stark piece of furniture, the most prominent, with an easy to read label from my desk is a half empty bottle of Evan Williams Kentucky Bourbon. 86 Proof. I think to myself, how do I line the portfolio with something that is headline proof in an era where the combination of outspoken and volatile political leaders, a twenty-four hour news cycle, and an electronically driven marketplace almost ensure consistent overreaction followed by a reversion to mean at the point of sale?

Energy stocks are among this year's top performers, and easily top dog over the past few months. Energy shares may be President Trump-proof, but they are certainly not headline-proof. The whole sector followed the underlying commodity into the hole on Thursday as Russian Oil Minister Alexander Novak indicated that maybe he would like to engage his OPEC counterparts regarding production levels come next month's meeting in Vienna.

I quickly thought about Consumer Staples, but they are certainly not tariff-proof. Thought about the bond proxies, but they are certainly not policy-proof. That knocks out taking the dividend route. I looked back at that bookcase. In front of the bottle were some unopened bills. Just sitting there. Eureka!! One firm had already suffered some headline risk, and come out on the other side in better shape. In fact, that firm's staunch enemy would be stiff technical resistance rather than another go-around with the president. You know where I'm going by now, don't you?

Cue The Imperial March. The president used the Post Office to take a shot at Amazon (AMZN) several months back. The stock suffered initially. I know that because I am long the name, and tried (with some minor success) to trade around the event. Amazon shed more than 265 points as March turned into April. We get it. President Trump and Jeff Bezos, who also owns the Washington Post probably aren't going to tailgate together on Sunday afternoons this autumn. Can they agree to co-exist? Have they already sort of done so? Amazon may suffer at the mention of being targeted again, but has already shown an unparalleled resiliency. The shares closed last night above $1600 and have been scraping resistance at that level for about a month now. 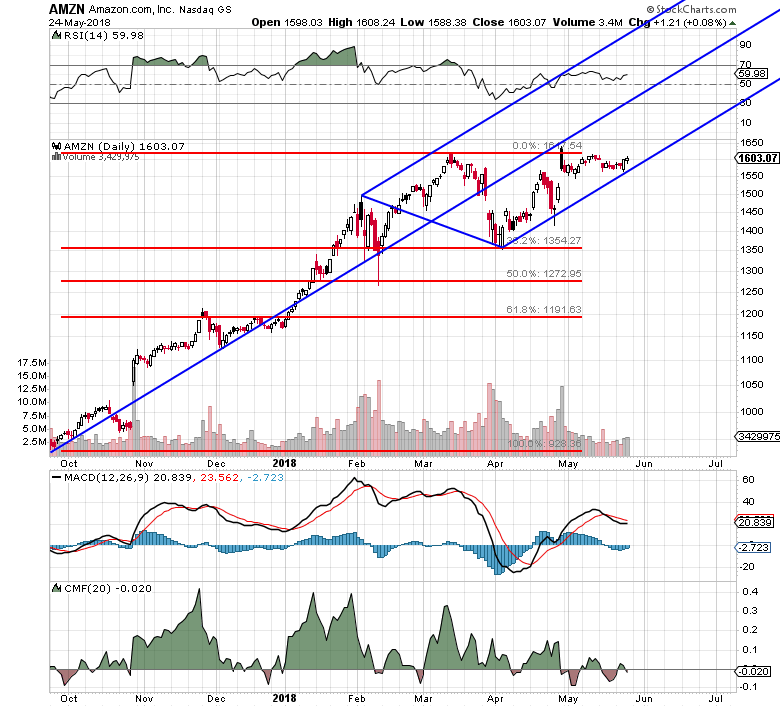 You'll immediately see two things on this chart, both suggest technical control of the name. For one, the share price strictly obeyed a 38.2% Fibonacci retracement of the September/October 2017 lows through the March 2018 highs. Secondly, as the shares recovered the price colored strictly within the lines painted by the lower chamber of the Pitchfork drawn along the trend provided by the same timeline. Fascinating. Understandable.

What this tells me is that the name looks to be at support as provided by the lower trend-line of said Pitchfork. Buy it here? Not so fast, tough guy. The share price has stalled here at this level repeatedly throughout the year, and this is simply too expensive a stock to make a mistake due to haste or a lack of due diligence. AMZN is trading at 80 times forward looking earnings you know.

Should a daily MACD that does look poised to recross in a bullish way today propel AMZN above the highs of the year, I would still need to see at least one successful defense of say... the 1615 level by the name before I could endorse an add here. Yes... I would rather give up a few points on purchase price to gain some certainty rather than to buy the shares this close to resistance with no idea if that ceiling will crack.

I am not playing this one along with you. I am long some equity, and though I am often willing to make a sale in the options space in order to raise revenue, names like this pay outsized premiums for options trades simply because they do carry with them extra-ordinary risk. You have been warned.

Amazon will report their Q2 numbers on July 25th. As of last night, July 20th $1350 puts were still paying $4.17. Does $417 bucks for nothing seem like easy money? It might, unless the name stumbles into those earnings. Then you'll chew your fingernails off, and you better have $135 grand at the ready. Not an acceptable risk for your average home-gamer. Depends on your version of tolerance for risk. The July 20 $1200's still last paid $1.25.

(Raytheon and Amazon are holdings in Jim Cramer's Action Alerts PLUS member club. Want to be alerted before Jim Cramer buys or sells RTN or AMZN? Learn more now.)

Get an email alert each time I write an article for Real Money. Click the "+Follow" next to my byline to this article.
TAGS: Investing | U.S. Equity | Technology | China | Markets | Economy | E-Commerce | Politics | Stocks