Luxury homebuilder Toll Brothers (TOL)  plunged some 8.6% in a single session earlier this week on disappointing earnings results, but has since clawed back somewhat and even rose 1.8% on Friday. Are we headed back down to the basement, or is the stock set to build up some positive momentum? Let's check the charts.

TOL's technical pattern looked positive the last time I checked the stock out in May 2017. In fact, its price went up and up until January, when a reversal hit. In this daily bar chart, we can see that the stock topped out around $52 a share in January, but quickly declined to around $44 by early February:

TOL broke below its 50-day moving average line (the gold line in the top panel above) with that move, but temporarily stopped short of its rising 200-day moving average (the blue line in the top panel). However, the stock later broke below the 200-day average as well in late March. Subsequent rallies to the 200-DMA's underside have failed so far, and we also got a bearish "death cross" in late April when the 50-day average crossed below the 200-day line.

In fact, just about the only thing that doesn't fit this bearish picture is Toll's On-Balance-Volume line (OBV), which has been steady or neutral all year. The OBV line actually moved up a little this month, suggesting that buyers have entered the scene recently. However, the Moving Average Convergence Divergence oscillator (MACD) just failed at the zero line's underside.

This weekly bar chart definitely has a bearish feeling as well, as it shows that Toll has fallen below its 40-week moving-average line, denoted in gold below:

The weekly OBV line also shows a sharp decline in the past five or six months, which makes it much more bearish than the daily OBV line is. Additionally, the weekly MACD oscillator just moved below the zero line on this time frame for an outright "Sell" signal.

This point-and-figure chart indicates a $35.84 downside price target for Toll vs. the $40.78 that the stock closed at on Friday. That would mean that much of TOL's 2017 advance will get reversed: 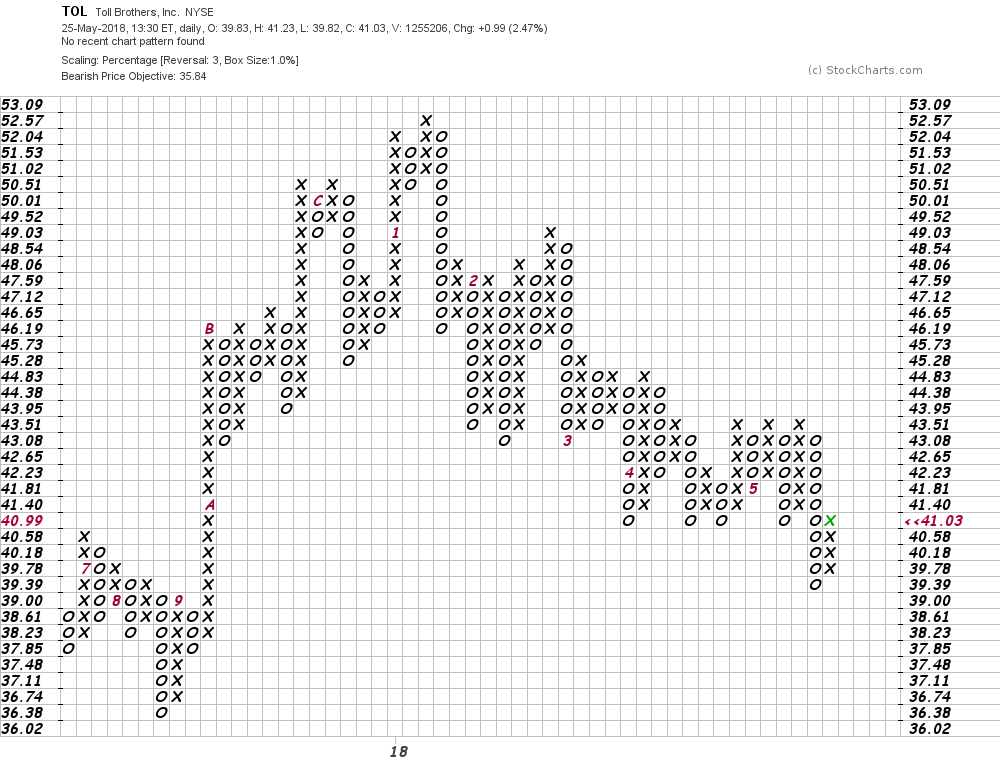 Have higher U.S. mortgage rates kicked in enough to hurt Toll? Are the stock's best days behind it?

I have no idea what's driving Toll's fundamentals, but the stock's charts are bearish and TOL has generated a number of sell signals. I wouldn't expect a bidding war for the shares to start any time soon.

Get an email alert each time I write an article for Real Money. Click the "+Follow" next to my byline to this article.
TAGS: Investing | U.S. Equity | Basic Materials | Economy | Stocks