Colgate-Palmolive (CL) was checked over back in February, and I wrote that, "the divergences between the price action and the OBV line are subtle but they suggest that CL has more upside than downside risk at this moment. Aggressive traders could probe the long side risking a close below $68." Prices held steady from February into March and bounced slightly in April; however, in late April CL tumbled sharply to new lows for the move down.

Is the downside exhausted or is there more risk ahead? Let's visit with the charts again.

In the daily bar chart of CL, below, we can see that prices were stable in February and March but rapidly fell apart in April. CL failed at the underside of the declining 200-day moving average line. There was a gap to the downside and Cl closed below the declining 50-day moving average line. One day later and prices had broken the February and March lows. Prices have continued lower into May and again we see some small green shoots around the $62 area.

The daily On-Balance-Volume (OBV) line has inched up and the Moving Average Convergence Divergence (MACD) oscillator has crossed to the upside for a cover shorts buy signal.

In this weekly bar chart of CL, below, we do not have much in the way of encouragement to become a buyer. Prices have broken the early 2017 lows. CL is below the declining 40-week moving average line. The weekly OBV line looks very weak as does the MACD oscillator on this time frame.

In this Point and Figure chart of CL, below, we can see the recent slide in April (look for the "4" on the chart) and a potential downside price target of $52.01. 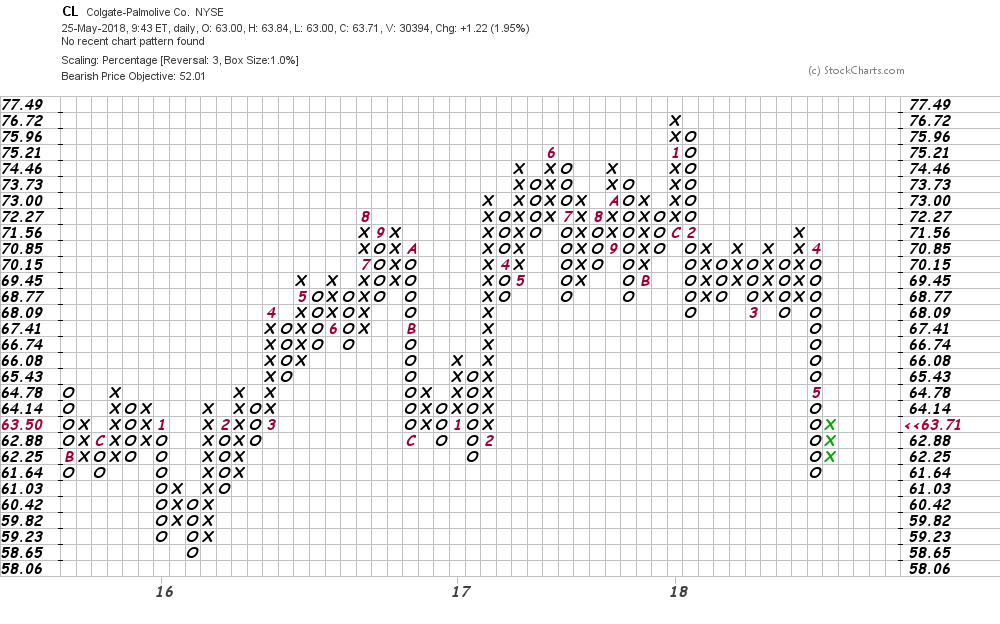 Bottom line: CL is on shaky ground after breaking the lows of early 2017. Without signs of aggressive buying I fear that CL could slide still lower. We have a Point and Figure price target of $52 but that might be too bearish.

(For more on CL, see Jim Cramer's We Have Some Strong Opportunities to Make Some Money Here.)