Hewlett Packard Enterprise (HPE) has a relatively short trading history, but we can still draw some conclusions and make a technical forecast. Let's dig into the charts and indicators this morning and see what we can glean.

In this daily bar chart of HPE, above, we can see that prices have been moving from the lower left to the upper right -- in other words, an uptrend. HPE is above the rising 50-day moving average line and the rising 200-day moving average line. The 200-day average was successfully tested in March. From November through late April, HPE was in a sideways consolidation pattern bounded by $16.50 and $18.50. Prices broke out on the upside from this "rectangle" at the end of April and recently retested the top of the pattern.

The daily On-Balance-Volume (OBV) line has followed the same path as prices -- rising from last May to September then turning neutral and rising again from March. One indicator to keep an eye on is the momentum study, which now shows a small bearish divergence to the price action in April and May. As prices have risen these past two months, the pace of the rally has slowed.

In this weekly bar chart of HPE, above, we can see that the 40-week moving average line has a positive slope. The weekly OBV line has risen with the price action and tells us that buyers of HPE have been more aggressive. In the lower panel we can see a fresh crossover buy signal from the Moving Average Convergence Divergence (MACD) oscillator. 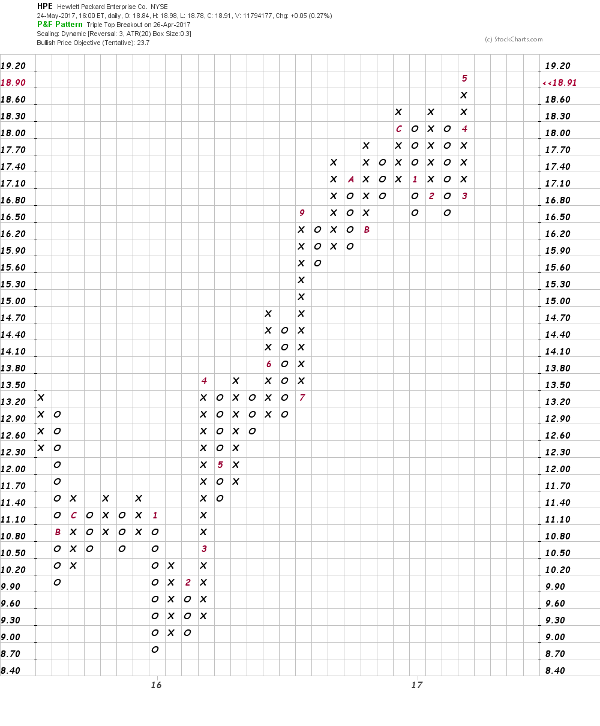 In this Point and Figure chart of HPE, above, we can see how prices broke out at $18.60. The measurement or count from the consolidation pattern gives us a potential price target of $23.70.

Bottom line: HPE looks like it is heading higher. Longs should risk a close below $18.00 looking for gains to around $24.