Gee wiz. I mean there was little doubt that the Dodd-Frank Act of 2010 seriously injured community banking in the name of regulation. Given where the U.S. was economically at the time, the increased regulation was understandable. The fact is unfortunately that the business was driven toward banking giants, and forced smaller, or regional banks into a less competitive position. The House of Representatives this week passed the Economic Growth, Regulatory Relief and Consumer Protection Act by a count of 258 to 159. The bill, which started out in bipartisan fashion in the Senate, now heads to President Trump's desk for passage.

What this bill does is relax some of the most overbearing regulations for smaller institutions. Most notably raising the asset threshold that banks are subject to from $50 billion to $250 billion over the next year and a half. This will reduce the number of banks designated as systemically "too big to fail" (those facing the harshest restrictions, and most regulation) from the current 38 institutions down to 12. What is immediate will be a bump from that $50 billion level up to $100 billion. That should provide "right now" relief to such firms as Comerica (CMA) and Zions Bancorporation (ZION) , meaning these banks will no longer be forced to submit to the Fed's whole "Stress Test" procedure. At the higher level, which is still 18 months out once the president signs the document, even such banks as SunTrust Banks (STI) , and Fifth Third Bancorp (FITB) will see such relief.

Was relief necessary? According to the Wall Street Journal, the three largest banks, JPMorgan Chase (JPM) , Wells Fargo (WFC) , and Bank of America (BAC) now hold 32% of all deposits, which is an increase from a mere 20% in 2007. On top of that, in the last year alone, 45% of all new checking accounts were opened at one of those three banks, and since 2009, 137 community banks closed just in the state of California alone. Really Incredible. Dodd-Frank, while well meaning, really ended up favoring banks with the most resources to begin with, and in the end, discouraged competition.

Bear in mind, that this new bill, if signed by the president, relieves no banks that are subject to the restrictions place upon proprietary trading imposed by the "Volcker Rule." That rule, part of Dodd-Frank, bans speculative trading at taxpayer-insured banks, and is likely to see some easing as well. Perhaps the assumption that positions held by banks for less than 60 days be classified as speculative, and thus prohibited might be relaxed. The Federal Reserve will vote on what has become known as "Volcker 2.0" on May 30, which is next Wednesday, kids.

Diamond in the Rough?

Looking for an inexpensive way to play this? I know that I am. Banks were hurt on Wednesday by the collapsing of the 2-year/ 10-year Treasury yield curve on the perceived dovish-ness of the Fed minutes compiled at the central bank's May policy meeting. Still, year to date, the KBW Nasdaq Regional Banking Index (KRX) is up roughly 8%, while the broader KBW Bank Index (BKX) has rallied only 3%. One might say that the legislative moves toward less regulation have already been priced in by the market. One stock does catch my attention.

Have you taken a recent look at PacWest Bancorp (PACW) , a California survivor? Priced at 13 times forward-looking earnings, the name is not insanely overvalued, in my opinion, versus the bigger banks. The 4.4% dividend yield certainly attracts my attention, and the bank shows significant trends for growth over a three-year timeline, both for earnings and sales (something I always look at). 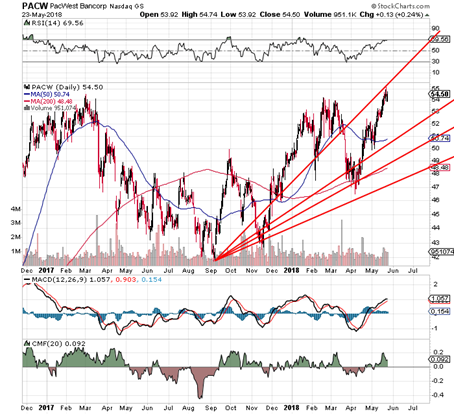 One can plainly see in the chart above that PacWest is in place for a potential breakout. The shares have retaken the highs of both early 2017, and early 2018. Relative Strength is apparent as well. So is the improved Money Flow. The only fear here would be that the rally in this name might be tired -- that at this point the risk might be to the downside. If the benefits of deregulation are indeed priced in, then this would be the fact.

I'll tell you what I think. I think that I would like to initiate with a small long. Heck, this could be the high. I don't want to go nuts. PACW reports on July 16. Support at $50 is implied at the second level of this Fan model by mid-July should the current trend stay unbroken. A lot to ask. If you want a sure thing, try the lottery. The July 20 $50 puts went out last night with a $0.50 bid. I will likely make the equity purchase only if the bid is there this morning for these puts.

That is where I find the risk acceptable to initiate the trade. Cut the basis by half a buck while exposing myself to equity risk at a discount -- a discount that at least on the charts looks somewhat attractive.

Cards and letters from people I don't even know. OK, maybe it was more like an email and a couple of tweets. I basically told you in Wednesday's column not to touch General Electric (GE) with a 10-foot pole -- or at least that I would not. The stock was simply obliterated in the Wednesday session. I did tell you ahead of time that the Electrical Products Group Conference in Florida was a serious risk. Why would I lie to you?

Still, almost incredibly, by days end, the questions came in. The gist: "Now, after a 7.26% decline (Worst day for GE in nine years, and they've had their share of bad days.), was the stock okay here?" Amazing. Listen kids, if you need to take a shot here, that is your prerogative. You're not pinning this on me.

GE has re-affirmed full-year guidance of $1.00 to $1.07, as well as free cash flow generation of $6 billion to $7 billion. That is positive. However, the firm expects profits at Baker Hughes (BHGE) to rise by at least 50%. That may be realistic, but should for any reason we see energy prices stall, or decline, that feather in the cap does not look nearly as pretty. There was plenty of bad news, too.

CEO John Flannery admitted that there will likely be no profit growth for the power business this year. That made headlines. Then the headlines got worse. Flannery was asked about the sustainability of the dividend: "It's ultimately a function of the free cash flow of the company and that's ultimately a function of operating performance and things we do with the portfolio." Huh? Nice try, Slick. I have done this once or twice myself on television. When asked a question that one does not want to answer, simply use a lot of words, and do anything but give specifics. The markets obviously saw right through this, and GE closed at the lows on a day that saw equity markets rally late in the session.

Dust in the Wind

Do not invest in General Electric for the 3.4% dividend yield. The stock may rally this morning. That would be technical in nature. You might profit from a rental position here or there. If you feel the need to take a speculative shot here, I would suggest something along the lines of a purchase of September $16 calls. Right now, they are trading roughly for a song (about $0.32), which should tell you something. Why risk fourteen bucks, and tie up the capital when you could simply throw away a Friday night at your favorite fast food joint for a family of four instead?

Get an email alert each time I write an article for Real Money. Click the "+Follow" next to my byline to this article.
TAGS: Investing | U.S. Equity | Regulation | Markets | Financial Services | Dividends | How-to | Newsletter | Options | Politics