Just yesterday, I told you that the markets engines were starting to rev. Oh yeah... Vroom. That came after a Friday column where I told the world that I started seeing the short term future of the marketplace through rose colored glasses. Funny thing happened on the road to victory. That funny thing is known as the 24 hour news cycle. There is still reason for some optimism, however, we must never lose sight of the fact that daily, and overnight moves are no longer driven by human decision making. Short-term direction, and therefore hour by hour momentum are determined by algorithms that scan the broad news cycle for key words. This forces the human decision maker to become far more strategic, and far less tactical in nature. In other words, your best defense against markets that twist and turn in undesirable ways, is to simply know what you are trying to accomplish. You are not in love with your stocks. Got it? That pretty face sleeping on the pillow next to you? You can love that. For every name in which you have interest, there is a level where you like it, and a level where you do not. Simple.

Must have been about 30 years ago. I was ocean swimming off the coast of Cocoa Beach, Florida. I was alone, or at least I thought I was. I had some company. The first one hit me directly in the guts. Must have been driftwood, right? Tread water. Look around. No wood. That's odd. Got back to swimming. Noticed a surfer dude making a bee-line for the shore, shouting something unintelligible at me. Funny guy.

Second one knocked the living daylights out of me. This time I saw it. A dull shade of brownish gray. I couldn't believe my eyes. Lemon shark. About my size. Uh oh, make that lemon sharks as in plural. Only this moron gets himself into these stupid situations. Most people go for a bike ride. They watch TV or play video games. This moron always finds a way to test fate. Well, the moron followed the surfer dude in, without being hit a third time. Undeniably scary.

President Trump made some noise yesterday. That's not unusual. This time he warned that the June 12th summit with North Korean leader Kim Jong Un could fall by the wayside should North Korea not come into the meeting well prepared to make positive change. The president put the odds of this summit coming off at just around 50/50. You could feel Mr. Market grind to a halt. On top of that, the US president also indicated a level of dissatisfaction with the progress made on trade talks with China. Equity markets turned into the wind with about 90 minutes left in the regular session but it had become too windy for launch.

This morning, both eurozone, and specifically German flash PMIs missed expectations badly for both the service and manufacturing sectors of those economies. Synchronized global growth once again comes into question. Once again, the ECB's ability or actual intent to even try to normalize monetary policy appears more and more like Ahab's unrealistic pursuit of the white whale. This data was released at 3:30 am, which is precisely when the euro fell out of bed, and the US dollar strengthened. This also happens to be when that second shark hit US equity index futures markets, forcing them to levels well below fair value. You can add on top of this April CPI data for the UK that also missed expectations, but that in the greater scheme really amounted to little more than Billy Budd's increased stammering when accused of mutiny. The stage had already been set.

Penney For Your Thoughts

I know that you thought of buying some J.C. Penney (JCP) yesterday. Don't lie to yourself. Every sentient brain out there thought to his or herself that at these levels, this might just be a vehicle for some controlled speculation. I know that because that's what went through my mind. Last Thursday, JCP reported a first quarter that missed EPS expectations by a couple of pennies. Worse than that, the firm guided full year profit (profit?) down to a range of $-0.07 to $0.13 from the previous guidance of $0.05 to $0.25. The stock traded around 3.10 in the Wednesday/Thursday overnight session. The stock traded as low as 2.28 on Tuesday.

What happened in the interim was the announcement of CEO Marvin Ellison's intended departure for a similar role at Lowe's (LOW) , which means to me, that incredibly... despite simply awful results, people must respect Ellison, and must think that he did about as good a job at Penney as could be done. What does that say about Penney? Sometimes it really is not leadership's fault. Hue Jackson did keep his job in Cleveland.

That said, though prior to joining JCP, Ellison had served in operations at The Home Depot (HD) from 2002 through 2014, running that firm's US stores. Perhaps this man was simply the wrong choice for a national department store chain reliant upon apparel, which is much more susceptible to the ever growing pressures of e-commerce than would be the world of sump pumps, lumber, packaged cement, and gardening supplies.

My Thoughts On JCP

If you wish to speculate on this name, be my guest. You can certainly control the risk, by simply forgetting about the position. My feeling is that any sustained rebound will be tough to come by. JC Penney trades at 10.2 times forward looking earnings. Macy's (M) at 10.3 times. That's where the comparison stops. Macy's pays you a 4.6% dividend yield, while JCP can not pay you. Macy's runs with an Operating Margin of 3.8%. Nothing to write home about. JCP? -0.3%. In fact, when it comes to levered free cash flow, J.C. Penny sports a number ($186.1M) over the trailing 12 months that is little over 17% of what Macy's can boast (which in turn is about 6.3% of what Walmart (WMT)  can boast of). Bottom line is that this name is purely speculative from an investor's point of view. The best chance for a short-term pop in market cap would be the naming of someone with a recent history of turnaround success at a department store. They need to hire someone from Macy's.

The year was 1974. It was August. Twenty-five year old Frenchman Philippe Petit would walk across a tightrope stretched across the twin towers of the brand new World Trade Center in New York. No fear. Petit would not fall from the rope on that day, or on any other for that matter. Within a year, and half a world away though... Saigon would fall, without US combat troops present to support the ill-fated regime. The city would fall quite decisively in fact.

JP Morgan analyst Steven Tusa continues to expect General Electric (GE) to fall in value, despite the recent pop in the share price that has propelled the name to levels above $15 on the back of plans to merge GE's transportation unit with Wabtec (WAB) in a $11.1B deal. This deal is expected to provide GE with $2.9B in much needed cash upon closing. In Tusa's view, General Electric needs an approximate $32B just to get debt to earnings ratios down to more comfortable levels.

Dividend? GE still pays a dividend yielding 3.1% despite slashing the payout last year. Tusa has an opinion here too. He feels that the "Current dividend payout ratio remains too high for the company to deleverage over time simply from running it's business." With that said, Steven Tusa reaffirms his "Underweight" rating on General Electric, as well as his 2018 price target of $11.

My Thoughts On GE

Most of you know that I fought a long battle with a net long equity position with GE for most of 2017 into 2018. It took every skill I had, and as well as some out-sized risk taking ( I got run over twice) just to get my net basis down to where I could get out with my tail in one piece. I took leave of this name at 14.85 in late April after quarterly earnings hit the tape. The name required far too much of my time and energy just to protect me from myself.

CEO John Flannery seems to me to be an earnest guy. I do trust him to, if not turn GE around, to be the best leader available who is also willing to try. He speaks today at the last day of the Electrical Products Group investor conference in Longboat Key, Florida. Will he say anything of importance? That much is unknown, but chances are likely that the stock moves at some point today, and now you know why. My belief is that the stock price is at a crossroads. 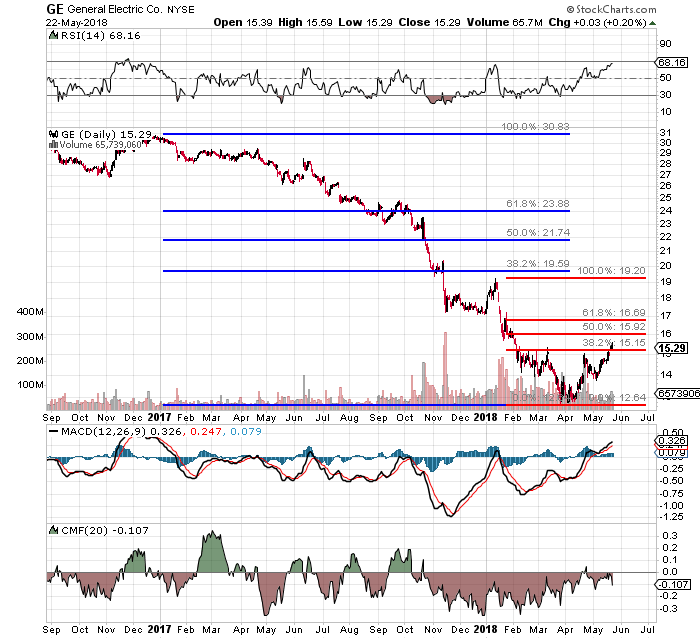 On an 18 month chart, GE would appear to have room to run, however, running a static 2018 Fibonacci model (red Fibs) would suggest that the recent pop might already be out of gas unless there is some unexpected cash generation that I do not see about to hit the news cycle.

I am not interested in reacquainting myself with this name. I feel that the stock's recent success has as much to do with surging oil prices as any Wabtec deal. Personally, I would not consider the sale of any puts or calls with strike prices inside of a range of 11/19, or sporting expiration dates further out than two months. There is simply almost no premium to be paid for options contracts that fit my criteria. Therefore, I will find another way to risk losing my hard earned dough.

Get an email alert each time I write an article for Real Money. Click the "+Follow" next to my byline to this article.
TAGS: Economy | E-Commerce | Stocks | Investing | U.S. Equity | Basic Materials | Consumer Discretionary | Markets | Consumer