When I look at the charts of Weibo (WB) I see three reasons to take profits.

Weibo has had a big rise the past two years. It had an 18-month base pattern from around $20 so it has been a "four bagger" plus it broke out from a large ascending triangle pattern which can mean that prices only had another 25% on the upside. In addition WB reached its upside target from a Point and Figure chart. Let's take each of these signals separately.

In this daily chart of WB, below, we can see that prices traded sideways in what could be called an ascending triangle formation. I learned from my teacher, Ralph Acampora, CMT, that large triangles many times come late in an advance. Typically, 75% of the entire move has been seen leaving only another 25%. The last surge up to $80 on WB may have been that last 25%. The moving average lines are still bullish as is the On-Balance-Volume (OBV) line and the MACD oscillator, but these indicators don't anticipate turns.

In this weekly bar chart of WB, below, our indicators are doing the right thing but prices have gone up four fold from the base. If you bought WB at $20 or better you are very pleased with the result.

In this last chart of WB, the Point and Figure count or price target measured to $64 or so. Clearly WB has overshot its price target. 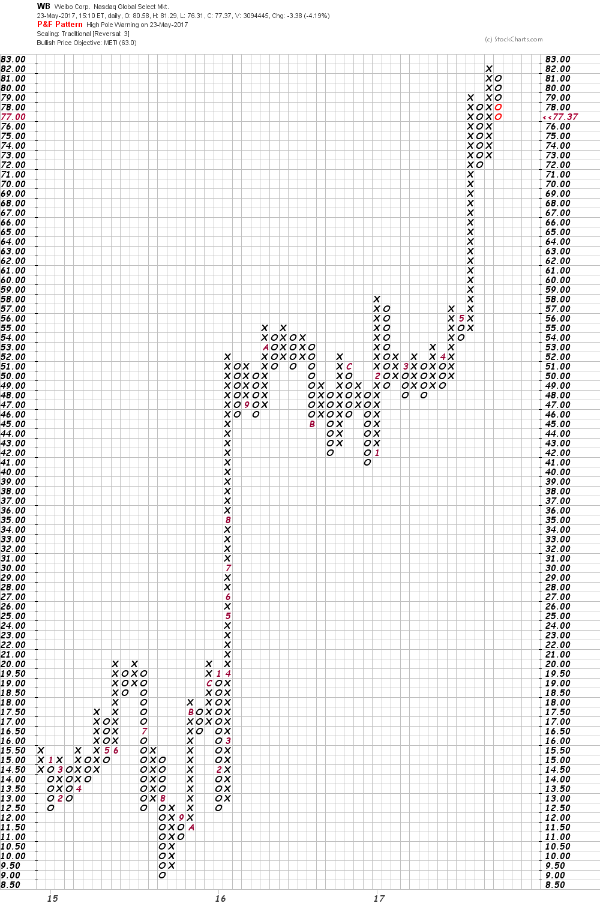 Bottom line -- you are old enough to make your own decisions but for money I would take it and go.

Here's My Plan to Trade DocuSign and It's Nothing Very Complex

I'm willing to expose myself to a limited level of downside equity risk and get paid to do it.

CrowdStrike Stock Has Touched $100: What Investors Should Do Now

Let's see if anything has changed significantly after CRWD reached our first price target.