The failure, at some stage or another, of talks on Greece's bailout has become something so ordinary that it is hardly news. Yet investors still should follow this latest twist in the Greek debt odyssey because it may contain opportunities to snap up bargain eurozone assets.

There is no doubt that the single European currency area as a whole is doing much better now than last year. Gross domestic product advanced at a faster pace in the eurozone than in the U.S. or U.K., the usual big champions of growth in the developed world. PMI data for May released on Tuesday showed activity holding at six-year highs.

Unemployment is falling and the bad debts that have plagued the European banking system for so long slowly are shrinking with the help of the European Central Bank's quantitative easing and negative interest rates.

Things are better everywhere, except for Greece. The country's parliament last week passed new austerity measures in the form of tax increases and pension cuts to ensure its creditors agree to release a tranche of around €7.5 billion ($8.4 billion) of the bailout.

Greece needs this money to pay back some of its debt falling due in July. Greek Finance Minister Euclid Tsakalotos (pictured with ECB president Mario Draghi on the right) also hoped that an agreement on debt relief would pave the way for the country's inclusion in the ECB's quantitative easing program. If the ECB were to buy Greek bonds, yields would fall, making the debt burden easier to bear. 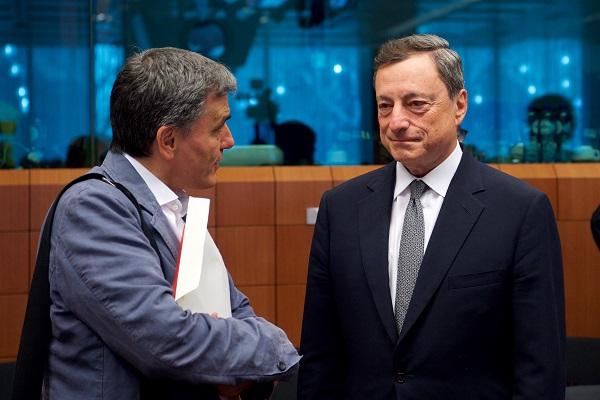 Total debt is expected to peak at around 179% of Greek GDP this year, the highest level in the eurozone. The country's European creditors could not agree with the International Monetary Fund (IMF) over how to offer it debt relief.

Essentially, the IMF wants the Europeans to flesh out a promise they made a year ago that they would forgive some of Greece's debt. The eurozone creditors promised in May last year to extend maturities and grace periods on Greek loans so that the country's gross financing needs will be below 15% of GDP after 2018 for the medium term and below 20% of GDP later.

According to reports following yesterday's Eurogroup meeting, the IMF now wants them to say exactly by how much these maturities and grace periods could be extended, and this is a level of detail to which the European creditors are uneasy to commit.

It sounds like a technicality, but it has the potential to cause volatility in the markets. France would like to see the debt relief measures in place, but the engine of the eurozone, Germany, is not so keen. And with general elections due in September, it is hard to see Angela Merkel's conservatives giving a lot of ground on this issue.

This is where the opportunities lie for investors. European, and especially Eurozone, assets, have been snapped up rapidly since the victory of centrist Emmanuel Macron in the first round of the presidential election in France at the end of April. After the second round of the election, when Macron defeated extremist leader Marine Le Pen, European equity funds saw their largest-ever inflows, totaling $6.1 billion.

And eurozone assets are appreciating fast. For instance, the iShares MSCI Eurozone ETF (EZU) , a recent addition to the Action Alerts PLUS portfolio that Jim Cramer co-manages as a charitable trust, is up nearly 13.4% year to date.

The dispute over Greek debt relief could cause temporary pullbacks in European assets, which investors could use as entry points.

Besides EZU, there are other ETFs that offer exposure to European assets to U.S. investors. For those seeking to play the foreign exchange game, the CurrencyShares Euro ETF (FXE) tracks the euro's exchange rate and is very liquid. Some people believe the ECB's quantitative easing program will need to be wound down sooner than markets expect, which would lead to sharp appreciation of the euro.

Even if this is unlikely, because Draghi has time and again come out and defended the central bank's asset purchases, the euro still could strengthen versus the dollar just because the U.S. tax stimulus promised by President Trump is not advancing as fast as investors hope.

For more adventurous investors, European small-caps might be a place to look for bargains. These are more volatile and likely to fall first when uncertainty hits.

The WisdomTree Europe SmallCap Dividend Fund (DFE) tracks an index of small-cap European companies that pay dividends, weighted by the amount of dividends paid over the past calendar year. Year to date, it is up by more than 15%. One caveat is that it is heavily exposed to the U.K., with more than 25% exposure, and Sweden, with more than 14%, so it is not an ETF focused on the eurozone.

Finally, for those believing in a happy ending to the Greek debt odyssey over the long term, there is the Global X MSCI Greece ETF (GREK) , which tracks a market-cap weighted index of around 15 Greek companies. It is up about 10% year to date.

The Greek debt crisis has dragged on for years, almost becoming part of the European political landscape. Its resolution is not easy, but it is likely that politicians will come up with another compromise to keep the country afloat. After so much time and so many sacrifices on all sides, it would be a waste to do otherwise.

Planning to be in New York on Tuesday, June 13? You're invited to join us for an evening of cocktails and conversation with three dynamic young CEOs whose companies have found big news audiences and good markets. How have they done it? What have they learned? Meet Chris Altchek, CEO and co-founder of Mic; Shafqat Islam, co-founder and CEO of NewsCred; and Kathryn Minshew, the CEO and co-founder of TheMuse. Our panel discussion will be led by Ken Doctor, media analyst and columnist for TheStreet. The event, from 6 to 8 p.m. is free, but space is limited and reservations are required. Please click here to RSVP and get more information.