The broader equity market, defined in this space as the S&P 500, had a nice day on Monday. The index ran some 20 points, good enough for an increase of 0.74%. All 11 sectors made like the Irish strolling down 5th Avenue on St. Patrick's Day, and proudly bore the color green for the day.

Sectors that outperformed that broader marketplace? Oh, really it was Energy, Industrials, Information Technology and the Financials that strutted their stuff. In other words, there seems to be a renewed confidence underpinning this movement. A growth-inspired confidence, one that no longer fears restraints on international trade.

You might recall last Friday's Market Recon column. I explained to you there why I was turning a bit more bullish, at least in the short term. That was technical. Sure, Monday was about an apparent easing in the harsher direction that the U.S.-China trade relationship had been headed down, but the VWAP sellers failed to significantly dent the markets late in the game. I think the sustainability of the day's rally was really a product of the confidence shown by two key players in this U.S. administration.

First, after making the weekend news rounds, U.S. Treasury Secretary Steven Mnuchin showed up on CNBC. He explained that "both parties have agreed to suspend the tariffs." Mnuchin went on to talk about sustained 3% economic growth. Both were key, and still in traders' minds collectively when National Economic Council Director Larry Kudlow referred to ongoing trade negotiations with the Chinese government as a "growth document." I watched that interview in real time, and as soon as I heard those words "growth document," I said "Oh yeah." The algos liked it, too. A growth-inspired confidence? Make that an outperformance rally for cyclical -type names.

Happen to notice the transports? The Dow Jones Transportation Average had stalled just below 10,840 on three spikes since the now famous late-January puke-athon. All three times, for one reason or another, that index, which can sometimes be referred to as a measure of expectations for growth, had stopped dead in i's tracks. Like McClellan outside of Richmond. Monday's action? The transports smashed that level, and tested the spot from above on the close. The spot held.

Dow Theorists understand. Industrials and Transports breaking out together is an extremely positive signal. Not just in the short term either. Subject to headline risk? No doubt, we've been subject to headline risk since I was the only paperboy in my Queens elementary school with his own retail trading account. Point is the markets are revving their engines, and the signals are multiple. Cautious? Always. When the flag goes up and you hear the whistle, well you'll know what to do.

Oh, did I mention that the four top performers in the transports on Monday were Matson (MATX) , Avis (CAR) , United Continental (UAL) , and FedEx (FDX) . Hmm... Ocean transport, vehicle rental, an airline, and delivery services. A very well-rounded group that outperformed the broader market without a ton of help from the railroads. Encouraging. Rock and Roll. 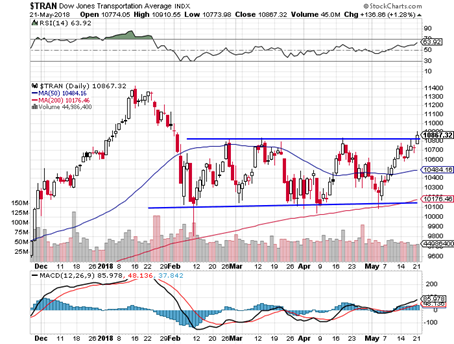 Setting the table? I wouldn't bet the farm against it. Oil is hot. What scores this up? Dollar strength could pull that trigger. Fortunately, the greenback is a bit soft this morning.

What's been hot all May? Well, yes, stocks in general thanks to a great earnings season and broadly improved corporate conditions going forward. What has led the equity markets? Energy and Tech. We've talked plenty on Energy. We have not really stayed focused on tech for a little while, so let's take a look.

Micron Technology (MU) . Up 3.9% on Monday. Up another 3.9% in the overnight. The firm held its annual investor and analyst meeting on Monday. Micron announced revenue for the third quarter would land in the $7.7 billion to $7.8 billion range, up from prior guidance of $7.2 billion to $7.6 billion. Micron's fiscal third quarter ends on May 31 by the way.

Later on Monday, Micron and Intel (INTC) announced that their co-developed QLC NAND flash memory is now available. This technology leverages a 64-layer structure. The firms also announced having made progress on a third generation, 96-tier 3D NAND structure.

Done now? No. There is still more? Yes, Veronica, not only is there a Santa Claus, but Micron has also announced authorization to repurchase $10 billion worth of common stock as part of a plan to return at least 50% of free cash flow to investors beginning in fiscal 2019. That's only a quarter away, gang.

Best of all, Micron even after the recent surge still trades at less than six times forward-looking earnings. You missed it at sub 5x? Sub 6x is still pretty darned cheap. Intel, also a Sarge fave, and also considered cheap, trades at twice that much in comparison. The premium there is the difference in valuation between the storage game, and autonomous driving, the data center, and artificial intelligence, all playing fields where Intel must compete with Action Alerts PLUS holding Nvidia (NVDA) , a much more highly valued stock in terms of P/E.

Oh, speaking of the data center, Adobe Systems (ADBE) also has been making some noise. The firm announced on Monday an agreement to purchase the privately held Magento Commerce for $1.68 billion. That deal is expected to close sometime in September, and is the very reason that traders put the smack-down on Magento's rival Shopify (SHOP) . Adobe also increased the size of its own repurchase plan to $8 billion through the year 2021, which is likely why the name outperformed fellow cloud players like salesforce.com (CRM) , and Oracle (ORCL) on the day. 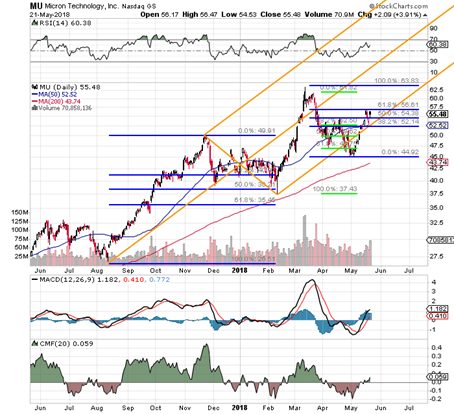 Plain as the nose on your face, you can see how important the $56.60 level is to MU. The stock closed at $55.49, and is trading at $58.10 in the overnight session. Should support be found Tuesday at that $56.60 level or above, a re-testing of the near $64 highs of early March becomes extremely likely, in my opinion.

My Thoughts on Tech

You guys know I like tech, and sometimes I can be overly partial to the space. The way I see it, the business, at least on the storage end, for the semis, remains cyclical, but within that cycle, the trough has less impact than ever before. Demand is strong, and will remain relatively strong, especially if the economy is growing, and if competition is increasing. The cloud or the data center might just be the fastest-growing segment of this business ever, and with the most room to run, not just domestically, but globally.

I trade the space, but I almost always have a broad net long position. Do the wafer manufacturers scare me? Well, they have not performed as I would have liked. Applied Materials (AMAT) put the hurt on that slice of the business last week with its downside third-quarter revenue guidance. That said, I remain long even that name.

How I think you trade these stocks is by maintaining a small-to medium-sized core position, and by trading the bulk of the shares based on momentum. Don't forget the tools at your disposal. If you read me, then you know that I like to sell puts with strike prices that I find attractive, but something as simple as writing covered calls can significantly lower an investor's net basis without exposing that same trader to any increase in principal risk.

Get an email alert each time I write an article for Real Money. Click the "+Follow" next to my byline to this article.
TAGS: Investing | U.S. Equity | Transportation | Industrials | Technology | Economic Data | Markets | Economy | Politics | How-to | Newsletter | Stocks | Options