Royal Dutch Shell Plc ADR A (RDS.A) has rallied to the $56 area and retreated a number of times over the past two years, but a pattern of higher lows since September points to a major upside breakout in the near future.

Let's check the charts and indicators to see if we need to be a buyer of RDS.A sooner than later.

In this updated daily chart of RDS.A, below, we can see a wide swinging chart but with a narrower and narrower range and with the same highs around $56. Notice the higher lows from September to November to March and April. Until May, traders who tried to use moving averages for their buy and sell signals were probably frustrated and relatively unsuccessful. In May the slope of the 50-day average and the 200-day moving average turned positive. The daily On-Balance-Volume (OBV) line turned upwards at the end of November and its rise for the past six months supports a bullish view on prices as traders of RDS.A have bee aggressive buyers. The trend-following Moving Average Convergence Divergence (MACD) oscillator turned bullish earlier this month as it moved above the zero line.

In this weekly bar chart of RDS.A, below, we can see that prices have stalled just above $55 on a number of occasions. Prices are above the flat to rising 40-week moving average line. The weekly OBV line just made a new high for the move up and this may be foreshadowing new price highs soon. The weekly MACD oscillator just crossed from above the zero line for a fresh outright go long signal. This chart also suggests that we could see prices rally to around $65.

In this Point and Figure chart of RDS.A, below, we can see that using this charting technique that prices have already broken out at $55.18. This chart also yields a price target of $65-$66. 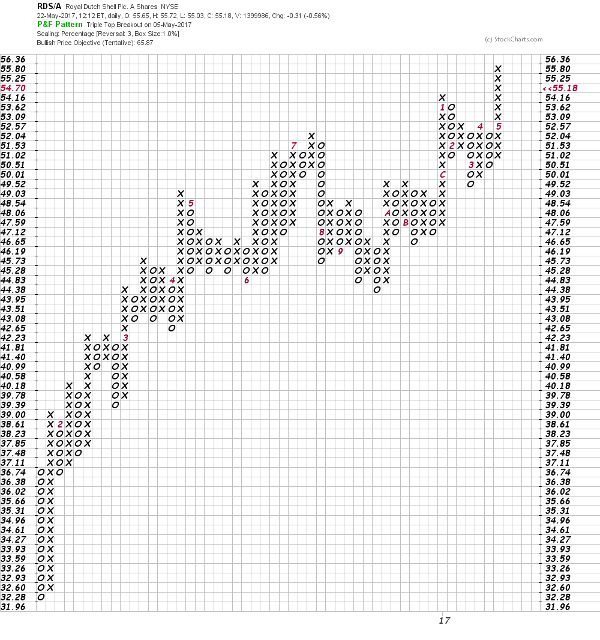 Bottom line -- depending on the chart you look at, RDS.A has broken out or is about to break out on the upside. Traders could go long here and/or on strength to $57 risking a close below $53 looking for gains to the mid-$60s.