The Trump administration had threatened to invoke tariffs on $150 billion of Chinese imports, with the initial tranche set to take effect next week. But now, markets have apparently taken solace (at least Monday morning) on Mnuchin's remarks. This might not be the $200 billion in U.S. goods that China had been rumored to have agreed to purchase, but it's positive news none the less.

What seems obvious that there is some framework being put together that will lead to a reduction in the US-China trade deficit. You might look for some money to flow back into the tech space Monday morning as a result, as investors in highly exposed areas such as semiconductors start to express some relief. In addition to the semis, Apple (AAPL) was the most active traded stock in the overnight (and moving in the right direction). I remain long Intel (INTC) , KLA-Tencor (KLAC) , Lam Research (LRCX) , Nvidia (NVDA) and other names in the space.

Keep in mind that the level of thought behind such overt market action has regressed in today's electronic age. Now, my fellow columnist Doug Kass often refers to "first-level thought" -- which is simplistic thinking about market-moving news. He argues that smart investors practice "second-level thought," or investing and trading based on something deeper than the obvious.

Personally, I always do my best to make darned sure that I'm not the "first-level thought" guy that Doug is talking about. But as algorithms feeding off of keywords churned out by the 24-hour news cycle increase in significance, compound intellectual thought is taking a less-prominent role in price discovery.

Instead, simple outcomes seem to be more predictable than ever. In other words, don't overthink this market -- because for now, you don't have to.

There are several catalysts for this. First, sanctions risks persist regarding Iranian output. Venezuela will also likely face U.S. sanctions in response to this weekend's suspect election results. In truth, Venezuela has already demonstrated that simple chaos has been enough to more than halve its production in a short time span.

Toss in ongoing production cuts that by the 13-member Organization of Petroleum Exporting Countries and 11 non-OPEC partners like Russia and you have the perfect recipe for turning a global supply glut into a possible oil shortage. The International Energy Agency has trimmed its demand-growth forecast going forward, but also announced that it sees rapidly rising consumption from where we were not too long ago.

More than a few analysts have brought up the prospect of a return to $100 oil. Crazy? I think not. After all, key exporter Saudi Arabia has an obvious interest in higher prices as it prepares to sell 5% of Saudi Aramco through an initial public offering at some point.

However, demand will likely continue to rise in large emerging economies like China and India -- and that's where I think Mnuchin and U.S. Commerce Secretary Wilbur Ross head with the Chinese. How can they cut the US-China trade deficit without upsetting too many apple carts? Simple: by selling U.S. oil to China.

America is now two-thirds self-sufficient on oil, but U.S. shale oil -- particularly from the the Permian Basin -- is notoriously bottle-necked. There's simply not enough pipeline or other transportation options to efficiently move the stuff.

We can remedy that by building new U.S. infrastructure that might be costly, but would greatly enhance job opportunities in the impacted communities. This is where I think answers will be found for the U.S.-Chinese trade deficit -- along with some potentially cheap investments for savvy market players. Oil-infrastructure names that I like here include Abraxas Petroleum (AXAS) , Apache Corp. (APA) , Diamondback Energy (FANG) , Sanchez Energy (SN) and Viper Energy Partners (VNOM) .

Buy Apple on the Arrival of iTunes Rival YouTube Music

Spotify (SPOT) and Apple currently boast roughly 125 million paying subscribers to their music-streaming services, and many see them as something of a duopoly in the space. But that will potentially change this Tuesday with the unveiling of YouTube Music by Alphabet (GOOG) , (GOOGL) .

This is actually Google's fourth attempt at gaining music-streaming market share via YouTube (the planet's largest video site). Is it "fourth time's the charm" here?

Well, Google intends to promote the launch with the most-expensive advertising campaign in YouTube history. There'll also be a free YouTube Music version supported by advertisers, as well as a higher-end subscription version that will start at $10 a month.

Morgan Stanley analysts predict YouTube Music will likely draw some 25 million paid subscribers by the year 2022, according to the Financial Times. If that's true, the new service will generate approximate $3 billion in new annual revenue for Alphabet.

I'm currently long GOOGL and SPOT, but sold my AAPL stake ahead of its recent earnings report. The YouTube Music news kind of makes me want to sell SPOT, but what I'd really like to do is initiate an Apple long precisely where I took my profits ahead of earnings. (Doesn't Jim Cramer often say something about owning this name and not trading it?)

Regular readers know that I sold AAPL at $176, as that was my price target for the name (and I thought at the time that I was pretty smart). I then made a few bucks on an Apple bull-call spread following the stock's post-earnings pop, which was nice, but still left me flat the name.

Well, here's how I intend to buy back my Apple shares at my price, or at least make some dough trying. Let's first look at AAPL's chart: 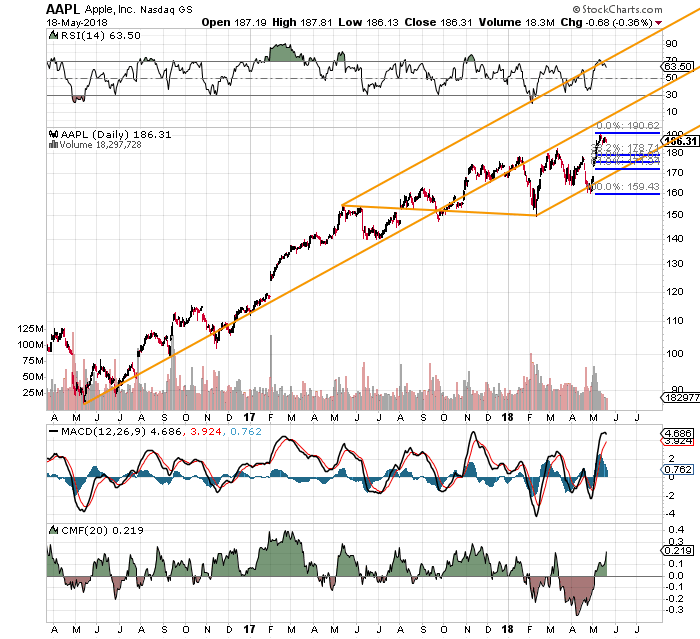 We can see that the pitchfork pattern's central trendline provided some recent resistance. We can also easily see that a 38.2% retracement of Apple's most recent surge lands the stock back in the $178 area vs. Friday's close at $186.31.

Now, AAPL is set to release fiscal-third-quarter earnings on July 30, and there's some premium value associated right now with options that expire just ahead of that. So, here's my plan:

That's a $173.03 net cost basis in the worst-case scenario on a stock that closed Friday at $186.31 (and is trading at $187.79 in the premarket as I write this Monday morning). Does that sound like a decent risk/reward proposition to you?

And of course, if the shares never come in, making $4.47 per contract for nothing is more than chump change.

Get an email alert each time I write an article for Real Money. Click the "+Follow" next to my byline to this article.
TAGS: Investing | U.S. Equity | Energy | Technology | China | Markets | How-to | Stocks