What do you do when a stock you own reports great earnings, yet goes down anyway?

If you're like most people you get angry. That's only natural. You took a risk, saw the desired report, but watched in horror as your account value shrunk.

Once that initial reaction subsides, though, you might start thinking, "If I liked it at $60, and the news was good, shouldn't I love, love, love it at $50?"

That scenario is what happened to me with both Norwegian Cruise Line Holdings (NCLH) and Tractor Supply (TSCO) this year.

Both companies posted all-time record EPS for 2017. Each is expected to reach even higher profits this year, suggesting their shares should be headed upwards, not lower.

Sure, the broad market peaked in late January but the S&P 500 never fell more than around 10%. By Apr. 13 TSCO had slumped by a bear-market-sized 28%. By May 7 Norwegian Cruise Lines had given back 18% from where it stood less than four months earlier. 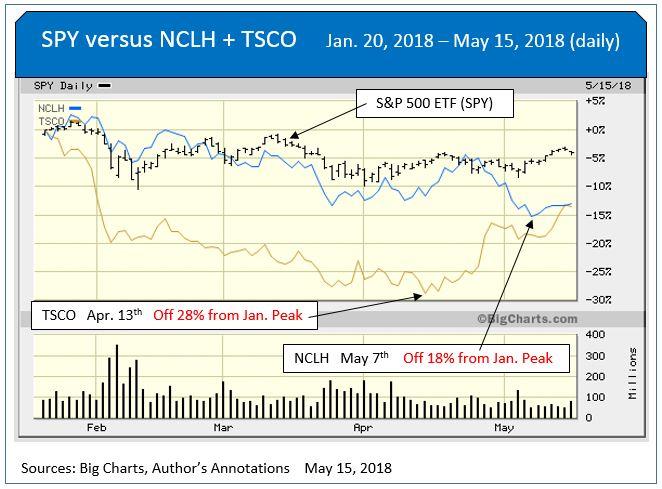 Were these "falling knives" to be avoided or were they gifts to be greedily accepted? The only way to know was to do the math. Once you've established a realistic target price, buy-hold-sell decisions become really simple. 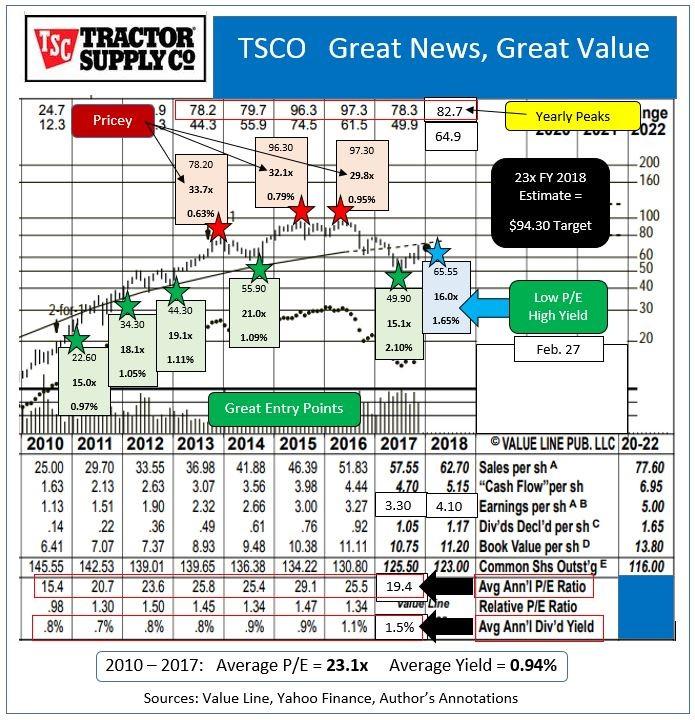 There were no EPS surprises when Q1 numbers were released yet the stock continued its fall. Knowing it was worth more than $90 per share gave me the courage to buy more. By the time TSCO started rising again, and raised its dividend by 14.8%, the stock had become my largest dollar holding. As of Wednesday, May 16 Tractor Supply had regained $71, up about 22% in just over a month.

My $90 to $100 one-year target price remains intact. I feel incredibly lucky to have gotten the chance to buy more TSCO for under $60.

NCLH had a great first quarter. It beat estimates and increased guidance for the full year. The firm's growth since coming public in 2013 has been more exciting than most market-darling tech stocks.

As of May 14 NCLH was offered at just 10.6x this year's estimate versus its 2014 through 2017 average multiple of 20.7x. My conservative year-end target only assumed an industry average 16 P/E yet showed me $77.60 was a very realistic goal. 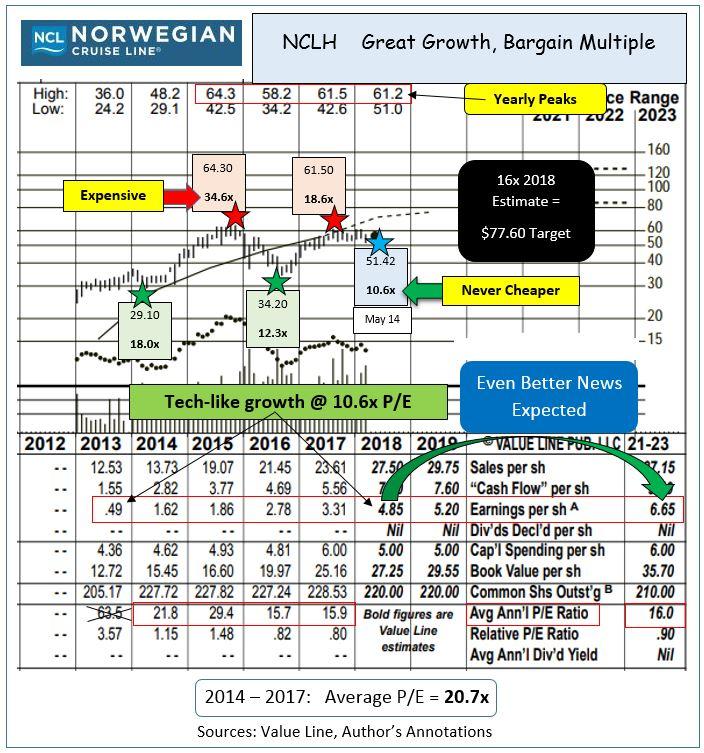 The Street's own Brian Sozzi interviewed Norwegian's CEO a few days ago. The man who knows NCLH best had nothing but good things to say about its prospects for 2018 and 2019.

NCLH picked up slightly over the past couple of days to $52.50. It remains severely undervalued. Traders can accept the market's verdict that the shares belong where they are, or they can grab the opportunity to buy cheap.

Worst-case break-even points dropped as low as $48.30 on Tuesday while offering up $1,170 per contract in maximum gain.

Why not take advantage of irrational markets rather than complain about them?

(This commentary originally appeared on Real Money Pro on May 18. Click here to learn about this dynamic market information service for active traders and to receive daily columns like this from Paul Price, Bret Jensen and others.)

Get an email alert each time I write an article for Real Money. Click the "+Follow" next to my byline to this article.
TAGS: Investing | U.S. Equity | Earnings | How-to | Markets | Options | Stocks