The American Society of Clinical Oncology conference -- the biggest event of the year for oncology firms and investors -- kicks off June 1 in Chicago, and scores of firms typically release abstracts right around now of studies that they'll be presenting at the event, which is known as "ASCO." that means a myriad of oncology names have either already moved or will soon do so on these reports.

Here's a quick synopsis of what to expect from this oncology "data bomb":

Loxo is poised for a second year in a row to be one of the ASCO conference's big winners. It presented promising data last year around its compound larotrectinib -- news that eventually parlayed its way into a $1.5 billion collaboration deal with Bayer.

This year, Loxo will report that an early stage Phase 1 trial involved a compound called LOXO-292 showed a 69% overall response rate among RET-positive patients with non-small-cell lung cancer and a type of thyroid cancer. Loxo soared 20% Thursday when the news hitting the wires.

Going in the other direction, Syndax Pharmaceuticals dropped some 25% Thursday on word of a disappointing midstage trial result around entinostat, its primary drug candidate. It looks like the company will only be able to move forward with a subset of the indication population for further trials.

However, a study of the same compound in combination with tecentriq to treat triple-negative breast cancer should be out in 2018's second half. Hopefully, that will show more encouraging results.

This is why I always want to have several "shots on goal" in within my small-cap developmental selections. After all, there's a very high failure rate in this space.

I'm neither selling or adding SNDX here, but will patiently await the data from that upcoming entinostat/tecentriq study.

The U.S. Food and Drug Administration has until late July to decide whether to approve Progenics' drug Azedra, and data released ahead of the conference should address some remaining concerns around this compound's use in treating two rare adrenal cancers.

I'm moving my probability of approval from 80% to 90% based on new data e. I also think there's a decent chance Azedra gets approved 30-45 days before its scheduled calendar date as well. 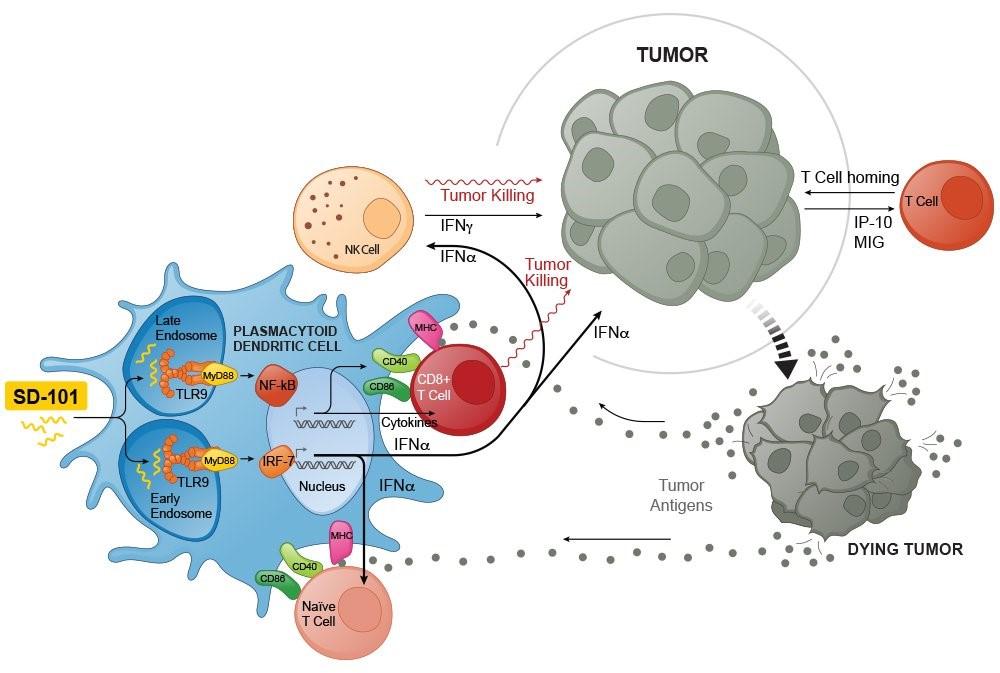 This stock declined almost 15% in trading Thursday after releasing midstage results for its compound SD-101 in combination with the blockbuster cancer drug Keytruda (pembrolizumab) from Merck (MRK)  .

The research found that the combination showed "only" a 60% overall response rate in PD-1-naive advanced melanoma patients. While this isn't in the 70% to 80% range some analysts would consider a "home run" and is lower than the previous 100% rate from an earlier study (with a much smaller population set), it's significantly better than the current standard of care. I added some exposure to this name late Thursday on this overreaction in the market.

(A longer version of this column originally appeared Friday on Real Money Pro, our premium site for active traders and Wall Street professionals. Click here to get great columns like this even earlier in the trading day.)