When I analyzed the indicators and charts of Macy's Inc. (M)   two months ago, I wrote, "The weekly chart of M looks like a respectable base but the daily chart shows a pullback. M could break out to the upside but weakness under $28 is going to retard any bullish move for a while."

The stock declined into late March and then continued its move higher toward the end of April. Recently M gapped higher nearly reaching $35 and the bottom of a resistance area from 2016. Let's check out the latest charts for a new strategy.

In the daily candlestick chart of M, below, we can see the rally going back to November. M is above the rising 50-day moving average line and the rising 200-day average. The daily On-Balance-Volume (OBV) line just made a new high for the move up to confirm the price advance. A rising OBV happens when buyers of a stock act more aggressively than the sellers.

In the lower panel is the 12-day price momentum study, which shows lower momentum highs from early March to now. Despite the gap the pace of the advance has slowed since early March.

In the weekly bar chart of M below, we can see that prices are above the rising 40-week moving average line. There is a band or zone of resistance in the $35-$45 area from late 2016 and M has rallied back to the underside of this area. This resistance zone may or may not stall the rally but it needs to be taken into account.

The weekly OBV line shows a nice up-move from November but it is interesting that it has not broke the November 2016 high yet. Breaking that high may be the clue for the next rally in M. In the lower panel is the 12-week price momentum study which shows slowing momentum since January.

In this Point and Figure chart of M, below, we can see a potential upside price target of $46.50. This target would suggest that the chart resistance could be overcome. 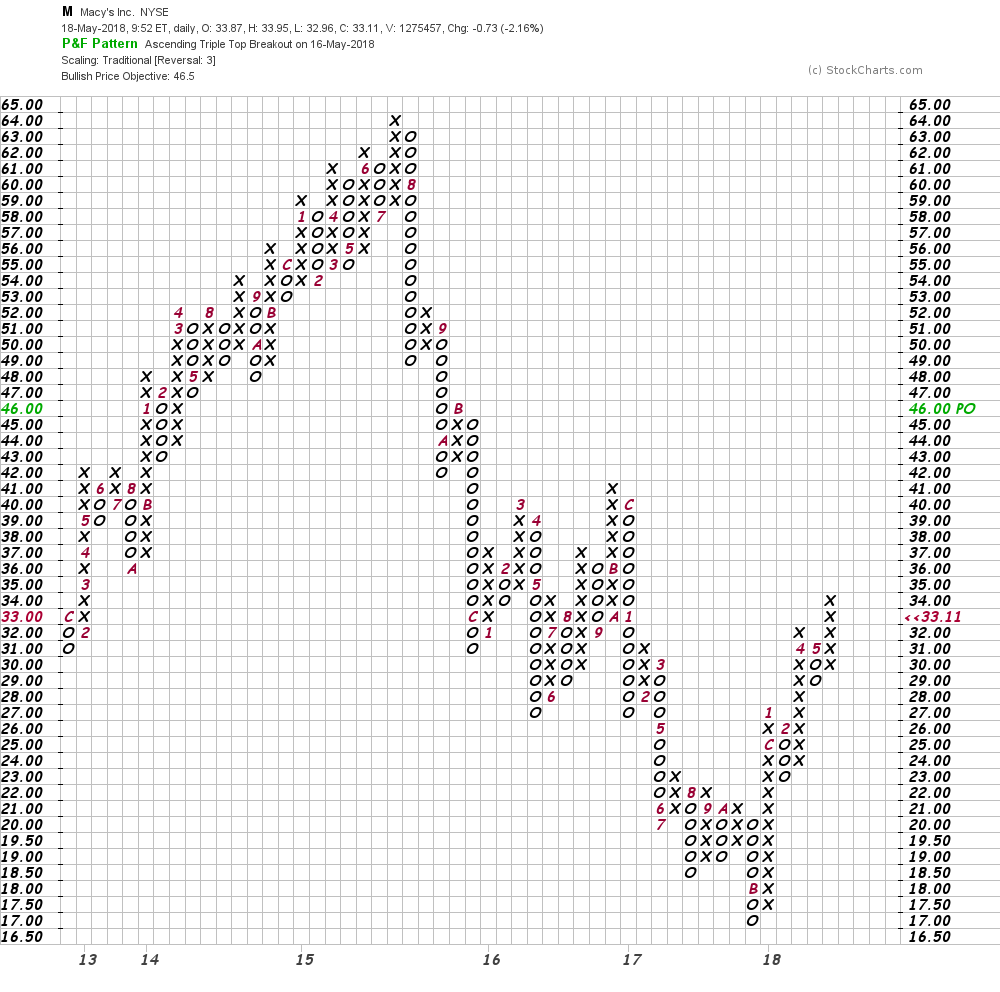 Bottom line: M has made a significant recovery from the November low. Prices have almost doubled. Because daily and weekly momentum has slowed I would look for a period of sideways trading between $35 and $30 until another upside attempt is mounted by the bulls.

Get an email alert each time I write an article for Real Money. Click the "+Follow" next to my byline to this article.
TAGS: Investing | U.S. Equity | Consumer Discretionary | Earnings