Last night, news broke, or we kind of thought it did. Emails and reports came in from scattered sources. Beijing had apparently proposed cutting China's trade surplus with the United States by $200 billion. The proposed package was to include some trade concessions, lowered tariffs on U.S. goods coupled with the increased import of such products. Boeing (BA) specifically was named as a potential beneficiary.

Within a few hours, these reports would be denied. No dice? Maybe. This all seems to be very murky. One related news story that appeared to be true was that as the U.S. and Chinese delegations tried to work on a deal, that China had dropped its anti-dumping probe into U.S. sorghum shipments. A positive, I think.

At the same time, President Donald Trump responded to increasingly harsh rhetoric from Pyongyang with some tough talk of his own, as the meeting between the president and North Korean leader Kim Jong Un scheduled for June 12 in Singapore hangs in the balance. That came after U.S. Trade Representative Robert Lighthizer simply stated "The NAFTA countries are nowhere close to a deal" the very same day that Canadian Prime Minister Justin Trudeau had implied that there was already a good deal on the table.

Headlines, both real and imagined. That's the 24-hour news cycle.

You, my friends, still trying to navigate your portfolios around all of that noise -- plus the current state of monetary and fiscal policies that have produced a stronger dollar on heightened expectations for rising interest rates -- while the market tries to successfully wind down what has been not just an excellent earnings season, but one "seasoned" with mostly optimistic guidance.

I speak to you often on discipline. I wrote in Thursday's column on how, while I do not expect markets to crash in our immediate front, that when that next haymaker lands on your face, it will likely come from a place of perceived safety, taking many by surprise due to the complexity of modern systems.

Part of playing defense is staying diversified to a degree that complements one's one tolerance for risk. This not only means spreading the wealth across sectors, but across asset classes. In times of crisis, hard assets might just hedge one's portfolio against both equity and debt instruments. Might. There are no sure things in our sport.

One thing not covered by my personal set of rules that I do occasionally lay out for those who ask, is the lining of my overall book with certain stocks that provide dividend income. Now, I am a trader, not someone who is very likely to "set it and forget it." What that means is that I already have a designated bond portfolio, I don't need to load my book with Utilities and REITs just to check a box. I want dividend payers competing in businesses that I am interested in and believe in.

These are several names that I am indeed long, and hold their place on my book for possibly several reasons, one of which is that they pay me to own the shares. Hard not to like someone who says "thank you." That's what a dividend is. A monetary acknowledgement of your equity stake.

I'm actually long these stocks myself. Do a lot of guys give you that?

1) Seagate Technology (STX) . Last sale: $59.02, Dividend yield: 4.26%. This firm is one of the three major manufacturers of hard drives. The stock had tended to trade very cyclically, ramping significantly higher earlier this year when the firm revealed that it had invested in the blockchain cryptocurrency known as "Ripple."

The market value of Ripple has fluctuated far more as 2018 has progressed than has the market value of STX. The impressive thing about Seagate has been the company's commitment to its dividend, even when the stocks runs cold, and the yield soars to seemingly ridiculous levels.

I have been long STX long-term. The company has consistently increased returns to shareholders over that time.

2) Exxon Mobil (XOM) . Last sale: $81.88, Dividend yield: 4.01%. Folks looked at me sideways when I got into this one. No longer. Not only has the stock finally started to perform nicely, the month of May has been very kind to market prices for crude, as for the broader energy sector.

This is a somewhat new position for me (meaning that it was a 2018 purchase), and the name's underperformance was as much a reason for this investment as was the payout. You can substitute any number of "Big Oil" names here.

Be cognizant that some of my respected colleagues prefer Royal Dutch Shell (RDS.A) , which has admittedly been a better market performer this year.

3) Altria Group (MO) . Last Sale: $55.29, Dividend yield: 5.06%. This stock was simply crushed in response to earnings in late April. Earnings looked fine, though shipments were lower. That is when I got myself involved. Altria has traded sideways since.

This for me, is a pure dividend play. I am concerned about the future of tobacco, though. Because it kills people? No. I have chewed tobacco for nearly my entire adult life, and have smoked when necessary just to keep the bugs out of my face when forced to spend time in less-than-hospitable environments. Cannabis. The spreading legitimization of the cannabis trade will likely threaten life as we know it for big tobacco and for booze... or maybe that's the natural evolution of this business? In the meantime, get paid.

4) Procter & Gamble (PG) . Last sale: $73.96, Dividend yield: 3.86%. How interesting is this long? P&G was severely beaten in response to earnings-related guidance that ended up drawing downgrades from multiple analysts. It got to point where I was forced to pull the trigger in early May. Did I time the bottom? I guess so, if the world ends today.

Consumer packaged goods are trading in the hole. P&G is brand strong, and trades at a more than a fair valuation. On top of that, since December, the company has Trian Fund Management's Nelson Peltz on the board. Is he perfect? Heck, I don't even know the guy. However, I do know that he will pressure management into increased value creation.

Headline risks persist. However, for the S&P 500, there really are several key levels in play right now that also matter. Observe the following: 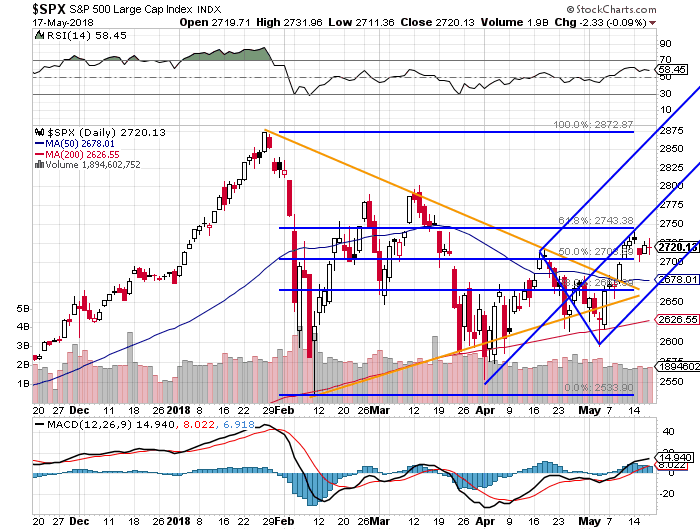 The "giant pennant", or converging triangle (orange lines) closed earlier this month. Typically, that causes a violent move, but does not determine direction. The breakout did come at that point and you now know that the breakout was northerly. That move came to screeching halt at 2743. Why is that significant?

The 2743 level just happens to be a 61.8% re-tracement of the move that begins with the January high through the February low. The central trend line of a Pitchfork model that begins with the April lows also ran through that spot at that time. A twice-enforced point of resistance. No wonder the market came in at that time. The 50-day simple moving average (SMA) now stands at 2678. The 2712 level has acted as the low sale for the index for two days running.

What does that mean? As support has been found at approximately halfway between perceived resistance, and prior perceived support.

I view this as confirmation of the uptrend momentum that we have recently seen, and would consider that to be short-term bullish. Just a kid with an opinion. Sarge out.

Get an email alert each time I write an article for Real Money. Click the "+Follow" next to my byline to this article.
TAGS: Investing | U.S. Equity | Cryptocurrency | Energy | Futures | Emerging Markets | Markets | China | Consumer | Dividends | How-to | Newsletter | Politics | Stocks