The closing bell had just stopped ringing. The phones certainly had not. It had been obvious to all of us for several hours now that equity markets had crashed. There were no circuit breakers in place. There were no algorithms. There were no methods of immediate electronic order execution in place. Bids and offers still had to be publicly (and verbally) announced at the point of sale.

My spot was just under the podium where television viewers now watch that already mentioned closing bell ring every day. The financial media still was not permitted on the trading floor. That was still several years in the future. They waited for us out on Broad Street... in hordes. They would wait for a while. Most of us would not leave the floor that night until close to midnight. Most of us would be in round the clock meetings... for a week. The date was October 19th, 1987. As a group, traders were physically depleted due to the labor intensive nature of the job in those days. We have experienced several market "crashes" across the decades that have passed since. Of course nothing even comes close in terms of what can be lost over a single trading session. Still, the money disappears... but, quietly. Maybe, just maybe that's even more dangerous. Maybe.

When? Tough question. One thing we do know though, is that highs and lows do happen, and the further down the road we go, there seems to be greater reliance upon speed, and less upon sentient price discovery at a centralized point of sale. You and I, and every honest person who watches the marketplace know that this is dangerous. If we are unable to ascertain the when, are we able to determine the why? Why will markets crash next time? Four obvious reasons are:

Eventual policy error is almost written in stone. The Federal Reserve is in a tough spot. No joke. The economy is growing. Q2 GDP, if you follow the Atlanta Fed, is running at an annualized pace of 4.1%. Inflation seems to be rearing its ugly head in spots. Gasoline prices are on the rise. Input prices are rising in terms of labor costs, and prices both paid and received at the manufacturing level. Still, the central bank continues to stay on the course of regularly scheduled normalization while drawing down the balance sheet. Dangerous? Of course. The inevitable conclusion is an overall reduction in liquidity for the economy in general. The only way for this to work is for the economy itself to expand faster, and consumer level inflation to outgrow the speed with which monetary conditions tighten.

Fed Chairs of yesteryear used to refer to this as "breakaway speed". Poor Jay Powell. Really. It's a tightrope that the central bank must now walk. Extremely loose monetary policy has helped this nation avoid a depression. Or was it merely a delaying tactic? Wage growth still has not picked up to the point of personal comfort. You just have to talk to people to understand that. Corporate earnings are excellent, as is forward looking guidance. That said, most of this guidance was computed using cheaper US dollars than we have this morning. Tighter monetary conditions equal even more expensive US dollars. There is no way around that. That will eventually be a headwind for US large caps, as will the fact that the rest of the planet just does not seem to be sticking to the whole synchronized global growth script. There are holes there.

2) The Complexity Of It All

Economies in general, and financial markets in specific are more complex than ever. To identify existing bubbles well enough to avoid exposure in a timely fashion is much more difficult than it was 20 or 30 years ago. Even if identified, are these areas easily avoidable? The next "Black Swan" event will not likely be something so obvious as an act of war (though, it could be). It could, and likely will come from an area of perceived safety. One grand example of this, in my opinion, would be the crowd mentality of passive investment. We have seen repeatedly since January of this year what happens when index or sector funds try to blindly rotate. Innocent parties get hurt along with the guilty. Guilty parties are rewarded along with the innocent, depending on what types of funds hold the shares.

We could go on and on. Leveraged and inverse strategies based on using instruments that can barely be described without referring to a quant. Central banks holding assets (such as stocks and ETFs) that they have no proper business ever holding, and of course... artificially impacting the price of credit across time. Does that pervert the legitimacy of price discovery? Well, no kidding, Sherlock. Does this blow up on somebody? Yes. When?

I loved the tax cuts. I bet most of you did too. It's plain to see that corporate America does as well. There is a date out there, kids. I can't tell you when it is, but there is a date when society in general will have to pay the piper. There is also a pretty good chance that both society and the piper will be angry on that day. This, unfortunately, is a problem many decades in the making, and this kind of deficit spending is now habit. Politicians can not get elected by promising to be responsible. They have to offer to give without taking.

Guess what? This growing irresponsibility is also global. In fact, it's rampant. The eventual reset is inevitable. Do we fear? No, we never fear. What do we do? We stay disciplined. We stay focused on mission. I can help you with that too. Let's explore.

These are well known, topical factors. That said, these items can cause plenty of volatility. They can cause headaches, but in the end they are usually tradable. What do I mean by this? Chaos in Washington? Instability in the Middle East? Trade concerns? China, NAFTA. Both sides play nice. Both sides play hardball. The president makes a peace offering regarding ZTE (ZTCOY) . China seems receptive. The administration pulls back on playing well with ZTE. China has North Korea pull back on meeting with South Korea, as well as the US.

This is all very cat and mouse and will both impact corporate input costs as well as earnings. That, in turn, will impact inflation. Then again, is it all part of the game? Does this type of unpredictable event force something along the lines of a policy error, or a pop somewhere unforeseen in a complex system?

I could tell you to buy gold now that the market price has come in on dollar strength. Actually that probably would be a wise purchase along with some stored clean water and canned foods. What we really have to do though, and what has served me well over the years is to simply trade the environment provided.

There is nothing wrong with preparing for a date with destiny. Just do not let that consume you. By embracing earnings growth, economic expansion, and lower tax rates, by embracing a core set of disciplines, and remaining flexible in the many ways available to traders out to derive some revenue, one can better, in fact much better prepare him or herself for whatever calamity might ensue. I do not see a crash in our immediate future. I do not see the potential for a US recession on our immediate front either.

By the afternoon of Friday, October 16th of 1987, I knew that markets would crash on Monday the 19th. I think everyone in the marketplace did. However, I did not see it coming on Thursday, the 15th, or even early in the trading session on the 16th itself. Point is simply that as individuals, the big picture is out of your control. Awareness, preparation, and discipline... well those things are entirely on you. Rock and roll.

The Soup Is Fine, The Chart Is Gross

Have any of you taken a recent look at Campbell Soup Company (CPB) lately? About a month back, Goldman Sachs placed a sell rating on this name. It would be nice to blame Goldman, but this stock has been in a steady decline for almost a year and a half now. Year to date performance has simply been dreadful. The firm reports tomorrow morning. The industry is looking for 61 cents a share on revenue of roughly $2.14B. That revenue number would be down sequentially, but up year over year.

The firm looks to this casual observer to be in an awful position. Debt dwarfs cash on hand. Current and Quick ratios (are really, really low, implying a potential inability to meet short term obligation) appear to be something out of a monster movie. The three year sales growth rate comes to a whopping -2%.

There are three statistics that do stand out as positive. The dividend yield stands at 3.6%. The stock trades at a forward looking valuation of just 12 times. Lastly, 13% of the entire float is still short, meaning that if the company can tell you a good story tomorrow, the potential exists for a serious price moving short squeeze. 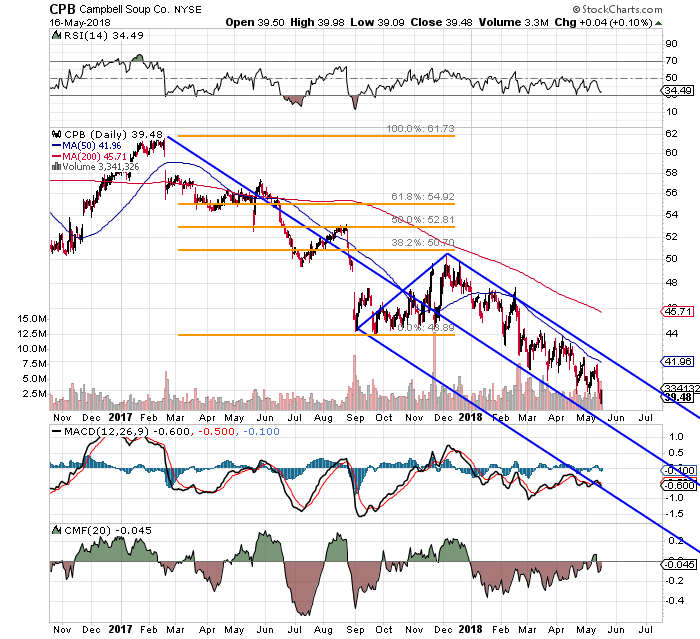 I think the Pitchfork pretty much tells the whole story here. I went into this analysis preparing to get myself involved. i just talked myself out of it. The stock will indeed likely move on Friday. The safe play would be a limited directional shot, such as a Bull Call or Bear Put Spread. I do not see the potential for great profitability on a short term spread. Nor am I able to make an instinctual call on direction. That said, I'm going to make like Johnny Unitas and pass.

On Campbell Soup, my trade idea is just don't.

Get an email alert each time I write an article for Real Money. Click the "+Follow" next to my byline to this article.
TAGS: Investing | U.S. Equity | Earnings | China | Markets | Consumer | How-to | Stocks

If You're Playing the Short-Selling Game, Make Sure You Have an Escape Plan

Getting caught in a short squeeze without an exit strategy is an even worse feeling that getting hit with fear of missing out on the way up.