TJX Companies (TJX) stumbled this week, breaking its April lows and testing its late January low. If prices cannot hold around $74 and rebound we are likely to see further declines and a move down to the November lows around $72.

Let's check the racks and shelves and charts and indicators to see if this decline is a bargain or whether things can get even cheaper.

In this daily chart of Action Alerts PLUS holding TJX, below, we can see how prices were rolled back sharply yesterday. TJX could easily have an "inside day" today after Tuesday's large high/low range. Even if TJX steadies today it actually does little to repair the damage that was done. TJX broke below the declining 50-day moving average line and below the declining 200-day moving average line.

The daily On-Balance-Volume (OBV) has moved sharply lower in recent sessions telling us that sellers of TJX have become more aggressive with heavier volume being transacted on down days. The daily Moving Average Convergence Divergence (MACD) oscillator is turning down below the zero line (again) for a fresh outright sell signal.

In this weekly chart of TJX, below, we can see how prices have broken below the now declining 40-week moving average line. The $72 level is key support right now for TJX and a weekly close below it is likely to precipitate further decline. The weekly OBV line has turned lower in the past two weeks. The weekly MACD oscillator looks to be rolling over for a test of the zero line and a possible outright sell signal.

In this Point and Figure chart of TJX, below, we can see how many times the $72 level held. A break of $72 opens the way for a decline to $68. A break of $66 will be even more bearish should it develop. 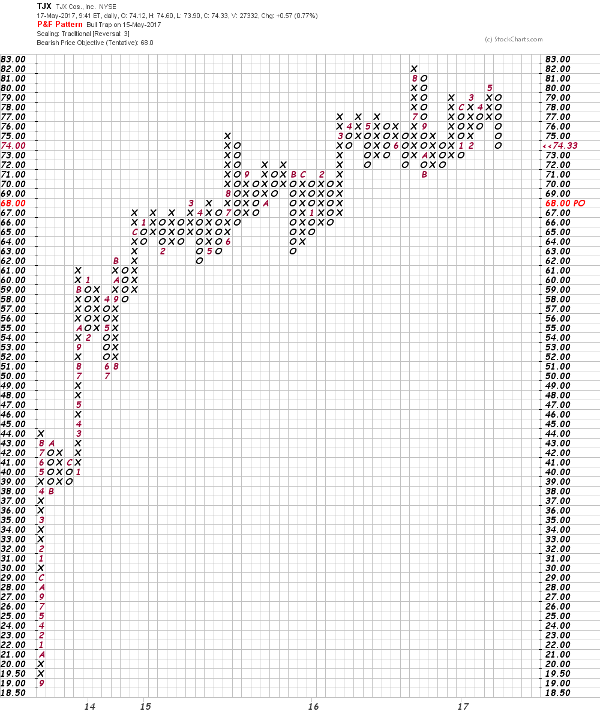 Bottom line: TJX could hold for a while but significant risk remains. The $76 to $80 area will act as resistance while $72 and $66 are key support zones to watch.