Home Depot, Inc. (HD) reported earnings Tuesday and dragged the Dow Industrials lower as it slumped more than $3 a share. Now that we have had a good night's sleep let's take a fresh look at the charts and indicators.

We last reviewed the charts of HD back in early February, noting that "the charts above indicate that HD might have further to fall from its $181.22 close. They anticipate a retest of the stock's recent $175 low, while a deeper loss to around $165 is possible if the ongoing market rout lasts another week."

Looking at chart this morning we can see that prices continued lower into early April but only fell to $170 and missed our $165 objective.

In this updated daily bar chart of HD, below, we can see that prices have been improving since the beginning of April and now the slope of the 50-day moving average line has finally turned positive. The slower-to-react 200-day line still has a positive slope and it looks like traders bought the dip to the line six weeks ago.

The daily On-Balance-Volume (OBV) line shows a decline from late January to the end of March indicating selling or liquidation. The OBV line has slowly improved but has yet to make a new high.

The trend-following Moving Average Convergence Divergence (MACD) oscillator moved above the zero line in late April for an outright go long signal but the two moving averages that comprise this indicator have narrowed and could cross to a take profits sell signal depending on the price action ahead.

In this weekly bar chart of HD, below, we have mixed technical signals. Prices are above the rising 40-week moving average line after a test of the trend in late March/early April.

The weekly OBV line peaked in January and has zigzagged lower the past four months. The weekly MACD oscillator is poised to cross to the upside for a fresh go long signal.

In this Point and Figure chart, below, we can see the improvement since April (look for the "4" on the chart). There is an upside price target of $193.41 projected but this is not a new high. 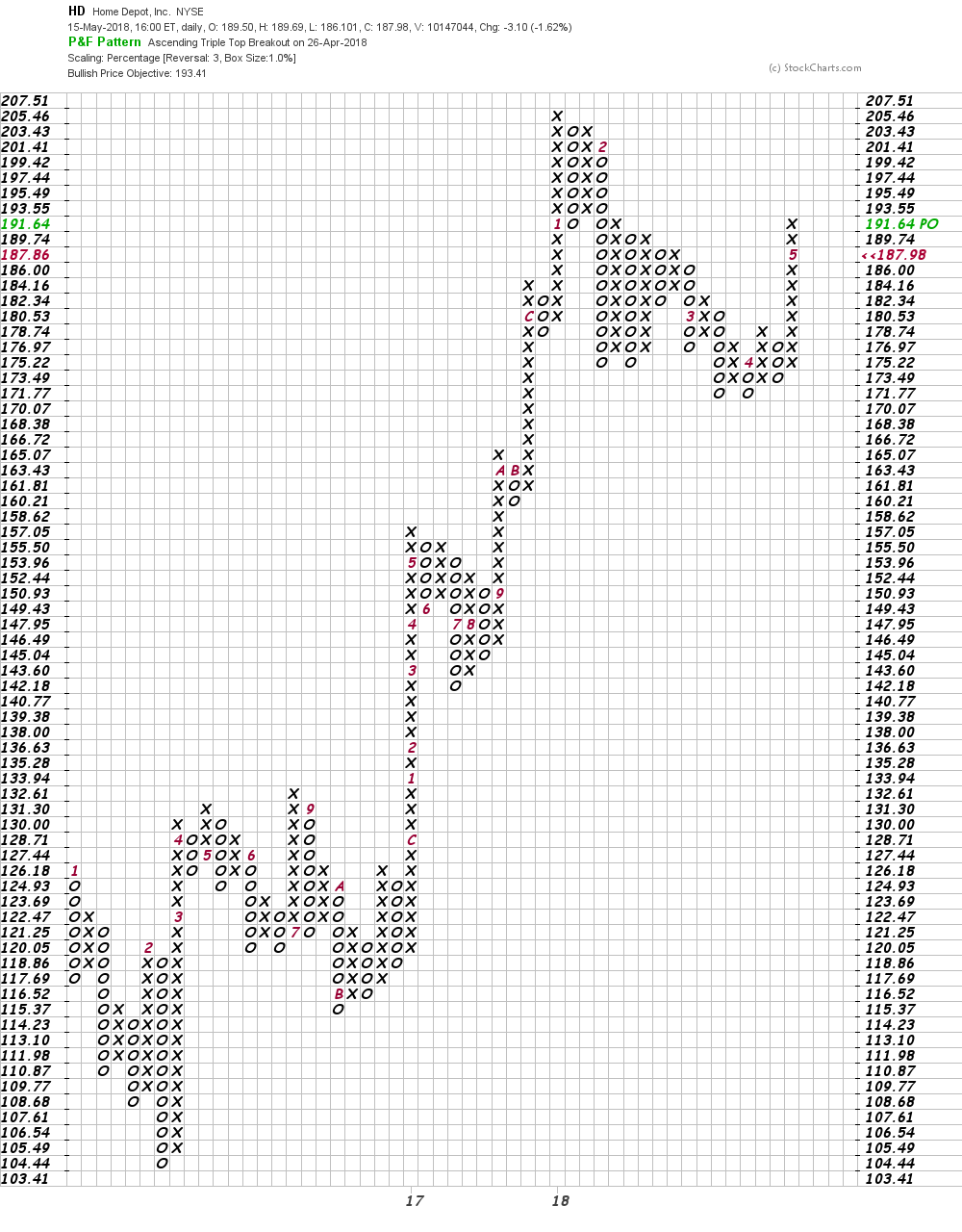 Bottom line: Prices have improved the past six weeks but the charts don't yet indicate that HD can break above its late January zenith. More sideways price action is probably necessary before HD can attempt to retest the $205-$207 area.

Get an email alert each time I write an article for Real Money. Click the "+Follow" next to my byline to this article.
TAGS: Investing | U.S. Equity | Basic Materials | Industrials | Stocks